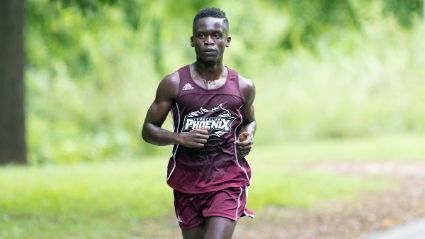 Garang Madut won the 5,000-meters and was part of the winning distance medley relay for Cumberland on Saturday at the Jessica Starks Open. (Credit Steve Wampler)

LEBANON, Tenn. – Danielle Craft won the triple jump, finished second in the 60-meters and fourth in the long jump, Kalea Barnett posted a victory in the shot put and Garang Madut finished first in the 5,000-meters and was a part of the winning distance medley relay, leading the Cumberland track teams on Saturday at the Jessica Starks Open in Columbus, Ohio.

Craft registered a time of 8.12 in the prelims and 8.14 in the finals to place second after winning the triple jump with a mark of 35-9. The Clarksville, Tenn., native jumped 15-7 to finish fourth in the long jump. Barnett claimed first in the shot put with a distance of 35-9 in the only other field event for the CU women.

Cumberland competes again next Saturday at the Tiger Indoor Invitational at the University of the South in Sewanee, Tenn.