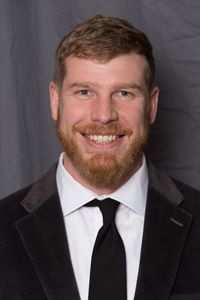 Register still holds the school record outdoors in the 400-meters at Belmont in 48.97 and spent three years with the Bruin track and field team.

After basic training he enrolled at Middle Tennessee, where he was a teammate of Scales and CU assistant coach Linnie Yarbrough. In March 2003, his National Guard unit was deployed for 16 months to the Middle East, predominately in Baghdad, Iraq, in service of Operation Iraqi Freedom. His National Guard service ended honorably in 2009, by which time he had achieved the rank of Sergeant and also earned a total of 16 honors and awards.

After returning from Iraq, Register enrolled at Belmont and was a member of school-record setting 4x100 and 4x400-meter relay teams as well as the 400-meter mark that still stands. He earned his bachelor’s in Religion and the Arts with a minor in Russian from Belmont in 2008.

Register received a master’s from the Yale Divinity School in 2011 before returning to Nashville where he taught religion as an adjunct instructor at Belmont and concurrently volunteered as a sprints coach with the Belmont track team.