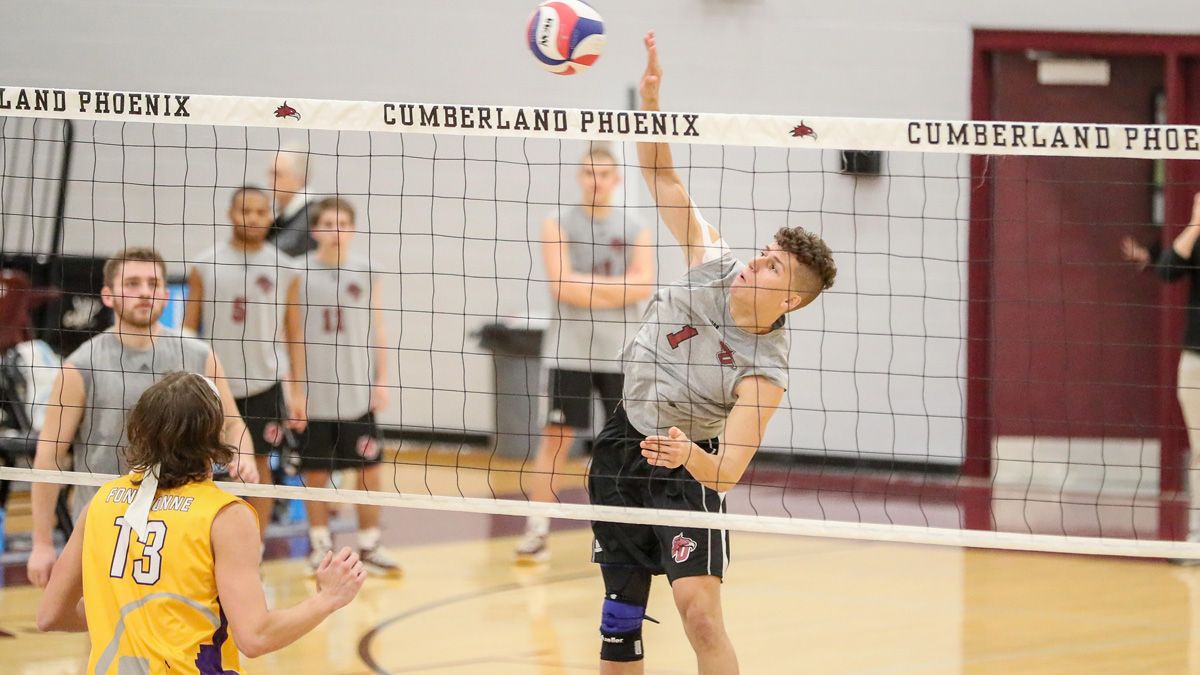 The Phoenix (0-4) lost in five sets to Morningside College and then dropped a straight-set decision to Briar Cliff University. Cumberland takes on fifth-ranked and host Park University at Noon Saturday and finishes the tournament with a 4 p.m. match versus seventh-ranked Ottawa University.

Lester collected 11 kills and Amorim and Stephan Davis recorded 10 apiece while Jordan Pierce handed out 28 assists in the five-set loss to Morningside. The teams traded sets until the end, with the Mustangs taking the first set, 27-25, the third set, 25-21, and the final set, 15-9. The Phoenix posted 256-20 and 25-14 set victories in the second and fourth stanzas.

Neither team led by more than two points until late in the opening set, with Davis and Lester each registering two kills early in the set for CU. Lester added two more kills to even the set at 14 and a block by Davis put the Phoenix ahead, 17-16.

Mason Chambers posted a pair of service aces for a 21-17 Phoenix edge, but Morningside ran off a 10-4 spurt to take the set. Four straight errors by Cumberland knotted the score at 21 before Davis answered with two kills for CU.

Brian Hogg’s service ace made it 25-24 Phoenix but a kill by Ryan Coyle and a service ace from Tommy Looper finished the set for the Mustangs.

Amorim’s first kill of the match and two service aces by Jaret Knight put CU in front, 6-2, early in the second set. Angel Acevedo Reyes added two kills and another ace from Hogg extended the lead to 11-5.

Lester registered two spikes later in the set for a 21-13 Phoenix advantage before Morningside ran off six straight points, but the Mustangs committed three errors and Tyler Sturzoiu added a service ace to finish the set for Cumberland.

The Phoenix trailed for most of the third set but never by more than three points until late in the set. Pierce collected three kills and Davis had one, cutting the Morningside advantage to 9-7, and kills from Amorim and Lester got CU within 12-11.

The Mustangs answered with an 8-3 spurt, but kills by Amorim and Lester along with two service aces from Chambers cut the deficit to 21-20. A pair of kills and then a block by Looper and Jimmy Aschenbrenner ended the set, 25-21.

Cumberland jumped in front early in the fourth set and never looked back, starting with kills from Davis and Acevedo Reyes and a block by Amorim and Davis. Two more kills from Davis extended the early lead to 8-3 for CU.

Lester registered three consecutive service aces and Chambers collected a kill for a 13-5 advantage and Amorim added two kills for CU. Morningside got as close as 18-12 but Amorim and Chambers posted a block and Amorim recorded two more kills in the 25-14 decision.

Pierce and Lester tallied a block and Lester registered a kill for a 5-4 Phoenix edge in the final set, but the Mustangs scored 11 of the final 15 points of the match behind kills from Coyle and Aschenbrenner. Four Cumberland errors helped as well before Jackson Presha collected two kills and a service ace and Coyle finished the match with a kill for Morningside.

Amorim netted 10 kills and Pierce and Hogg combined for 26 assists in a three-set loss to Briar Cliff.

The Chargers led early, 7-2, thanks to four kills but also three errors from Cumberland. Davis and Amorim recorded a block and Amorim and Lester added kills, but CU still trailed, 12-6.

Two kills by Acevedo Reyes and two errors from Briar Cliff got the Phoenix within 15-12, but the Chargers answered with two kills by Brandon Oswald and a block from Oswald and Tyler Godown put BCU ahead, 22-16. Daniel Borsi collected the last two points for the Chargers with kills in a 25-17 set victory.

The second set was much more back-and-forth, with Amorim posting two kills and a block along with Davis. Briar Cliff pulled in front, 14-10, with four straight points, including two errors by Cumberland, a block from Borsi and a service ace by Julien Dumas.

Amorim, Acevedo Reyes and Lester scored the next three points for CU, all with kills, but a solo block by Godown and then a block from Enrique Barajas and Godown pushed BCU ahead, 21-14. Barajas and Dumas each netted kills before the final spike from Oswald in a 25-19 set win.

Cumberland trailed early in the third set but two Amorim kills, one from Lester and a block by Chambers and Lester evened the score at nine. The teams traded points thanks to two kills by Amorim and then a block from Lester and Davis, knotting the set at 15.

Pierce and Amorim got a block to even for 18-all, but two kills by Borsi and Godown pushed the Chargers ahead. Jacob Ewart got the final points for Briar Cliff in the 25-22 set victory.