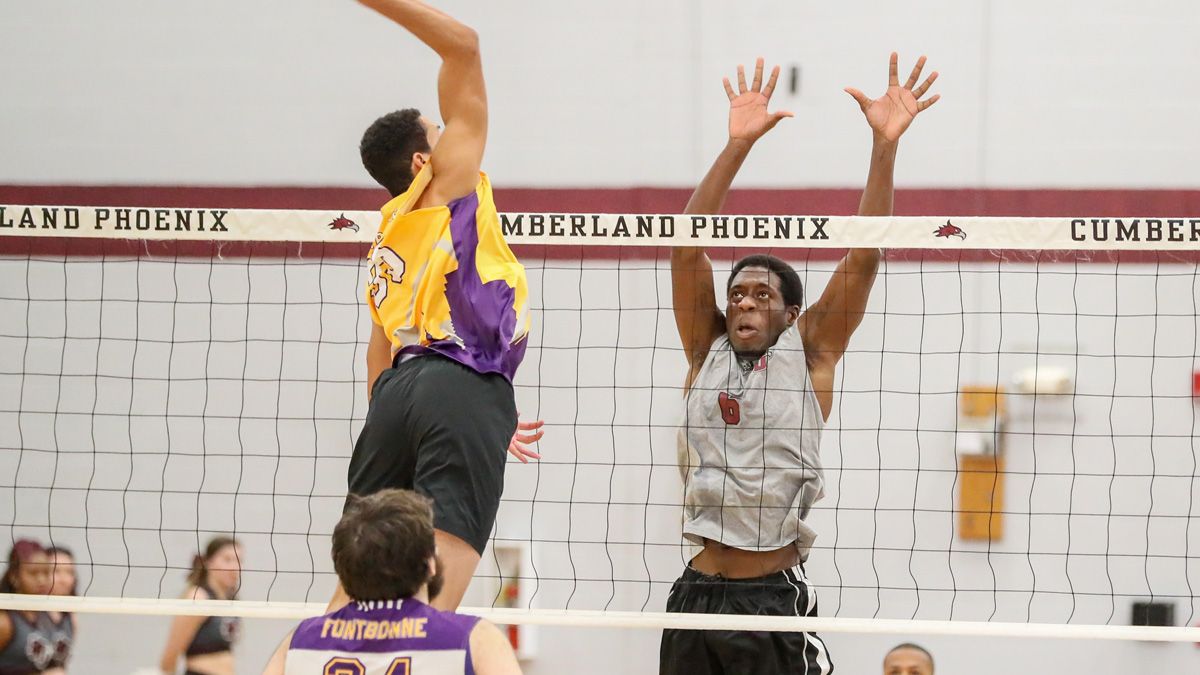 LEBANON, Tenn. – Stephan Davis and Arthur Amorim each recorded a combined 13 kills but Cumberland dropped matches to No. 5 Park University and seventh-ranked Ottawa University in men’s volleyball action Saturday at the Pirate Invitational in Parkville, Mo.

The Phoenix lost in three sets to the fifth-ranked Pirates, with Davis collecting seven kills and Jordan Pierce handing out 17 assists. Park hit .403 as a team in the match with 42 kills and just 11 errors.

Amorim added another kill and Pierce posted two straight aces before kills by Davis and Mason Chambers, evening the set at 19. Amorim, Acevedo Reyes and Davis collected kills for 22-all, but two kills from Park’s Felipe Guirau and a service ace by Andrea Maggio ended the set, 25-22, for the Pirates.

Davis recorded two kills and a solo block to start the second set, but Park ran off six consecutive points for a 10-4 advantage, including a block from Maggio and Hiago Crins. Acevedo Reyes posted a kill and combined with Christian Lester for a block before a service ace by Hogg made it 12-9.

Chambers added a spike and two errors by the Pirates kept Cumberland within 16-13, but a block by Maggio and Leandro Sodre sparked a 9-4 spurt by the home team to finish the set. Crins and Guirau posted kills and Crins and Petar Zinkovic collected a block before a final kill from Caio Alves ended the set, 25-17.

Guirau and Sondre and a solo block by Maggio were part of a 9-2 run by Park to start the third set. Lester posted two kills and he and Pierce got a block, cutting the deficit to 12-6, but a pair of spikes from Roman Tkachuk and one apiece for Sodre and Mateus Martins extended the Pirates advantage to 18-8.

Chambers and Lester each registered a kill and Davis had two before a block late in the set by Amorim and Pierce, but kills by Tkachuk and Zonkovic preceded the final two kills from Alves to end the match, 25-15.

Davis, Acevedo Reyes and Lester all recorded kills and Hogg added a service ace for a 5-3 edge in the opening set against Ottawa, but the Braves ran off five straight points behind two spikes from Brennan Hagar and one by Troy Lance.

Pierce posted two kills and a service ace before a kill by Amorim cut the deficit to 11-9. Ottawa reeled off 10 of the next 11 points to take control of the set thanks to five errors from Cumberland along with kills by Andrew Berthlett and Hagar and a block from Berthlett and Penieli Tulikihihifo.

Amorim and Acevedo Reyes got a block and Tyler Sturzoiu added a service ace while Lester and Acevedo Reyes added kills and Lester and Pierce combined for a block late in the set. Noah Mayeda, Fa’a Tafua and Lance tallied the final three kills for the Braves in a 25-17 set.

Davis posted two kills and Acevedo Reyes collected one to start the second set, with CU trailing just 8-7 after a kill by Pierce. Two kills by Hagar and one each for Mayeda and Tafua along with a block from Lance and Tafua were part of a 6-0 spurt by Ottawa.

Two kills by Amorim and one from Lester stopped the run and a kill and solo block by Davis pulled CU within 15-12. Amorim posted two more kills and Lester recorded one to make it 18-15, but spikes from Jacob Frederick and Tim Porter and two errors by the Phoenix pushed the Braves advantage to 23-18.

Amorim and Chambers combined for a block before kills by Tafua and Lorenzo Fabio finished the set for Ottawa, 25-19.

Davis registered two kills and Sturzoiu added one to start the third set for CU, but four errors by the Phoenix and two kills from Mayeda put the Braves ahead, 10-5. Pierce collected three straight service aces and a kill by Amorim along with a block from Lester and Acevedo Reyes pulled Cumberland within 13-12.

Kills by Mayeda, Hagar and Tafua along with two errors by the Phoenix stretched Ottawa’s lead to 19-15 and four more errors along with a kill by Ben Heese ended the match, 25-20, in the final set.

Cumberland returns to action this weekend Early Bird Invitational in Elgin, Ill., with the Phoenix taking on Robert Morris and host Judson University on Friday and facing Lawrence Tech and eighth-ranked Aquinas College on Saturday.