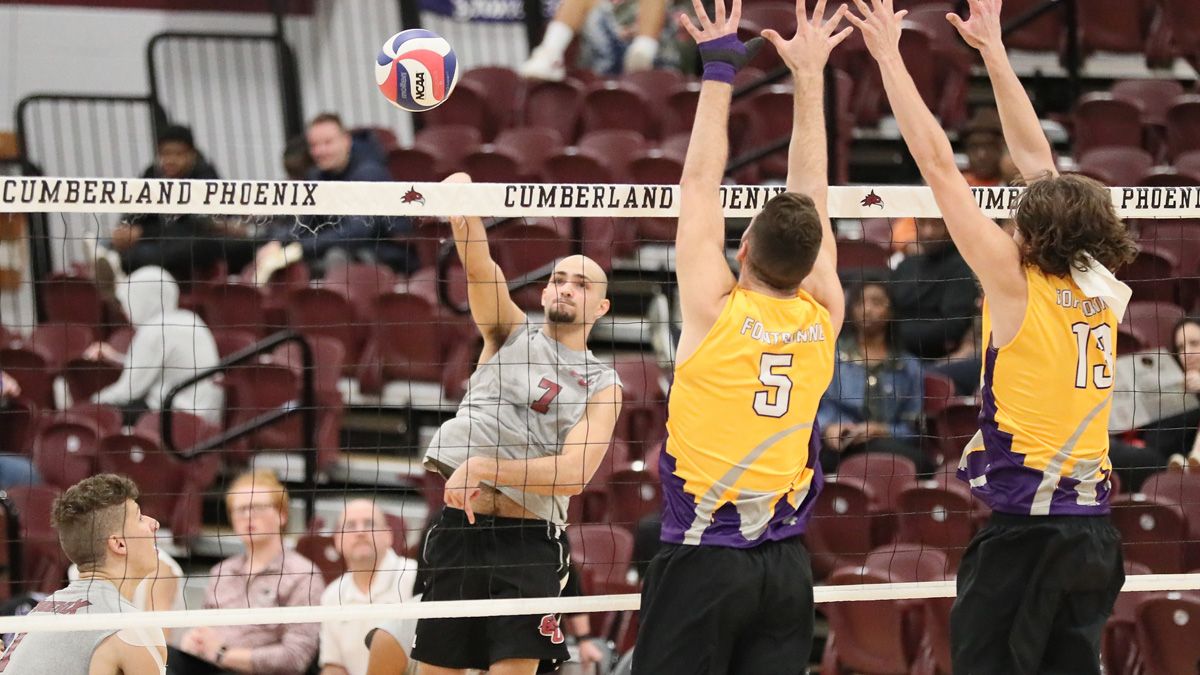 The Phoenix finish the tourney Saturday with outings against Lawrence Tech and eighth-ranked Aquinas College.

Cumberland played two very close sets versus Robert Morris, including 12 ties and three lead changes in the opening set, but the Eagles won in three thanks to 10 kills apiece from Manny Andrade and John Wazydrag.

Christian Lester and Acevedo Reyes recorded a block and Lester added a kill early in the first set for CU. Jordan Pierce and Amorim collected spikes to even the set at nine and a service ace from Tyler Sturzoiu tied it at 12.

Kills by Acevedo Reyes and Mason Chambers knotted the set at 19 and another from Acevedo Reyes made it 20-all, but Robert Morris posted five of the last six points of the set, including kills by Jordan Von Borstel and Andrade and two errors by the Phoenix.

Wazydrag started the second set with a pair of kills and Andrade collected a pair of service aces for a 10-5 RMU advantage. Wazydrag, Von Borstel and Andrade added kills, extending the Eagles lead to 14-8, but two spikes by Stephan Davis and a block from Amorim and Acevedo Reyes pulled CU within 14-11.

That was as close as the Phoenix would get, as Wazydrag tallied two more kills along with one each for Troy Teske and Bobby Ying. Joe Claffy and Andrade produced a block and the same two players got another on the final point of the set for a 25-19 RMU victory.

Amorim posted two kills and Lester recorded one as well for CU, but three Phoenix errors and another Wazydrag kill made it 17-6. Amorim and Pierce collected a block and Amorim registered three more kills in the set, but Andrade got two of the final four points for Robert Morris, including the final kill in a 24-14 set win.

Cumberland struggled in the first two set against Judson before 17 ties and eight lead changes in the final set.

Kills from Lester and Pierce and a service ace by Sturzoiu helped the Phoenix even the first set at nine, but the Eagles (both opponents are the Eagles) reeled off five straight points to take control of the set. Kulu Morando and Kaimi Ahn-DiFolco combined for two blocks and Ahn-DiFolco added a kill for a 14-9 Judson edge.

Morando and Chase Erwin got a block and Erwin collected a kill for a 16-10 Eagles advantage. Lester posted two spikes for CU and Jaret Knight had one kill before a service ace by Chambers and a kill from Acevedo Reyes pulled the Phoenix within 20-15.

Morando and Ahn-DiFolco registered another block and Morando contributed a kill in a 25-17 Judson win in set one.

Sturzoiu’s solo block and a kill by Davis helped Cumberland get within 7-6 in the second set. Jacob Wallin posted two kills for the Eagles, but Lester and Chambers combined for a block and Lester had a service ace to make it 10-all.

Morando and Ahn-DiFolco collected another block and three CU errors gave Judson a 14-10 lead. Chambers and Acevedo Reyes recorded kills for the Phoenix and Chambers added a service ace to get within 16-13.

Seth Kofoed and Javier Arreguin registered kills for the Eagles and Ahn-DiFolco tallied a service ace before Arreguin’s final spike for a 25-16 Eagles victory in the second set.

Chambers and Amorim collected a block and Davis and Amorim did the same two points later before a kill by Acevedo Reyes put Cumberland ahead, 9-6, in the third set. Four straight Phoenix errors gave the Eagles the lead but Acevedo Reyes and Lester each posted kills to get within 12-11.

Pierce and Acevedo Reyes produced kills for CU for a 14-13 edge, but Erwin and Arreguin answered with spikes for Judson. Acevedo Reyes recorded two more kills and Amorim added one for the Phoenix, evening the set at 21.

Amorim got two more kills for Cumberland late in the set, but a block by Wallin and two CU errors ended the match, 27-25.