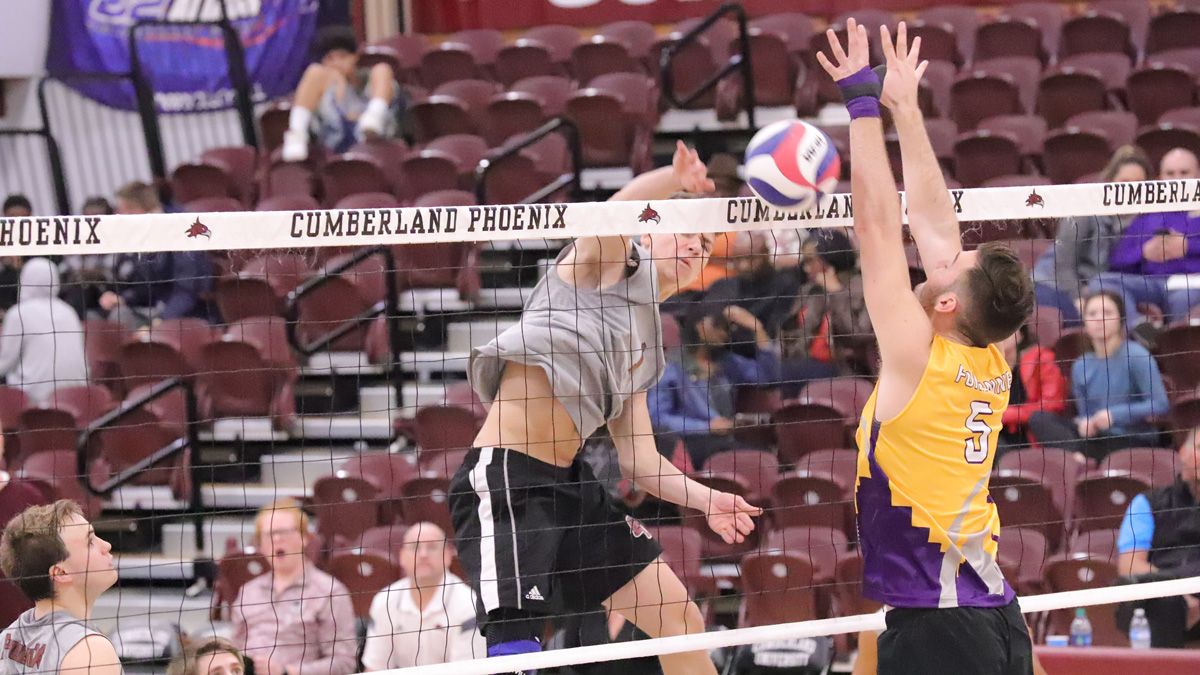 LEBANON, Tenn. – Arthur Amorim and Christian Lester each recorded five kills and Brian Hogg handed out 12 assists, but Lincoln Memorial hit .458 as a team in a 3-0 victory over Cumberland in men’s volleyball action Friday night in Harrogate, Tenn.

The Phoenix (2-15) registered almost as many errors (20) as kills thanks in large part to 16 total blocks from the Railsplitters (9-6). Stephan Davis and Angel Acevedo Reyes both netted four kills as well for Cumberland in the loss.

Acevedo Reyes and Davis collected kills and Mason Chambers and Amorim combined for a block early in the first set for the Phoenix, but LMU took a 9-4 advantage after blocks from Lucas Kerley and Evan Cory along with Nico Triana and Kerley. Kills from Jacob Titus and Cory made it 14-9 for the home team.

Lincoln Memorial collected the next seven points in the match, with Titus and Cory each contributing kills along with three Cumberland errors. Amorim’s spike ended the LMU run but Jordan Walley and Cory and then Triana and Walley registered blocks. Triana’s final kill ended the set, 25-12.

Amorim, Chambers and Lester all collected kills to open the second set for the Phoenix, but kills from AJ Risavy and Kersley along with three errors by CU gave the Railsplitters an 11-4 lead. Kerley tallied a pair of service aces before kills by Acevedo Reyes and Davis cut the deficit to 17-8.

Walley posted four service aces in five points around a kill by Randy Rivera. Davis netted a spike for Cumberland but a service error by the Phoenix finished the set, 25-10.

Lincoln Memorial jumped ahead early in the third set as well behind two kills apiece from Kerley and Cory for an 8-3 advantage. Two kills by Lester and one from Jordan Pierce made it 13-5 for the home team.

Cumberland traded points with LMU for a while, including kills from Acevedo Reyes, Amorim, Davis and Chambers, but LMU answered with spikes by Kerley, Titus, Risavy and Walley along with a block from Walley for an 18-10 lead.

Triana and Walley added kills before a spike by Titus and a block from Kerley and Triana, who finished off the match with a service ace.