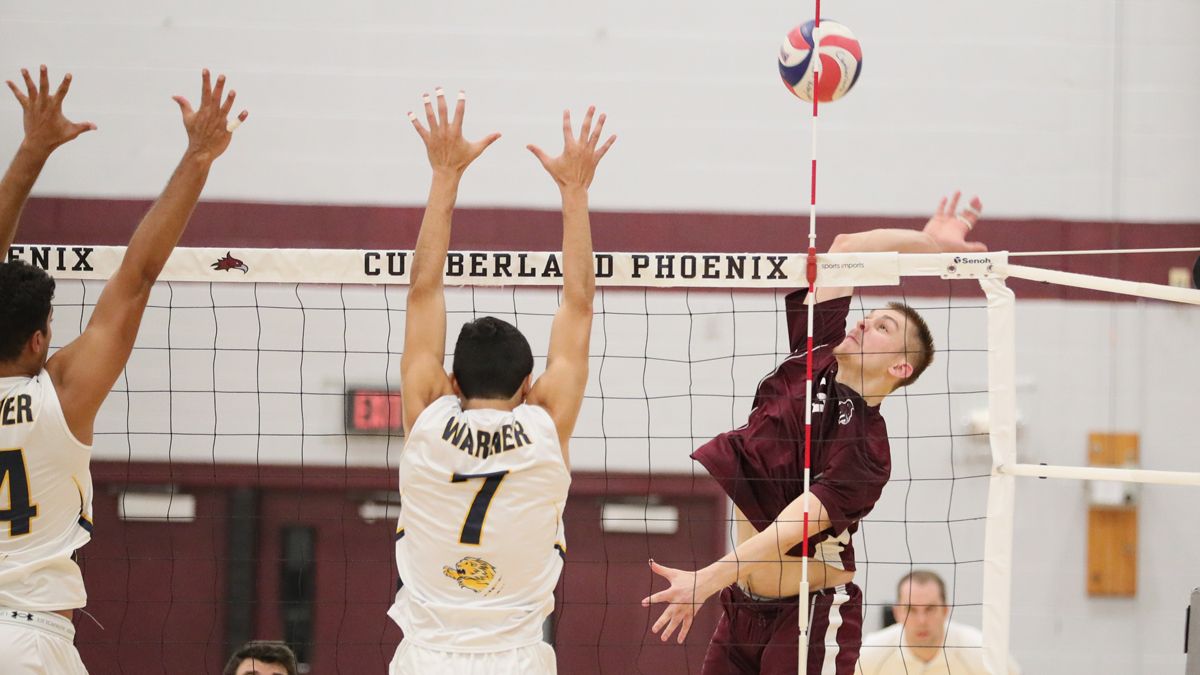 LEBANON, Tenn. – Mason Chambers registered 10 kills and Jordan Pierce handed out 15 assists for Cumberland in a 3-0 sweep against Midway University to end the regular season for the Phoenix in Midway, Ky.

Stephan Davis and Lester posted kills to erase an early deficit and Chambers and Pierce recorded spikes to even the first set at three. Acevedo Reyes added a kill for a 10-8 CU edge and kills from Arthur Amorim and Chambers made it 14-12 Phoenix.

Lester and Pierce combined for a block and Lester added a kill for a 20-13 advantage. Chambers registered two more kills and Amorim got the final one for a 25-17 set win.

Davis and Chambers started the second set with kills and Acevedo Reyes collected two as well, but the Eagles (3-13, 2-10) held a 10-9 lead behind two kills from Victor Pietro and one apiece by Eric Rosado and Gavin-James Andaya.

Lester, Pierce and Chambers netted kills in a four-point stretch and Jaret Knight added a service ace for a 17-12 Cumberland advantage, but a kill by Rosado, three CU errors and a service ace by Andaya evened the set at 17.

Pietro collected two kills, keeping the Eagles in front, 21-20, but Chambers answered with two spikes and Davis and Lester combined for a block. Tyler Sturzoiu’s service ace and a final error by Midway gave the Phoenix a 25-22 set victory.

Davis and Lester registered kills to open the third set for CU and a spike by Chambers made it 7-4 Phoenix. Amorim and Pierce posted a block and Pierce netted a kill before two from Acevedo Reyes stretched the Cumberland lead to 15-8.

Pierce and Amorim recorded another block and a Chambers kill pushed the advantage to 20-11. Lester and Acevedo Reyes added kills down the stretch and Midway committed an error on the final point in a 25-20 set.

Cumberland will participate in the Mid-South Conference Championships beginning next Friday, April 5, in Bowling Green, Ky.