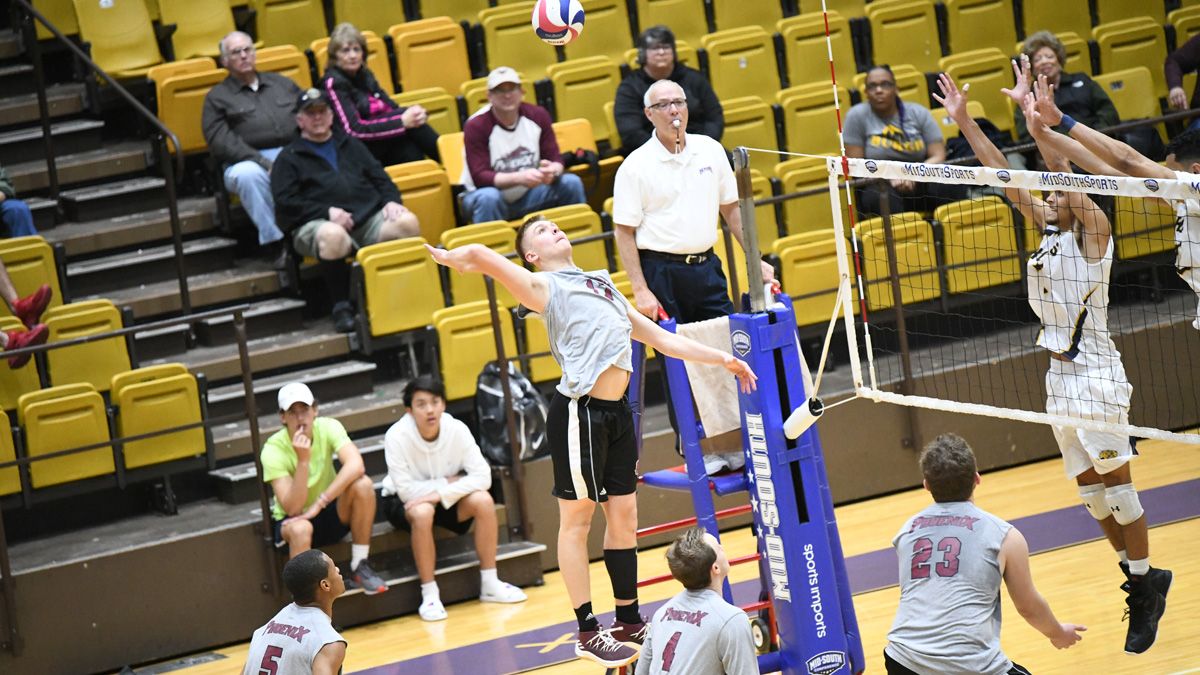 Cumberland takes on top-seeded St. Andrews University at 10 a.m. Saturday in the semifinals.

The Phoenix (11-23) committed just 14 errors in 90 total attacks and Arthur Amorim collected seven kills in the win for CU.

Amorim started the match with a kill for the Phoenix and Stephan Davis and Christian Lester posted a block, but two kills from Jose Morales and one each by Zion Hill and Jose Gonzalez along with three Cumberland errors put the Royals in front, 13-6.

Pierce and Amorim tallied a block and Amorim had two kills before one each by Chambers and Davis pulled CU within 16-12. The Davis spike started a 9-0 run for the Phoenix, with Pierce and Chambers contributing two kills apiece along with one by Lester for a 19-17 CU edge.

Three errors by Warner kept Cumberland ahead and Acevedo Reyes and Amorim got the final two kills in a 25-22 set win.

Lester registered two kills and a service ace early in the second set and a kill by Acevedo Reyes along with a block from Chambers and Amorim gave the Phoenix a 12-8 advantage. Chambers netted three straight kills and Hogg added a service ace, extending the lead to 17-11.

Tyler Sturzoiu added two kills and Pierce had one as well, making it 20-11 CU. The Royals answered with six consecutive points thanks to three Cumberland errors and a block by Gonzalez and Ytalo Vazquez, but kills by Amorim and Acevedo Reyes ended the spurt. Pierce posted two straight service aces to end the set, 25-18.

The Phoenix jumped out early in the third set behind three kills from Chambers and Pierce and one each by Amorim and Lester. Acevedo Reyes added a kill and the Royals committed four errors for a 14-7 CU lead.

Acevedo Reyes collected two more spikes and Amorim and Chambers got one each for a 19-11 advantage. Warner scored six straight points thanks to three errors from the Phoenix and kills by Morales and Gonzalez, getting within 19-17.

Acevedo Reyes ended the run with a kill and Chambers posted two kills sandwiched around one by Pierce. Acevedo Reyes tallied the final kill in the set, 25-21.