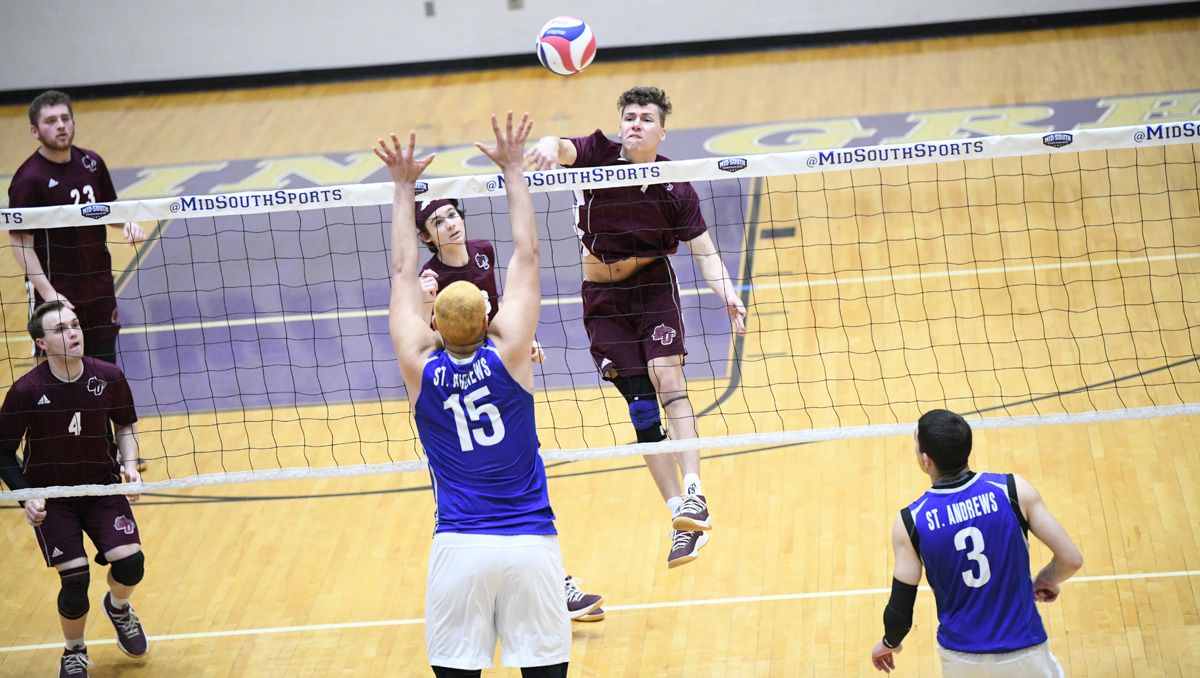 Amorim started the match with a kill for the Phoenix and Chambers registered a pair before one by Perice put CU ahead, 7-5. Lester and Pierce tallied spikes to even the set at nine and kills by Amorim and Chambers kept Cumberland within a point. Chambers and Lester netted kills for 15-all and a 4-0 spurt that included spikes by Pierce and Angel Acevedo Reyes put the Phoenix in the lead, 19-17.

The Knights scored three straight but a kill from Pierce and two St. Andrews errors made it 22-20 CU. SAU had two service errors, giving Cumberland a 24-22 edge, but two errors by the Phoenix and a block from Jacob DeSouza and Ben Twigger put the Knights in front, 25-24.

Lester answered with a kill for Cumberland, but DeSouza posted a kill and Edgar Huerta and Twigger ended the set with a block, 27-25.

Cumberland fell behind 5-1 in the second set before Amorim and Pierce pulled the Phoenix within 7-5. Acevedo Reyes added a kill and Amorim and Acevedo Reyes collected a block, keeping it a two-point deficit.

Stephan Davis provided a block and then a kill and Lester collected a kill and combined with Pierce for a block before an error by the Knights put the Phoenix ahead, 17-14. Kills by Pierce and Acevedo Reyes pushed the score to 20-17.

St. Andrews scored eight of the last nine points in the set, including a kill by Huerta and two from DeSouza along with a block by Nate Blackwell, Daryn Friedman and DeSouza. Friedman posted two straight service aces to end the set, 25-21.

Chambers registered five kills in the first seven CU points of the third set and Cumberland led 10-8 after three SAU errors. St. Andrews posted seven of the next nine points with kills by Blackwell, DeSouza and Huerta, but Lester collected a spike, pulling the Phoenix within 16-14.

Pierce and Acevedo Reyes collected kills and another by Amorim made it 21-20 Knights. Davis and Lester kept the Phoenix within a point and an error knotted the set at 24. Amorim tallied two kills to tie the score at 26 and 27 and a SAU error evened things at 28 before a kill by Huerta and a block from DeSouza and Twigger ended the match, 30-28.