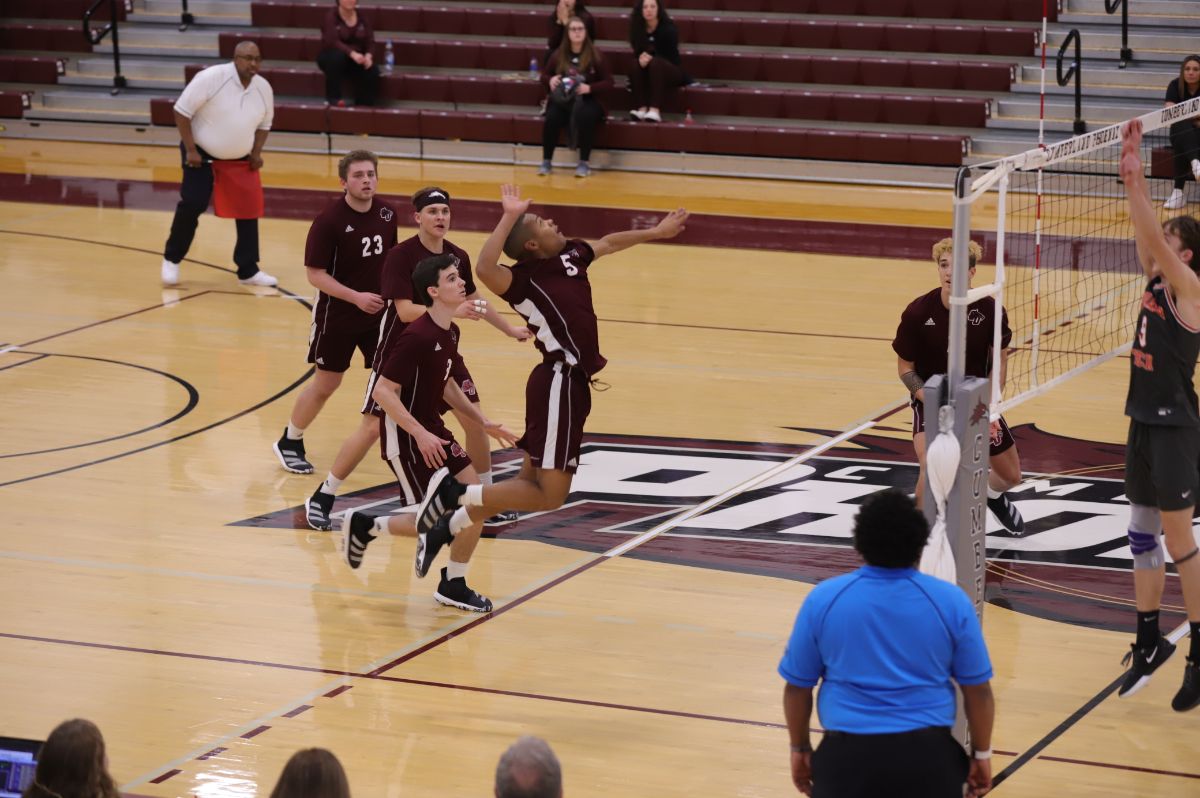 Hogg posted 20 assist and 11 digs, while Lester and Chambers contributed for 16 kills, but it was not enough as Missouri Valley posted 20 blocks and 57 kills as a team in 3-1 loss on Friday night.

Solo blocks by Lester and Chambers and help from a Warriors error allowed the Phoenix to take the victory in the first set, 25-21.

Indiana Tech came out strong in set two as they took a 3-1 lead and continued it to a 6-3 lead after miscues from the Phoenix and an aggressive kill by Indiana Tech’s Dante Siracsa. The Warriors continued to dominate the second set as they increased the lead to 11-3. The Phoenix finally seen life as they scored off an error by Indiana Tech’s Daynte Stewart. A spark started to light under Cumberland’s Offense as they were able to make a slight comeback cutting the lead to 17-14. A solo kill from Michael Conway and Chambers that were assisted by Hogg and Pierce helped the Phoenix cut the lead to just one and then furthering it to be able to tie the game 21-21. Cumberland was able to tie the set again at 24-24, allowing the game to go into extra set points. The set continued to go back and forth until Cumberland’s Kona Carruthers was able to connect on a missile of a hit allowing Cumberland to take the lead with a score of 27-26. An amazing attack by Hogg and an error by the Warriors at the end allowed the Phoenix to capitalize the comeback and be victorious over the Warriors in set two, 30-28

Set three continued to play out like the previous set with the game being back and forth. Until Stewart for Indiana Tech was able to score three consecutive points for the Warriors, making them lead over the Phoenix, 11-10. The Warriors continued to take a small lead until an insane rally by both teams finally came to an end as Cumberland’s Conway was able to capitalize off an assist by Pierce cutting the lead 17-14. The Phoenix continued to fight but weren’t able to keep up with Warriors, The Phoenix recorded three errors of the final points, allowing the Warriors to pull out victory in set three, 25-19.

The Phoenix started off strong to begin the fourth set by jumping to a 2-0 lead by a solo kill from Chambers. A few miscues on both teams allowed the score to be tied at five and was continued till the score was tied at 13. A quick turnaround for Cumberland allowed them to take a three point lead behind a kill from Carruthers and Lester. The Warriors were able to fight back after Indiana Tech’s Joseph Hermes was able to do a slight touch over the net allowing the Warriors to take a 21-19 lead. The Phoenix seemed to have taken their foot off the gas as they allowed the Warriors to take a 24-20 lead which then resulted into them winning the fourth set by a score of 25-20.

With the sets being tied 2-2, both teams came out aggressive as Cumberland started off with a quick 2-1 lead but was unable to defend against the Warriors as the score continued to be a nail bitter with the score being tied at 10. Lester and Chambers were able to continue to help the Phoenix as they both recorded a solo kill allowing the Phoenix to take a 13-12 lead. The Warriors were able to tie it, but a clutch ace point by the Phoenix was just enough to take the lead, which allowed Hogg to score the final point off a kill that was assisted by Pierce allowing the Phoenix to win in five sets, 16-14.

Set one against the Missouri Valley Vikings started off hot for the Phoenix as they were able to jump to a 3-0 lead after executing on three consecutive errors by the Vikings. A monster kill by Hogg and continues errors by the Vikings allowed the Phoenix to increase their lead to 8-2. A great save by Tyler Sturzoiu allowed Conway to increase the lead off a Hogg assist making the lead 14-6. A block and kill by Vitor Santos and a numerous amount of errors by the Phoenix allowed the Vikings to come back and cut the lead 18-15. Hogg was able to execute a kill off an assist by Pierce allowing the Phoenix to lead 22-18. Another block by Santos continued to help the Vikings as they cut the lead to 23-21 Phoenix lead. Errors on both side of the court resulted in extra set points but the Phoenix were able to win set one, 27-25 off a serving error.

The Vikings started the fourth set with a kill by Santos but Lester was able to match the point for Cumberland making it 1-1. Lester had another block shortly after and the Phoenix were able to execute off a block by Chambers and Carruthers to tie the game 5-5. A kill by Mickael Massaki sparked the Vikings offense to go on a 4-0 run until Hogg was able to record a huge block for the Phoenix, allowing the Phoenix to cut the lead to 10-8. Another kill by Lester and Hogg were not able to help the Phoenix as their errors were able to allow the Vikings to take over and win the fourth set 25-15.

The Phoenix will be competing in Day Two of the Cumberland Classic as they will be facing against Judson University and Lourdes University at 1 PM and 7 PM on Saturday, January  18th.