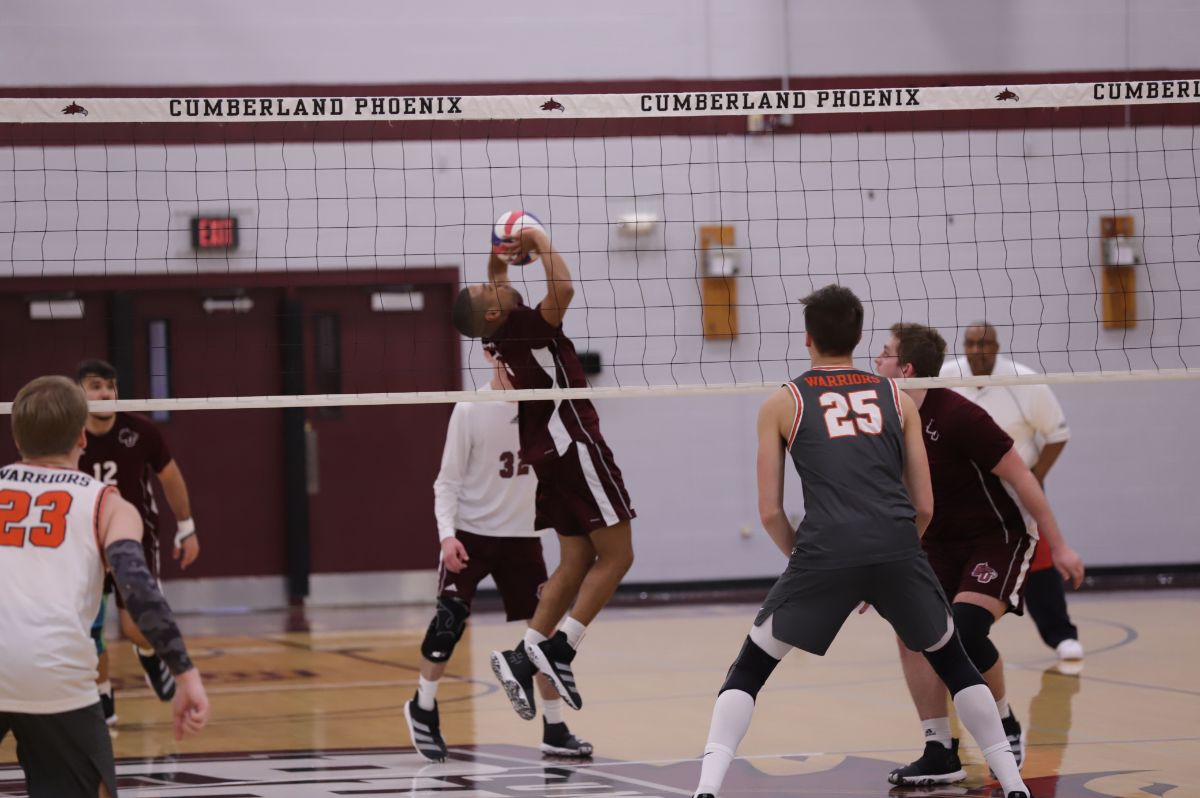 LEBANON, Tenn.- The Phoenix fell short in day one of the Viking invitational in Marshall, MO by losing to Park University Pirates, 3-0 and Missouri Baptist Knights, 3-0.

Mason Chambers led the Phoenix in kills with 15, as Brian Hogg led the team in assists with 35 in both games combined.

Set one was started off fast for both teams as Park began the game going up 2-0, but a kill by Michael Conway and Chambers was able to tie the game at 2. A serving ace and kill by Lester was just enough to put the Phoenix ahead 4-3. The Pirates attacked back with their own ace, and kill by Gabriel Soares which allowed the Pirates to take a 7-6 lead. Multiple errors by Cumberland allowed the Pirates to go on a run as they increased the score to 14-7. The Phoenix were able to take advantage of the Pirates miscues and cut the lead to 14-9.

Park was able to jump into another quick 2-0 start but the Phoenix were able attack back quickly from a kill by Tyler Sturziou and a bad set by the Pirates to let Cumberland tie the game up at 2-2. Kona Carruthers had an attack error for the Phoenix but was able to make up for it with a kill to tie the game up at 5. Multiple attacks by Lester, James Born and Conway allowed the Pirates to take a 13-5 lead. Conway was able to bring some life back for the Phoenix as he executed a monster attack that was assisted from Hogg to cut the lead to 13-6.

Cumberland started set three with the lead off a kill by Conway, but the Pirates retaliated back as they recorded three kills from Felipe Chagas and Hiago Crines, and two blocks which allowed them to take over the lead 5-1. The Pirates continued their run as Chagas recorded a block and Crines recorded another kill to put the Pirates up 8-1.

Cumberland started out fast in set one against the Missouri Baptist Knights as they took a 2-0 lead. A kill by Pierce, and Chambers which were both assisted by Hogg allowed the Phoenix to take a 6-2 lead after two kills by the Knights. A Serving error by Pierce allowed the knights to get back into the game until Lester had a monster attack on top of multiple attack errors by the Knights to let Cumberland take a 9-4 lead. Missouri Baptist fought back and brought the game to just a one point difference which came from kills by Mijan Kastratrovic and Mario Lucas.

Another kill by Kastratrovic and attack errors from Conway and Carruthers, allowed the Knights to take a 13-10 lead. A Serving error and double attacking errors by the Knights, allowed the Phoenix to cut the lead down to 15-14. After a kill by Lester to tie the game at 15, Drew Lliff for the Knights connected on a kill himself, which was on top of a serving error to help the Knights to keep the lead at 18-16. Another kill by Lliff helped the Knights increase their score but errors allowing the Phoenix to continue to fight as they cut the lead down to 20-18. Conway was able to come in with the clutch kill to cut the game closer but just wasn’t enough as the Knights were able to pull out set one with a score of 25-20.

An ace and kill by the Knights put them ahead of set three 2-0, but a kill by Lester and back to back blocks from the Phoenix allowed Cumberland to take a 4-2 lead. A kill by Kastratovic was matched by Chambers which continued the Phoenix to be ahead 6-5. The Knights began to go on a run as they were able to take advantage of attack error by Pierce and serving error by Chambers as they made the score 12-8. A kill by Lester and Hogg helped the Phoenix to cut the lead but continues miscues by the Phoenix allowed the Knights to keep a 15-10 lead.

The Phoenix will be competing in day two of the Viking Invitational on January, 25th against Lincoln College and Ottawa University at 10:30 AM and 1 PM