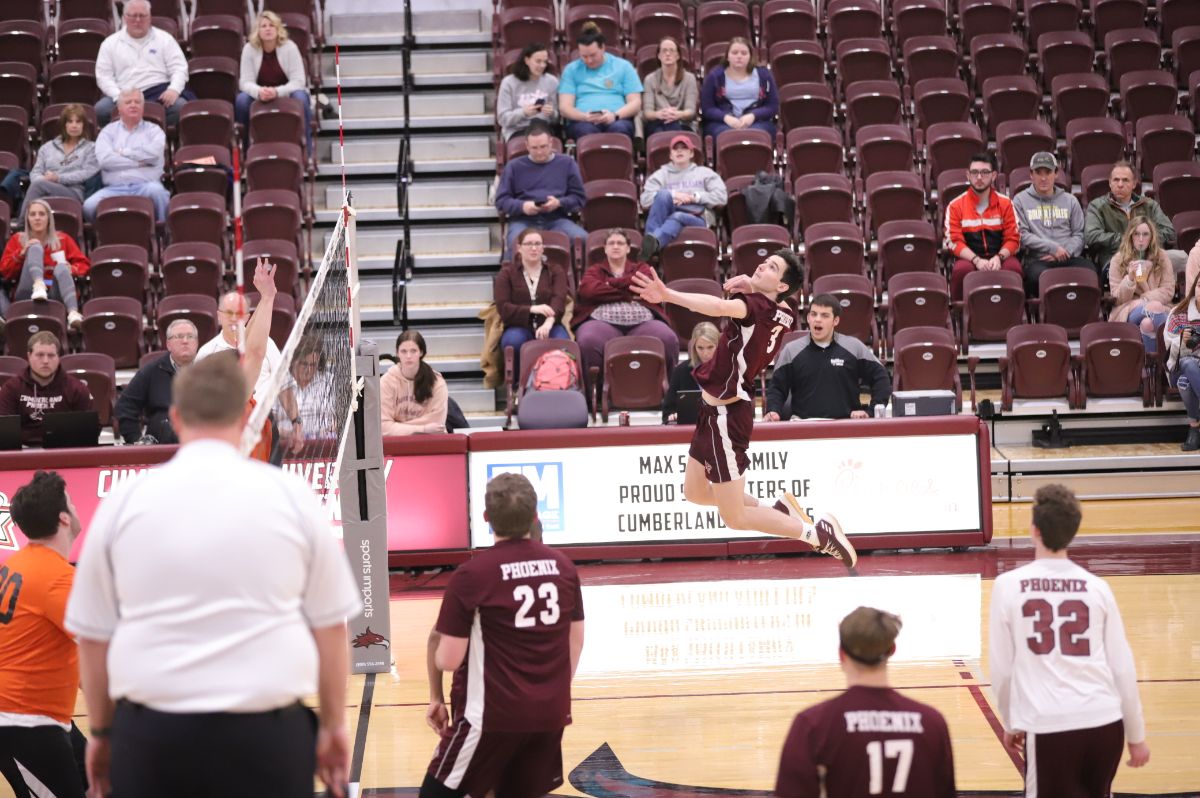 LEBANON, Tenn.- The Phoenix were able to split games in day two of the Viking Invitational by defeating the Lincoln College Lynx 3-0, but coming up short against to the #10 Ottawa University Braves, 0-3.

Mason Chambers led the Phoenix in kills with 23, as Jordan Pierce led the team in assist with 30 and Brian Hogg followed behind with 29 assist.

The Lynx jumped to a 3-1 lead in the beginning of the second set, a kill by Pierce and Chambers allowed the Phoenix to tie the game 3-3. A kill by Kona Carruthers and multiple attack errors by the Lynx let the Phoenix take an 8-7 lead. Back to back ace’s from Sturziou on top of a Lynx attack error allows the Phoenix to take a 13-8 lead. A kill by Chambers that was assisted by Hogg helped increase the score to 19-11 Phoenix lead. Two kills by the Lynx began to cut the lead down but a service error by the Lynx and an ace by Chambers ended the set 25-14.

Cumberland started set three with a quick 3-0 lead off of three consecutive attacking errors from the Lynx. An ace by Lester and a kill by Chamber increased the Phoenix to a 5-1 lead. Two quick kills by the Lynx were able to cut the lead but a pair of aces from Pierce, and a kill by Chambers puts Cumberland ahead 8-4. Another kill by Chambers that was assisted by Pierce on top of numerous attacking errors by the Lynx allowed the Phoenix to take an 11-4 lead. An attack error by Lester, and a set error by Pierce helped the Lynx cut the lead to 14-7.

A pair of attack errors by Ottawa’s Tyler Gardenhire continued to cut the lead for the Phoenix to 17-11. A crucial block by Carruthers and an ace from Lester allowed to only be down by 5. Continuous errors from the Phoenix put the Braves in match point, which then allowed Lance to take set one for the Braves with a score of 25-18.

A block by Carruthers and a huge kill by Born was just enough to tie the game at 17. The Braves began to go on a run until Chambers was able to connect on a kill to cut the lead 20-19. A kill by Lance and a serving error by the Phoenix put the Braves in match point. An attack error by Chambers allowed the Braves to take set two 25-21.

The Phoenix will continue on the road as they will be traveling to Crestview Hills, KY to compete in the Thomas More Classic on Friday, January 31st and Saturday, February 1st.