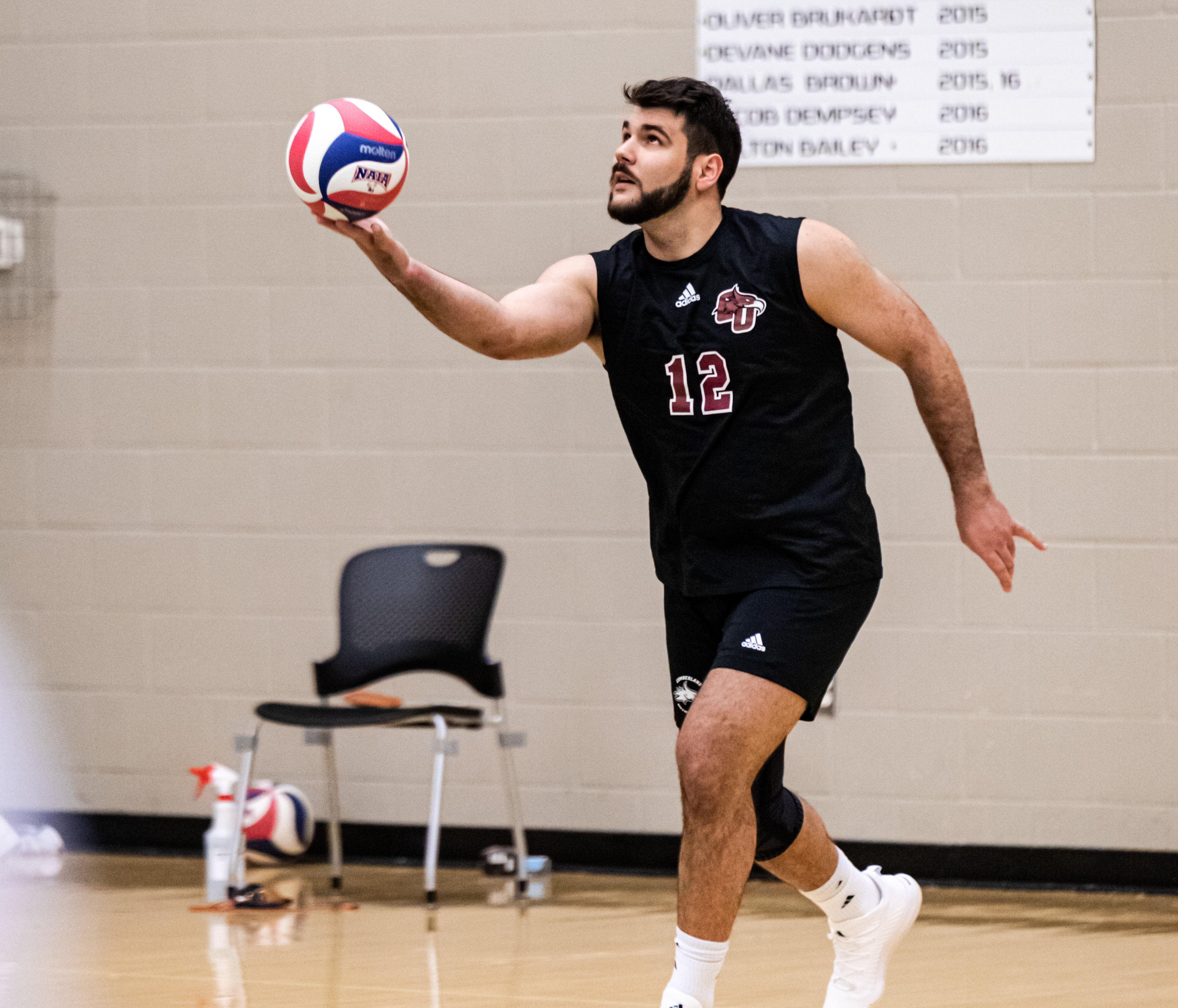 In the first match of what was a two-match Saturday, the Phoenix played a fantastic en-route to a 3-0 match win over Carolina University. Sophomore Outside Hitter Tyler Sturzoiu had a fantastic match for the Phoenix recording 16 kills with a hitting percentage of 0.571 while Sophomore Brian Hogg registered 31 assists total.

The first set was a tight one until a big run initiated by three errors by Carolina University ignited a 15-6 Cumberland run to close out the set 25-18. Sturziou had a big part in that with two service aces down the stretch.

The second set was a great showing from the Phoenix as they jumped out to a 17-8 lead with only four team errors and six kills total from Tyler Sturziou. Brian Hogg also pitched in 7 assists in the set to help the phoenix to a 25-10 set win.

The Phoenix found themselves knotted up at 12-12 with the Bruins after a handful of errors cost them the early lead. A big spike from Sophomore Middle Blocker Christian Lester turned the tides of the match for the Phoenix and started a 13-4 rally to close out the set and the match with a 25-16 win over the Bruins.

Statistically, as a team, the Phoenix registered 37 total kills as opposed to the Bruins 15 kills. Cumberland registered a hitting percentage of 0.280 in the match and also collected eight service aces. Christian Lester led the way Phoenix with eight digs.

The Phoenix played close sets with the Running Eagles, but lost 3-0 in the "battle of the birds." The statistical leaders for Cumberland in the match were Sophomore Outside Hitter Luka Ilic who had 14 kills and five digs while teammate Christian Lester recorded 10 kills and four digs.

The first set was a solid one by Cumberland in which they traded points with Life almost the entire way through the game and narrowly lost to 27-25. Sophomore setter Brian Hogg had a solid performance in the set, leading the Phoenix with 10 assists.

Cumberland fell in another tight set to Life that ended with a score of 29-27. Luka Ilic had a solid performance with five kills in a set that featured 34 ties and 56 rallies between both squads.

The Phoenix ran out of steam in the third and final set 25-20. After a big spike from Christian Lester to bring Cumberland back within two of Life, a series of errors cost the Phoenix the set and the match. Luke Ilic had a solid showing in the final set leading the team with four kills.

Life University led the way with a Hitting percentage of .229 as opposed to Cumberlands .102 on the day. The Phoenix recorded 35 total defensive digs in this match including 14 digs by Freshman Caleb Ginnings.

The Cumberland men next take the court against Grand View University Feb. 5 at 7 p.m. in a tri-match that includes games on Feb. 6 against William Penn University at 10 a.m. and Missouri Baptist University at 3 p.m. in St. Louis, Mo.