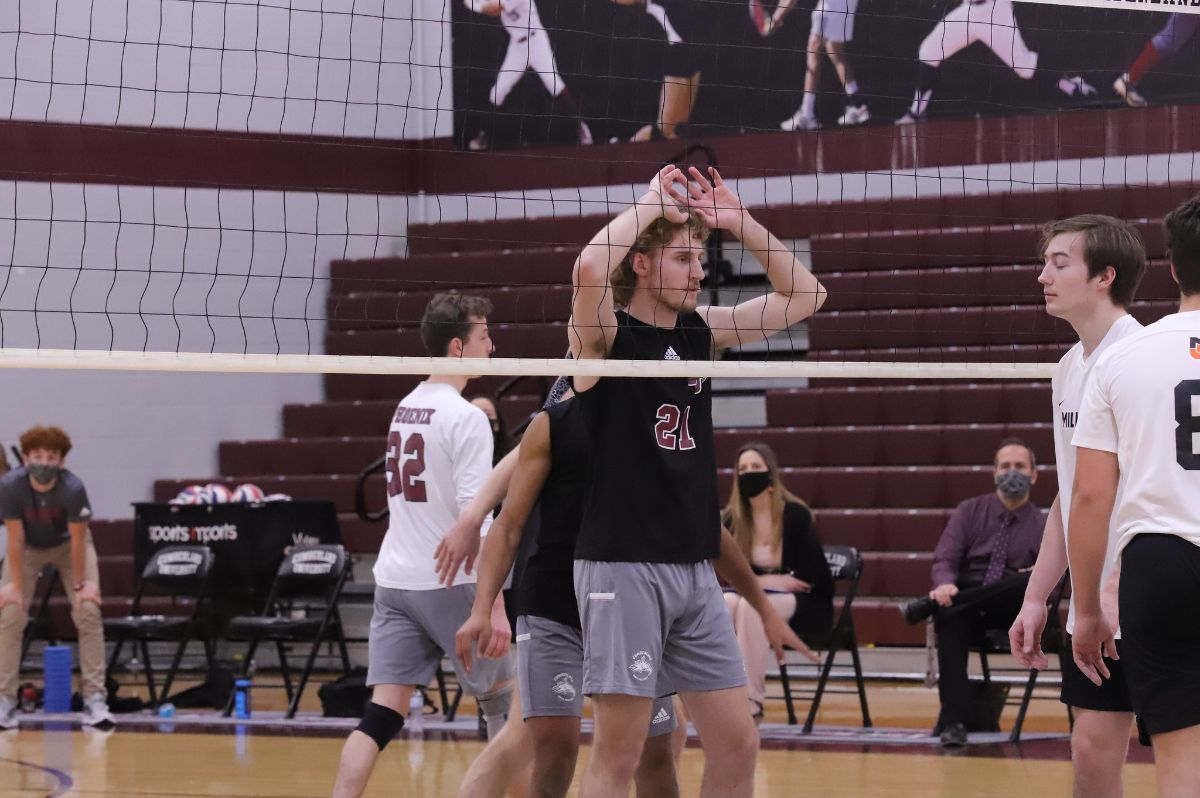 WALESKA, Ga.-- The Cumberland Men's Volleyball team fell to Reinhardt University 3-1 and defeated Webber International 3-2 on Saturday to move to 5-5 on the season.

The first set of the match was tight between the Reinhardt Eagles and the Cumberland Phoenix. The set was all tied up at 4-4 after errors by the Eagles got the Phoenix on the board. The Eagles found their offense and managed to jump out to a 12-7 lead. Cumberland managed to claw their way back into the set after a couple of big kills from Tyler Sturzoiu to make the score 18-15. Reinhardt continued to make errors that kept the Phoenix in the set. Christian Lester hit a big service ace to bring the Phoenix back within three points, trailing 23-20. The Reinhardt men left no doubts after two big kills gave the eagles a 25-21 win.

The Phoenix started the second set on a run, jumping out to a 6-3 lead after three big kills by Lester. The Eagles fought back by going on a run of their own to take a 13-11 lead over the Phoenix. Cumberland had multiple errors that put them down late in the set, but sophomore Luka Ilic hit two big kills to pull the Phoenix within one at 19-18. Similar to the first set, Reinhardt went on a 6-3 run to notch their second set win against Cumberland.

The Cumberland Men got their first and only set win of the match in set three with a 25-21 win over Reinhardt. The two teams traded points to begin the set and the Phoenix trailed 11-9. Christian Lester came up big for the Phoenix registering two big spikes to keep the team in the set at 15-12. The teams traded points again until Reinhardt was leading 19-16. Lester took the set into his hands at this point registering four kills that helped the Phoenix go on a 7-0 run to take a 23-19 lead. Luka Ilic recorded a big spike to give Cumberland set 25-21.

The Phoenix ran out of gas going into the fourth set going down 7-1 to the Eagles. Errors continued to plague the team as Reinhardt took a 14-7 lead. The Cumberland men started to claw back into the set, though after errors on the Eagle's end made the score 15-14. The offense of Reinhardt was too much for the Phoenix at this point as the Eagles cruised to a 25-21 set win and 3-1 match win.

As a team, the Phoenix recorded an overall attack percentage of .121 compared to Reinhardt's .127. The Phoenix also recorded 44 kills which top the Eagle's 41. Christian Lester had a good match for the Phoenix offensively recording 15 of the team's 44 kills. Defensively, Jordan Pierce led the way for the Phoenix with 11 digs. The sophomore also led the team in assists in the match with 31.

The first set of the match was an impressive performance from the Phoenix men's volleyball team. The men jumped out to a 7-4 lead over the Webber Warriors following three big kills from Christian Lester. Webber stayed in the match, though, and forced the Phoenix to make costly mistakes that would see them down 11-10. The Cumberland offense was relentless which forced the Warriors into making mistakes of their own putting the Phoenix up 19-14. After a series of heavy spikes from the Warriors, the Phoenix led 21-20. Cumberland managed to hold on after a Webber attack error gave the Phoenix a 25-22 set win.

The Cumberland men got off to a sluggish start in the second set, trailing Webber 7-3 early. Sophomore Mason Chambers hit two big spikes for the Phoenix to keep them in the set down 11-8. The Cumberland offense started to pick up after three straight kills by the Phoenix gave them their first lead of the set 16-15. Attack errors continued to plague the Warriors and build the Phoenix lead which stood at 24-19. Freshman Libero Caleb Ginnings hit a huge service ace to give the Phoenix a 25-19 set win.

The two teams battled back and forth in the third set, with both teams going on a series of runs to overcome large deficits. The Phoenix jumped out to an 11-6 lead after a big kill from Christian Lester. The Webber Warriors began to crawl back into the set, though after a series of errors by Cumberland shrunk their lead to 11-10. Tyler Sturzoiu got a 4-2 run going for the Phoenix after a service ace saw the Phoenix up 18-13. Webber crept back into the set and tied up Cumberland at 22-22. Webber scored three unanswered points to win the match 25-22.

Cumberland had some of the same misfortunes occur against them in the fourth set after going up 14-7 on a big kill from Austin Runyard. The Warriors battled back again to tie up the match at 15-15. The Warriors had found some momentum after coming back and followed that up with a run of their own to take a 20-18 lead. That run continued as Webber international cruised to a 25-22 set victory.

The two teams were evenly matched heading into the fifth and final set. The Phoenix started with some aggressive play that forced the Warriors into errors. Austin Runyard connected on a heavy spike to give the Phoenix a 5-3 lead. Errors on the Cumberland end allowed for Webber to get back in the match at 8-7. Cumberland called a timeout at that point and the team found their groove going up 10-7 on a big kill from Tyler Sturzoiu. The Cumberland run continued which gave the Phoenix a 14-11 lead. Webber made it interesting in the end, coming back to make it 14-13. Christian Lester finished off the set and the match with a big spike to give the Phoenix a 15-13 set victory and a 3-2 match victory.

As a team, Cumberland had 55 kills in the match compared to Webber's 34. the phoenix also boasted an attack percentage of .052 compared to the Warriors -0.026 percentage. Christian Lester and Mason Chambers led the way offensively for the Phoenix with 15 kills. Jordan pierce registered 40 assists in the match and also tallied a team-high 20 digs.