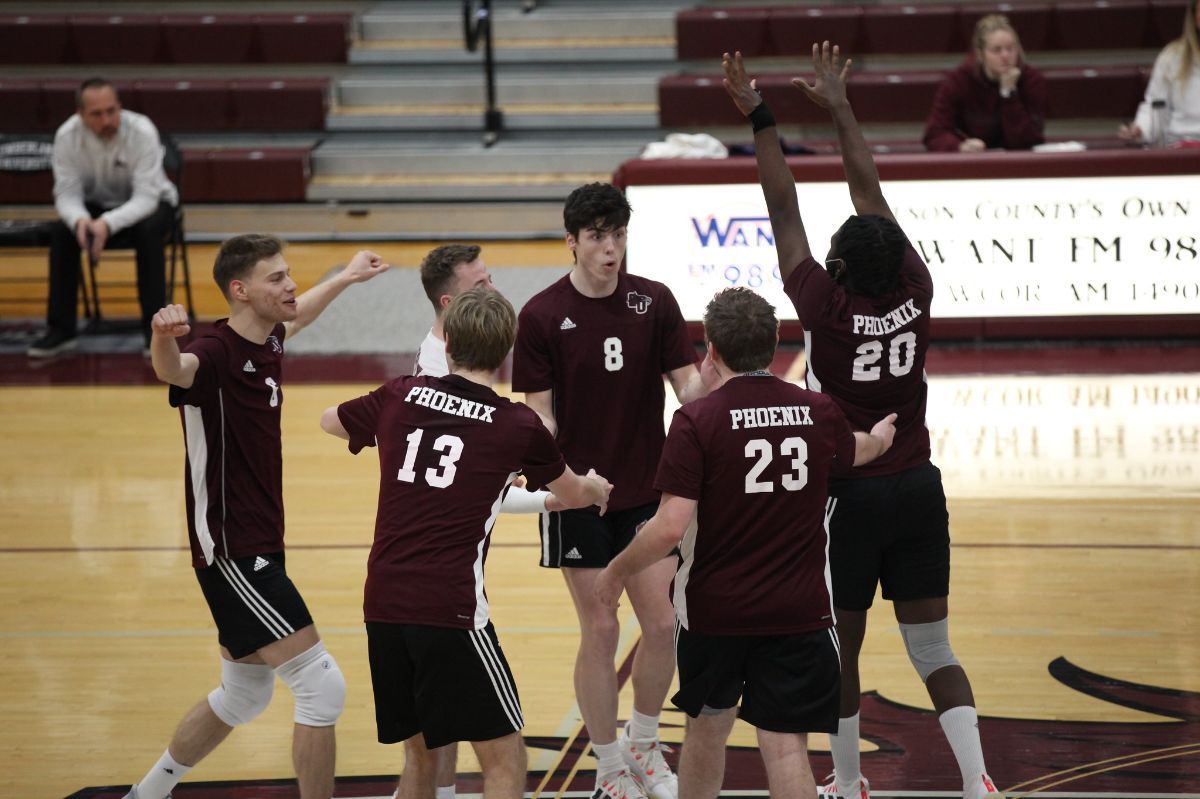 To open the day, The Phoenix handled Milligan with ease to earn their first victory of the season.

The Phoenix opened the first set with a 7-1 run capped off by an explosive kill from Codville Rogers. Milligan had no answers for the Cumberland attack early as they continued to roll to a 20-10 advantage. The Phoenix took the first set 25-13 over the Buffaloes.

The second set was closer than the first as Cumberland led Milligan by a margin of 6-5. The two teams battled until the 12-11 mark when the CU attack picked up steam. The Phoenix went on a 13-1 run capped off by a Christian Lester service ace to win the set 25-15.

The Phoenix continued to impress early on in the third set as they jumped out to an 8-1 lead. The CU attack put pressure on the Buffaloes throughout the match, forcing them to make many errors. The Phoenix widened the gap even more after a kill from Luka Ilic brought the score to 16-5. Cumberland cruised to their third straight-set victory following a heavy spike from Rogers to win 25-11.

Statistically, The Phoenix had about as good of a match as a team can have. CU had 38 kills to Milligan's eight, while also recording a .388 hitting percentage as a team. Luka Ilic led the way in terms of kills with 11 over three sets to go along with a .50 hitting percentage. Ben Douglas led the team with 31 assists while Christian Lester registered a team-high six digs.

Cumberland continued to ride the momentum in their second 3-0 sweep of the day in a victory over Carolina University.
The Phoenix took a 9-5 lead early in the first set after back-to-back kills from Griffin Newby. CU never looked back in the first set as they went on an incredible 16-7 run to close out the set 25-12. Newby led the team in kills in the set with four total.

CU got off to a similar start in set two with a 10-4 run to start the match. Newby was impressive at the start again with three straight kills on that run. The team continued to put up point after point en-route to a 25-17 set victory. Luka Ilic hit a missile of a kill to seal the final point for the Phoenix.

Set three was the closest set of the day to that point as CU led 11-8 at the midway point. Ilic was one of the best players on the floor in the third set as he connected on three kills. The Phoenix went on to win the third set by a margin of 25-16, securing their second 3-0 match victory of the day.

Much the same as they had done before, The Phoenix started their third and final match of the day against Kentucky State on a roll. CU opened the first set with a 7-3 run. The Thorobreds mounted a comeback, though, to trail by a margin of 16-14. Cumberland pulled it together as a team and went on an 11-3 run to take the first set 25-17 with the final point coming on a block by Austin Smalley.

The Phoenix once again continued their trend of fast starts as they lept out to a 9-2 lead. CU continued on their run as they led 16-7 after back-to-back kills from Newby. The Phoenix then did as they did all day and finished out the set with a 25-12 victory.

The momentum from the previous set carried over into the third set as the Phoenix led 9-4 early following a kill by Smalley. The team continued to rattle off kills the rest of the set and played relatively error-free volleyball. The Phoenix took the third and final set 25-10 and the match 3-0.

The CU attack was clicking in the match with 46 kills to KSU's 15 while also boasting a .481 hitting percentage. Christian Lester led the way with 15 kills and a .571 hitting percentage. Griffen Newby also tallied double-digit kills with ten in the match. Ben Douglas had another excellent performance while notching 36 assists across the three sets. Caleb Ginnings had the team's highest dig total of the day with ten in the final match.

Cumberland takes the court next Friday, Jan. 28 on the road against Trinity Christian University.