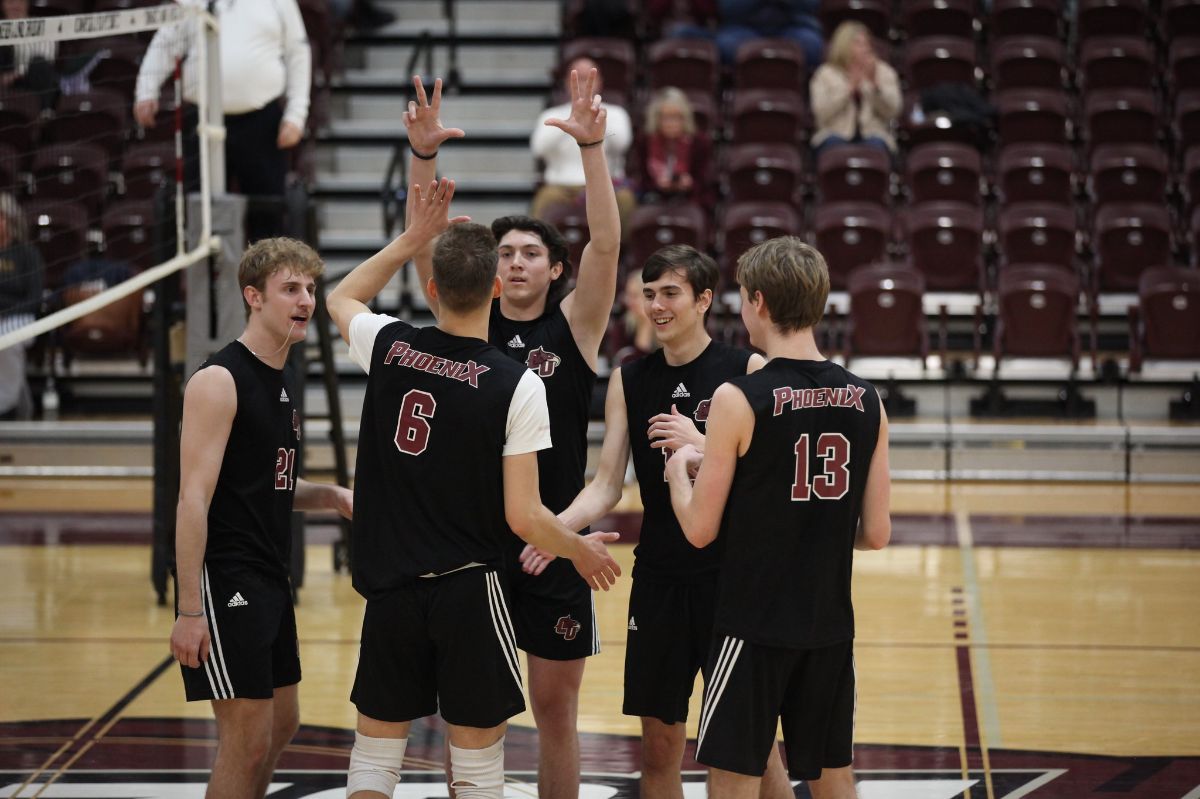 ST. LOUIS, Mo.-- CU Men's Volleyball (17-14, 7-6 MSC) went 2-0 on the road Saturday afternoon. The Phoenix defeated No. 3 William Penn 3-1 in the first match of the day to secure the program's first-ever win over a team in the NAIA Top 15. The team then topped the University of Health Sciences and Pharmacy in St. Louis 3-1 to end the day.

The Phoenix and the Statesmen played a tightly contested first set as the two teams ended up tied at 7-7 after the first 14 points. William Penn went on a 6-2 run to lead 13-10, but Cumberland battled back to trail 14-13. The Phoenix stayed in the set, forcing the Statesmen to make three straight attack errors to tie it up at 21-21. The Statesmen went on to edge out the Phoenix in the first set 25-22.

From the beginning of the second set on, the match was all CU. The aggressive attack from the Phoenix forced the Statesmen to make five straight errors, giving CU a 10-5 lead. The Phoenix would not be denied, as kills from Austin Smalley and Codville Rogers pushed that lead to 15-11. Three straight kills from Christian Lester, Smalley, and a team kill gave Cumberland a commanding 23-15 lead. An error from William Penn gave the Phoenix a 25-19 set win to tie the match 1-1.

CU picked up right where they left off in the second set as they jumped out to a 10-6 lead over the WP in the third set following a kill by Jordan Pierce. The team held around a five-point lead for much of the set, eventually pushing that lead to 17-10 after an error by the Statesmen. William Penn made it interesting, coming back to trail by only one point at 19-18. The Phoenix held on and went on a 6-4 run to close out the set 25-22 following a clutch kill by Smalley.

Heading into the fourth set with the possibility of closing out their first win over a top 15 ranked team, the Phoenix lept out to an 11-4 lead. The team had a sequence where they scored six straight points. Cumberland kept rolling, eventually pushing that lead to 19-11 after a kill by Austin Runyard. The Statesmen showed why they were the No. 3 team in the country as they came back to trail 23-21. The Phoenix scored a clutch two points highlighted by a kill from Luka Ilic to win the set 25-22 and the match 3-1 over the third-ranked Statesmen.

In terms of team stats, neither team had a high attack percentage as the Cumberland mark of .142 topped the William Penn mark of .131. The Phoenix, however, did total 52 kills compared to the Statesmen's 43. Cumberland also had the better day defensively with 53 digs as opposed to the 44 of William Penn.

Two members of the Phoenix ended the day with ten plus kills as Rogers led the way with 13, and Smalley ended with 10. Lester had eight, followed by Pierce and Runyard with seven each. Caleb Ginnings was very active defensively as he collected 25 digs throughout the match. Pierce also chipped in 12 digs to go along with a whopping 42 assists on the team's 52 kills.

Cumberland came into their second match of the day, riding their momentum from their earlier victory. CU jumped out to an 8-4 lead over UHSP following back-to-back errors from the Eutectics. The Phoenix managed to push their lead to 16-9 following a kill by Christian Lester. The Eutectics w made it interesting, coming back to trail 17-14. The Phoenix went on an 8-4 run to close out the set 25-21 over the Eutectics. CU scored the winning point on a kill by Ben Douglas.

Set two was a much different story for the Phoenix as the Eutectics led the Phoenix 9-7 after the first 16 points. UHSP pushed that lead to 15-10 after a sequence that included four straight attack errors by the Phoenix. The Eutectics went on to take the second set 25-18 over the Phoenix.

Cumberland responded well in the third set, leaping out to an 8-5 lead after a kill from Austin Smalley. The eutectics rallied and tied the Phoenix at 13-13. The two teams played point for point until the 17-17 mark in the set. Cumberland rattled off an 8-2 run to take the set 25-19 and lead the match 2-1.

The Phoenix rode the momentum into the fourth set as they grabbed an 8-4 lead after the first 12 points. Cumberland pushed that led to 12-6 after a series that included back-to-back kills from Christian Lester. The Phoenix would not be denied as the team cruised to a 25-15 set victory with the final point, coming on a Caleb Ginnings service ace.

Cumberland had a great match statistically, with a team hitting percentage of .224 and 54 total kills over four sets. The Phoenix also recorded more digs than the Eutectics with 49 total. Leading the way for the team individually were Codville Rogers and Austin Smalley, who both ended the match with 12 kills. Ben Douglas and Christian Lester had the second-highest kill totals with nine each. Caleb Ginnings led the team with 18 digs while Jordan Pierce totaled 41 assists.