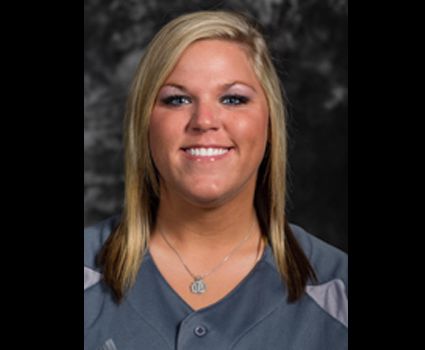 LEBANON, Tenn. – Redshirt senior Emily Nicholson collected six RBIs in a 4-for-6 day at the plate as the Cumberland softball team swept Union College, 2-0 and 5-4, in an opening day twinbill here Tuesday at the CU Softball Field.

Nicholson plated one in the first game and five more in game two, including the game-winning RBI in the bottom of the fifth inning. Tied at 4-4, Sydney Broderick singled to open the frame as Katelynn Stoll entered to pinch run for the catcher. Following a sacrifice bunt from Jessica Roper, Nicholson delivered the clutch RBI to give Cumberland (2-0) the lead.

Senior pitcher Jessica Lozano (1-0) took care of the lead, pitching 3.2 scoreless innings in relief, including perfect sixth and seventh innings to shut the door and earn her first victory on the young season.

The Bulldogs wasted no time getting on the scoreboard to open the season, plating a run in the bottom of the first in game one. Devon Jamerson reached on an error and advanced to second on a Megan Kelley sacrifice bunt. Following a groundout that moved Jamerson to third, Emily Nicholson singled with two outs to give Cumberland a 1-0 advantage.

That was the only damage starting pitcher Courtney Maynard (1-0) would need as the right handed senior blanked Union (2-4) in seven innings of work. Maynard scattered four hits throughout the contest, walking none while fanning three.

CU added an insurance run in the bottom of the sixth to give Maynard some breathing room. Sydney Broadrick reached on an error, and Katelynn Stoll came on to pinch run. Following a walk from Jessica Roper and a wild pitch to advance Stoll, a groundout from Sarah Murray capped the scoring in the 2-0 win.

Nicholson delivered in the first inning of the second game as well, coming up clutch with two outs. With runners on first and second and two away, the redshirt senior blasted her first home run of the season to left field, giving the Bulldogs a 3-0 advantage.

The two squads traded runs in the third inning to push the score to 4-1. Nicholson recorded her fourth RBI of the game and fifth in the two-game set on a single to left field to plate Kassydi Montgomery.

Union evened the score in the top of the fourth inning, plating three runs to chase starting CU pitcher Caroline Curran. Back-to-back singles opened the stanza and a fielding error loaded the bases for Andrea Foster, who delivered a double to center field, bringing home all three runners.

Cumberland takes the road Monday, for the first of four dates and eight games away from home. Monday will feature a doubleheader against Georgia Gwinnett in Lawrenceville, Ga., before the Bulldogs travel to Franklin Springs, Ga., for a twinbill with Emmanuel College.