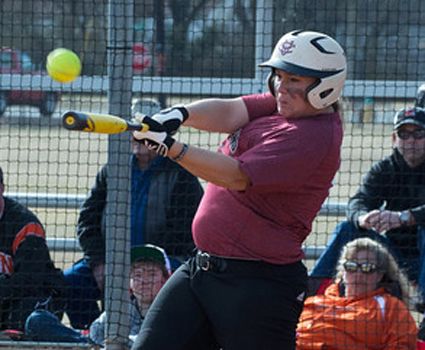 The two squads squared off on an all-turf baseball facility home to the West Virginia Miners, a collegiate summer ball team in the Prospect League, as the Bluefield Softball Field was inundated with snow during the week.

Cumberland (17-3, 6-2 Mid-South) scored early and often in game one, a five-inning 18-0 victory. The Bulldogs scored three in the first, five in the second, three in the third to jump out to an early 11-0 lead.

Montgomery led off the game with a single into left centerfield and moved to second on a passed ball. Devon Jamerson reached first on a walk, and one batter later, Roper singled through the right side to give the Bulldogs a lead.

Jamerson scampered home two pitches later on a wild pitch with Nicholson at the plate and the first baseman followed with an RBI single to bring home Roper.

Montgomery got in on the RBI action with a single up the middle in the second inning, bringing home Katelynn Stoll, who stood on second after a one-out double. Back-to-back singles from Jamerson and Sydney Broadrick loaded the bases for Roper, who knocked in another run on a groundout.

With two on and two out, Nicholson followed with a shot over the left field wall on a 3-0 count to push the advantage to 8-0.

An error and a single from Kaleigh Pearce put a pair of runners on in the third inning, bringing Montgomery back up to the plate. The Hendersonville, Tenn., native promptly lifted the first pitch she saw out of the park to give CU an 11-0 lead.

The hit parade continued in the fourth when the Bulldogs brought 11 hitters to the plate en route to a second five-run frame. Doubles from Nicholson, Sarah Murray and Tessa Tomaselli brought home the first two runs with just one out in the inning.

Megan Kelley followed with another double to plate Tomaselli, and Jamerson made it 15-0 with the fifth two-bagger of the inning. A throwing error allowed one more run to score in the fourth.

Tomaselli notched the third round tripper for Cumberland with one away in the fifth, and Kelley scored four batters later on another error, the final score of the 18-0 game.

On the mound, redshirt senior Courtney Maynard scattered four hits during her third complete-game shutout of the season. The Lancaster, Tenn., native struck out seven and did not walk a batter in the victory, which pushed her to 8-1 on the season.

The Bulldogs were blanked for the first time all afternoon in the first inning of game two, but responded with a four-spot in the second stanza. Roper and Nicholson began the inning with a single and a walk and, in a sacrifice attempt, Shawnee Kirk reached on an error which brought Roper home.

Freshman Katelyn Nowakowski made it 2-0 with an RBI double, and Montgomery added two more with a two-out single in the left-center field gap.

CU did not score again until the fifth, but added three more in the frame. Following a leadoff double from Broderick, Roper laced a ball that just stayed inside the third base line for an RBI double. Nicholson followed with her second home run of the day, a two run shot to left center.

Bluefield score its first run of the day in the bottom of the fifth. After starting pitcher Aline Uehara reached on a fielder’s choice and stole second, Ciera Conkle reached on an infield single. In a heads up play, Uehara advanced to third on contact and headed home on the throw to first.

In what would be the sixth and final inning, Kelley opened the frame with a single to right and Jamerson followed with a bunt single. After an out, Roper connected on her fourth home run of the season to give the Bulldogs a 10-1 advantage.

Senior Jessica Lozano (6-1) earned the victory in the circle for CU, pitching three innings and allowing just a pair of hits. The Wilmington, Calif., native struck out five and walked four. Maynard shut the door in the final three innings, allowing the unearned run while striking out three.

Cumberland travels to the University of Pikeville on Saturday for another Mid-South Conference twinbill. First pitch for game one is set for noon CT.