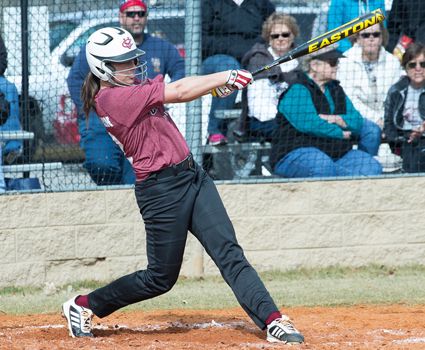 LEBANON, Tenn. – Cumberland was shutout in the opening game, 2-0, and saw its comeback efforts fall just short in game two, as the Bulldogs dropped a pair of Mid-South Conference games versus No. 11 Lindsey Wilson in softball action on Tuesday at the CU Softball Field.

Senior starting pitcher Courtney Maynard provided a valiant effort in game one, allowing just a pair of runs in a complete game, neither of which was earned. The Lancaster, Tenn., native struck out three and walked just one while scattering seven hits in the defeat.

The Bulldogs (17-5, 8-4 Mid-South) showed some early-inning jitters playing against their first ranked opponent all season, making three errors in the first two innings. After a leadoff single to begin the contest, an error brought Andrea Whelan home for the first run for the Blue Raiders.

Lindsey Wilson (20-2, 6-0) plated another run in the second on another two miscues. Back-to-back infield singles put two runners on and a throwing error advanced the lead runner to second. The next batter, Savannah Madison grounded into a fielder’s choice, however the throw was bobbled as Blue Raider third baseman Abbi Goedde scampered home.

Cumberland’s defense settled over the course of the game, as Maynard began to take control. CU’s bats, however, never woke up. The Bulldogs collected just five hits in the contest and saw a runner touch third just once.

The best opportunity for the Bulldogs came in the sixth inning, as Sydney Broderick and Emily Nicholson each singled to put a pair aboard with just one out. The threat ended when Shawnee Kirk grounded into a double play in which the senior appeared to be clearly safe at first base.

LWC starter, freshman Casey Bryan, sat CU down in order during the seventh to preserve her complete-game shutout and 10th victory of the season. Bryan put on a stellar performance, scattering five hits, striking out four and walking none.

The CU bats remained silent for the first three innings of game two, however, Bulldog starter Jessica Lozano managed to keep the Blue Raiders at bay during the frames. That changed for both squads in the fourth. LWC opened the scoring when starting pitcher Jordan Hood aided her own cause with a two-out, two-RBI home run over the left center field wall.

Cumberland responded immediately in the bottom of the frame, plating a pair of runs. Nicholson started the rally with a one-out single and Kirk reached on a fielder’s choice error putting a pair on. One batter later, junior Kaleigh Pearce lifted a two-RBI triple to right center, narrowly skating by the outstretched glove of the Lindsey Wilson center fielder.

It took the Blue Raiders two batters to retake the lead, as Madison Scott blasted a solo shot off the façade of Labry Hall in left field. Three batters later, a Bailey Mize single plated another run when the ball was bobbled in center field.

Lindsey Wilson added an insurance run in the sixth, as Scott brought home pinch runner Kendra Hyden on a sacrifice fly, pushing the score to 5-2 in favor of the Blue Raiders.

Junior Katelynn Stoll opened the seventh inning with a one-out single and freshman Kassydi Montgomery followed with a double off the left field fence. After a pitching change, Devon Jamerson kept the rally going with an RBI single up the middle.

Broderick knocked in Montgomery with an RBI groundout. With the tying run standing on third, pitcher Jasmine Matchen induced a groundout to complete the sweep and earn her fourth save of the season.

CU returns to action on Friday with another Mid-South Conference twinbill versus Georgetown College. First pitch is slated for 1 p.m. CT.