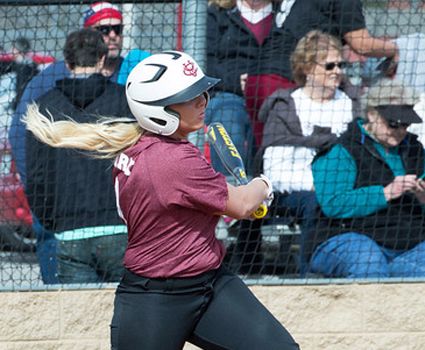 LEBANON, Tenn. – The Cumberland University softball team received a stellar pitching performance from senior Courtney Maynard, but struggled at the plate earning a doubleheader split versus the University of the Cumberlands on Saturday at the CU Softball Field.

Senior starter Maynard provided perhaps her best performance of the season in a 2-0 win. The Lancaster, Tenn., native allowed just three hits, did not walk a batter and struck out seven en route to her 10th victory of the season.

Maynard worked out of a jam in the second after allowing a pair of singles with one out. The right-hander got out number two on a sacrifice bunt from the Cumberlands’ (8-15, 5-5 Mid-South) Kayla Crisp and induced a groundout back to her to end the inning.

Over the next four innings, just two batters would reach base, as Kenly Lambert earned a leadoff single in the sixth and Bethany Davis was hit, but the two remained stranded on first and second.

Kirk delivered her first of three hits in the second inning, to give the Bulldogs (18-8, 9-7) a 1-0 lead. Senior Jessica Roper led off the inning with a single up the middle and moved to second when Emily Nicholson was hit by a pitch. Kirk followed with a double that skipped into the right field corner.

The senior outfielder came up big again in the fourth inning. Nicholson led off the frame with an infield single. After a sacrifice bunt from Sarah Murray moved Katelyn Nowakowski – pinch running for Nicholson – to second base. Kirk singled to left one batter later and the Bulldogs led 2-0.

It was a rocky top of the first inning for CU starter Caroline Curran in game two, as the senior surrendered three unearned runs on a pair of her own errors. Tori Poma began the game with a walk for the Patriots, but a fielder’s choice marked the first out of the inning.

Laurel Hopf followed with a single to put runners on first and second. The next batter, Ashleigh Hopf, grounded the first pitch she saw back to Curran, who, in an attempt to get the lead runner, sent the throw into left field, as Jill Bunnell scampered home.

Taryn Sigl pushed the score to 2-0 with an RBI single to plate Laurel Hopf, but was caught stealing during the next at-bat. The third and final run of the inning came on another Curran error on another ground ball. This time the ball skated into right field, as Ashleigh Hopf headed home.

The Cumberlands added one more run in the top of the fifth, as Maynard returned to the circle in relief. Lambert began the inning with a one-out single for UC and advanced to second on a groundout. Pona followed with a two-out single to right center to make it 4-0.

Cumberland cut the deficit in half in the sixth inning thanks to four hits, but ran out of the inning on a nice play from left fielder Kayla Crisp.
Jamerson led off the inning with a single and moved to second on a sacrifice bunt. Sydney Broderick and Jessica Roper followed with back-to-back RBI doubles to the right-center field gap. Emily Nicholson followed with a single to put runners on first and third.

The next batter, Kirk, flied out to shallow left field, a ball which was caught by Crisp. Roper took off from third and Crisp fired home, the ball beating the CU runner by a few steps to end the rally.

CU was shut down in the final inning by reliever Nichol Chesley, who earned her first save of the season. Starter Ashleigh Hopf moved to 3-2 on the year with the win.

Cumberland concludes an eight-game homestand on Tuesday versus Georgia Gwinnett. The Bulldogs swept the Grizzlies on Feb. 24 earlier in the season. First pitch is slated for 2 p.m.