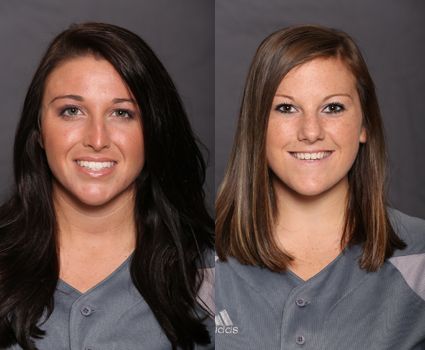 LEBANON, Tenn. – Kristen Abell tossed a complete game and Kassydi Montgomery belted a two-run homer and drove in the winning run with a double in the eighth inning, as Cumberland split a doubleheader with Union University on a cold and wet Wednesday at the CU Softball Field.

The Bulldogs (1-1) dropped the first game, 10-2, with three errors leading to five unearned runs by Union (8-6). Abell worked around an error and stranded the bases loaded in the fifth and sixth innings to pick up the victory.

Kaleigh Pearce hit a line drive solo homer in the second inning and Montgomery’s two-run home run gave Cumberland a 3-2 edge in the third. The Bulldogs held onto the one-run lead until the seventh when Alex Williams dumped a two-out single into short rightfield, plating Summer Cross, who had singled with one out, and sending the contest to extra innings.

The eighth inning brought the international tiebreaker rule and Abell was able to strand Carter Mansolino at third base in the top of the inning.

In the bottom half Katelyn Nowakowski started at second and took third on a wild pitch. Vienna Benavides fouled out and Katelynn Stoll struck out before Montgomery’s shot to the wall that hit of the glove of Cross and fell to the turf, allowing the winning run to cross the plate for the win.

Abell (1-0) gave up three runs on seven hits with three walks and one strikeout. Her only punchout of the game came with the bases loaded and two outs in the seventh, a swinging third strike of Carlie Brickley to end the inning.

Benavides singled twice for the Bulldogs, who had just six hits and stranded only one runner in the victory.

Williams belted a three-run homer in the first inning of the opener and Union plated five runs, two earned, in the fifth inning thanks to an error and a passed ball to break open another 3-2 contest. Whitney Christian collected three hits, drove in a run and scored another in the contest for Union and Madison Tennyson was 2-for-3 with two runs scored as well.

Robey got the win in relief in that contest as well, giving up one hit with six strikeouts in 4.1 innings.

Union struck quickly in the first game, with Tennyson drawing a leadoff walk and Cross reaching when Giselle Delgado dropped the throw to first on a sacrifice bunt. Two batters later Williams’ line drive just cleared the centerfield wall for a 3-0 advantage for the visitors.

The Bulldogs cut into the deficit in the third when Stoll was hit with one out and Nowakowski dumped a single into short center. With two outs Madison Gonzalez drilled an 0-2 pitch into the gap in leftcenter, plating both runners to cut the Union lead to 3-2.

The flood gates opened in the fifth when Reagan Schrader singled to start the frame and Williams reached on an error by Montgomery. The runners went to second and third on Mansolino’s sac bunt and Schrader scored on a wild pitch.

Christian’s single between short and third plated Williams and Hailey Cummings followed with a single to left. Annette Castaldo then singled to rightcenter, scoring a run, and Nowakowski’s throw to the plate allowed Castaldo to take second on the play.

Emily Bennett’s grounder through the middle pushed across another run before Tennyson struck out but reached on a passed ball. Castaldo also scored on the passed ball for an 8-2 Union lead.

Union plated two more runs in the seventh, starting when Castaldo reached on a throwing error by Pearce. She went to second on a wild pitch and Tennyson singled with one put, putting runners on the corners. Cross’ groundout plated a run and Schrader drove home the final run of the game with a two-out single to center.

Union jumped on top again in the second game when Schrader hit a solo homer in the first inning, but Pearce’s solo shot to center tied the contest in the second.

Union reclaimed the lead with a run in the third thanks to back-to-back two-out doubles from Tennyson and Cross, but Benavides singled off the glove of Brickley in leftfield to start the bottom half and Montgomery drilled a 3-0 pitch well over the wall in rightcenter with one out for a 3-2 CU advantage.

Union loaded the bases in the fifth on two-out singles by Brickley and Tennyson and a walk to Cross, but freshman Brittany Rasmussen made a nice sliding catch on a line drive by Schrader to end the threat.

In the sixth Mansolino reached on an error and walks to Christian and Cummings loaded the bases again before Brickley’s strikeout.

Cumberland has changed its schedule for the coming weekend and will take on Taylor University in a single game Friday at Noon. The two teams will meet again Saturday at 10:30 a.m. followed by Taylor and Tennessee Wesleyan at 12:30 p.m. and the Bulldogs and Wesleyan at 2:30 p.m.