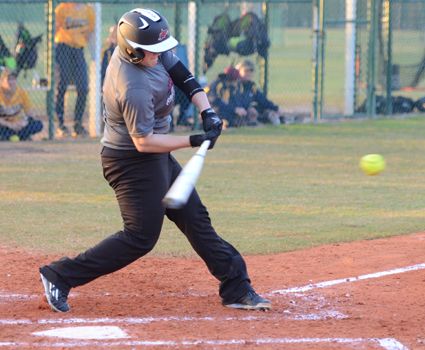 Warner scored in every inning in the opener to take the 8-3 victory. Delgado posted three of the team’s seven hits, scored twice and drove in a run, but the Royals banged around all three Cumberland hurlers used in the game.

Cumberland led the second game, 6-1, heading to the sixth inning before Ave Maria knotted the contest. The teams traded two runs apiece in the eighth inning before the Gyrenes exploded for six more runs in the ninth, helped along by a pair of Phoenix errors in the outfield.

Benavides and Delgado both collected three hits and Montgomery drove in four runs, including a two-run homer in the first inning. Nicole Pratt (0-1) started the game and then tossed the final 1.2 innings, allowing four runs, one earned, on two hits. She walked five and struck out three to get the loss.

Tori Johnson and Caylin Delones both singled to start the bottom of the first for Warner and moved to second and third on a sacrifice bunt by Jessica Adams. Nicole Comstock’s infield single plated a run, but Newsome worked out of the jam without any further damage.

In the second Kaitlyn Ficarrotta doubled to leadoff and Chelsie Valentine walked before a sac bunt by Kori Peterson. Johnson’s groundout plated a run and Delones followed with an RBI single for a 3-0 Warner advantage.

Comstock and Brittany Winget both doubled in the third for another run for the Royals.

In the fourth Peterson singled and Johnson walked before an RBI single to leftcenter by Adams extended the lead to 5-0.

Cumberland got on the board in the fifth with a solo homer to leftcenter from Delgado, but Warner answered in the bottom of the inning when Jessica Davis doubled and scored on a pair of wild pitches.

The Phoenix added another run in the sixth when Tessa Tomaselli walked to leadoff and Montgomery singled before an RBI double by Jocelyn Hernandez, but CU stranded the two runners in scoring position and trailed, 6-2.

The Royals added two more runs in the bottom of the inning, starting with Peterson reaching on an error. Delones walked with one out and Adams doubled down the leftfield line, plating a run. With two outs Davis walked and Winget followed with an RBI single to left.

Delgado collected the last of her three hits in the game to leadoff the seventh and scored on Gianna Abatti’s infield single, but that was all for Cumberland in the contest.

Benavides started the bottom of the first against Ave Maria with a single and stolen base. She moved to third on Imani Torregano’s groundout and scored on Montgomery’s two-run homer to rightcenter for an early CU lead.

In the second Madison Gonzalez singled down the rightfield line and Delgado followed with a bunt single. Maryah Cohen reached on an error, loading the bases, and Brianna Gregory’s infield single plated a run.

The Gyrenes got on the board in the third when Jessica Chavez drew a leadoff walk and Marinna Shadley doubled down the leftfield line. Chavez came across on a passed ball, cutting the Cumberland advantage to 3-1.

Tomaselli’s solo homer to center in the bottom of the inning pushed the lead back to three.

In the fourth Benavides reached on a two-out error and Torregano singled up the middle before a two-run double down the leftfield line from Montgomery, extending the advantage to 6-1.

Ave Maria batted around in the sixth, collecting three hits and tying the game.

Marissa Conde was hit with one out and Michella Davis doubled before a two-run double from Brittany Blocker. Chavez then singled up the middle, putting runners on the corners, and Blocker scored on a wild pitch.

Crescencia Del Pino was also hit and both runners moved up on a passed ball. Emily Blackmore’s groundout plated a run and Del Pino later scored on a wild pitch, knotting the game at six.

The Gyrenes took their first lead of the contest in the eighth, with the international tiebreaker rule starting in that inning.

Chavez struck out and Shadley grounded out before Abell ran into trouble, walking Blackmore and Rachel Curtiss. Taylor Sterling then scored a pair of runs with a single down the leftfield line for an 8-6 Ave Maria advantage.

In the bottom of the eighth Delgado walked and Hernandez scored all the way from second on a wild pitch. Cohen’s single to the left side plated Delgado with the tying run and Cumberland loaded the bases with a single from Benavides and a walk to Torregano, but Montgomery grounded out to end the inning.

Ave Maria broke loose for six runs in the ninth, all unearned, with Davis doubling home Deanna Stirtzinger with one out. Sullivan singled up the middle and Chavez walked, loading the bases, before a two-run single to right by Shadley.

Torregano misplayed the ball in the outfield, allowing the bases to clear, and another run came across later in the inning on a second error by Torregano in leftfield. Conde was hit with the bases loaded, forcing in the final run of the game for the Gyrenes.

Cumberland scored three runs in the bottom of the inning, but wasn’t able to get the tying run to the plate.

Tomaselli singled up the middle and Hernandez’s single to left plated a run before a passed ball put runners on second and third. Delgado plated one run with a single through the left side and Cohen drove home another with a groundout, but pinch-hitter Abatti struck out to end the contest.