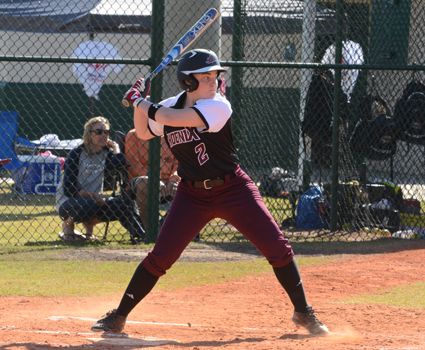 LEBANON, Tenn. – Imani Torregano and Joselyn Hernandez both collected two hits in the opener but Cumberland only two hits in the second game, dropping an 8-1 decision to 16th-ranked Southeastern University and losing 5-0 to No. 14 USC-Beaufort on Saturday in Plant City, Fla.

Cumberland trailed just 2-1 before Southeastern plated three runs in the fourth and two more in the fifth to pull away for an 8-1 victory. Nicole Pratt (0-2) took the loss, allowing three runs on three hits with four walks in three innings.

Hernandez scored the club’s only run in the second inning on a throwing error by SEU catcher Brandee Pietrzak.

Ashlie Layman tossed a two-hit shutout for USCB in the second contest, walking one and striking out eight. The Sand Sharks scored three times in the bottom of the sixth to break open a tight game, two of those runs unearned after a pair of errors by the Phoenix (0-4).

Cumberland managed only five baserunners in the contest and stranded four of them in scoring position. Kristen Abell (0-1) suffered the loss, giving up one run on five hits with one walk in four innings.

Taylor Stoltz led off the game for Southeastern with a walk and after a fielder’s choice, Bri Girardin stole second. Cat Maldonado then doubled, plating Girardin for an early 1-0 lead for the Fire.

Cumberland tied the game in the second when Hernandez led off with a single down the rightfield line and went to second on a groundout by Madison Gonzalez. Hernandez scored on a throwing error by Pietrzak, knotting the game at one.

Girardin started the SEU third with a bunt single and Maldonado followed with a double before a walk to Anna Martin loaded the bases. Girardin scored on a wild pitch and s acrifice fly by Natalie Hughes made it 3-1 for the Fire.

In the fourth Quynn Reddick and Stoltz both singled with one out and moved up on a passed ball. Pinch-hitter Alexandra Millett’s single up the middle scored two runs and Maldonado reached on an error. Both runners stole and one came across on a groundout by Martin.

Annie Weaver walked to leadoff the Southeastern fifth inning and with two outs, Stoltz reached on an error. Both runners stole and Girardin plated Weaver and Stoltz with a single up the middle.

Abell tossed three scoreless innings against USCB, working around a walk and two singles, before a leadoff walk to Alexa Moore and a single from Bailey Craven opened the door for the Sand Sharks to get on the board. Madison Ferguson’s infield single loaded the bases and Whitley Martin’s single to left plated Moore with the first run of the game.

Marissa Becker greeted Pratt to start the fifth with a triple down the rightfield line and two batters later, Taylor Boyett’s bloop behind the pitcher’s circle put USCB ahead, 2-0.

Craven walked to leadoff the sixth and Martin singled with one out and two errors on the same play by CU third baseman Kassydi Montgomery allowed one run to score. Becker then singled down the rightfield line, plating a run, and Boyett’s sacrifice fly scored the final run of the game.