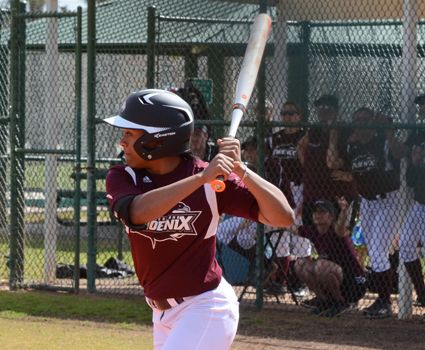 LEBANON, Tenn. – Imani Torregano collected three hits, including the game-winner, and Madison Gonzalez drove in a pair of runs in Cumberland’s 4-3 victory over Keiser University in softball action Sunday morning in Plant City, Fla. The Phoenix dropped their second game of the day, 2-0, to Ave Maria University.

Cumberland scored twice in the first on Gonzalez’s two-run single up the middle and a two-out infield single to the right side by Vienna Benavides in the fifth gave CU a 3-2 edge, but the Seahawks plated two runs in the fifth and one in the sixth to knot the game at three.

Gianna Abatti led off the Phoenix seventh with a double to leftcenter and moved to third on Brianna Gregory’s sacrifice bunt. Benavides grounded out, but Torregano delivered the walk-off single to the left side for a 4-3 victory.

Leah Newsome tossed five innings in the circle for Cumberland, allowing three runs on seven hits with one walk. Crystal Bryant worked two hitless innings for the win, striking out one.

Gonzalez and Benavides both finished with two hits in the win.

Ave Maria scored twice in the fifth and Cumberland stranded the bases loaded in the second and two runners in the seventh in a 2-0 loss to the Gyrenes.

Brooke Pierron drove home a run with a double and Pierron came across on a wild pitch for the only two runs of the contest. Ave Maria had at least one baserunner in six of the seven innings, but Bryant worked in-and-out of trouble with six strong innings, giving up five hits with no walks and six strikeouts.

Gregory posted two of Cumberland’s four hits in the contest against Gyrenes hurler Sadie Mosher, who struck out 10 and walked one in the complete game. Abatti walked with two outs in the bottom of the seventh and Gregory reached on an infield single, with the runners moving to second and third on a wild throw by the pitcher, but Benavides struck out to end the game with the tying runs in scoring position.

Benavides started the first game with a bunt single and moved to second on an errant throw by Keiser catcher Jaryaca Rosario. Torregano also reached on a bunt single, putting runners on the corners, before an infield single by Tessa Tomaselli loaded the bases. Joselyn Hernandez bounced into a 1-2-3 doubleplay, but Gonzalez followed with a two-run single to center for an early lead.

Newsome retired 12 of the first 14 batters of the game, allowing a pair of doubles before Keiser broke through in the fifth.

Taylor Beckman and Avery Miller both singled to leadoff the inning before a fielder’s choice by Nicole Grannito. Miller was out on the play at second, but the relay throw from Benavides to first was wild, allowing Beckman to score on the play.

Shanah Thomas then singled for the Seahawks and Heather Shapiro grounded to third. Kassydi Montgomery got the force out, but her throw to first was wild and Thomas later scored on a passed ball, tying the contest at two.

Cumberland got a run back in the bottom of the inning after a leadoff walk by Maryah Cohen and a sac bunt from Abatti. Cohen moved to third on a passed ball and scored on a Benavides infield single.

Keiser came right back in the sixth, though, with a solo homer from Cassidy Miller tying the game at three, setting up Torregano’s game-winning single in the bottom of the seventh.

Cumberland’s best chance to score against Ave Maria came in the second inning when Cohen was hit with two outs and Abatti reached on an error. Gregory then singled to the right side, loading the bases, but Benavides struck out to end the inning.

Mosher retired 14 of the next 15 batters before the walk to Abatti and infield single by Gregory in the seventh.

Cumberland opens the home schedule this Friday with a 1 p.m. doubleheader against Taylor University and hosts Freed-Hardeman for a twinbill on Monday, February 29.