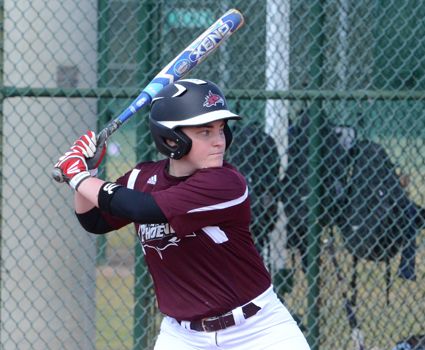 LEBANON, Tenn. – Madison Gonzalez posted four hits with two RBIs and two runs scored and Crystal Bryant drove in a pair of runs and collected two hits, but Freed-Hardeman used three big innings to sweep a doubleheader from Cumberland, 9-3 and 9-2, in softball action Monday at the CU Softball Field.

Freed-Hardeman (3-3) scored five times in the third inning and four more runs in the seventh in the opening game and recorded six runs in the second inning of the second contest en route to the two victories. The Lions pounded out 25 hits and took advantage of five Phoenix errors as well.

Bryant drove in Gonzalez and Jocelyn Hernandez with a two-run double in the second inning of the opener, giving CU a 2-0 edge, but the Lions answered with five runs on five hits in the third, with only one hit reaching the outfield grass. Katie Sholl’s grounder up the middle plated two runs in the frame.

Leah Newsome (0-2) suffered the loss for Cumberland (1-9), allowing six earned runs on 11 hits in seven innings. The righthander walked three and struck out two, but pitched much better than the stats would indicate, giving up just three hard-hit balls in the entire game.

Freed-Hardeman’s Makenzie Prince (2-2) picked up the win, allowing three runs on eight hits with one walk and three strikeouts.

Caitlyn Carter went 3-for-4 with two runs scored and Allie Carpenter posted three hits and two RBIs for the Lions.

Prince registered three doubles with two RBIs and two runs scored in the second game, backing up a complete game from Mallory Spurlock (1-1), who scattered nine hits and gave up one earned run with three walks and five strikeouts.

FHU plated six runs on six hits and the aid of one error in the second inning, giving Spurlock more than enough run support. Sholl collected three hits and scored twice in the second game and Jessica Weeks, Jenna Graham and Spurlock each registered two hits.

Gonzalez hammered a solo over the centerfield wall in the fourth inning for her first home run of the season, with the ball above the flag pole when it left the park. She also singled in the second and doubled home the club’s final run in the seventh.

Cumberland was just 1-for-12 with runners in scoring position in the game, stranding 10 total baserunners against Spurlock. Hernandez collected two hits for CU as well.

Cumberland started quickly in the opener, with Gonzalez and Hernandez both singling to start the second inning. They went to third on Gianna Abatti’s sacrifice bunt and scored on Bryant’s first hit of the season, a two-run double to leftcenter.

The Lions answered in the third, starting with a one-out walk to Rachael Dodd. Weeks and Carter both beat out infield singles to short, loading the bases, but Prince struck out. Singles from Carpenter and Savannah Decker each plated a run and Sholl’s grounder through the middle scored two. Graham then grounded off the glove of third baseman Kassydi Montgomery, allowing the final run of the inning to come across.

The Phoenix missed chances to cut into the deficit in their half of the third and also the fourth, stranding Imani Torregano at third and Abatti at second before breaking through in the fifth.

Vienna Benavides beat out a bunt single to leadoff and went to second on a wild pitch. With two outs Montgomery singled sharply to left, scoring Benavides and cutting the FHU lead to 5-3.

Prince retired seven of the final eight CU batters of the game after the Montgome4ry single and the Lions gave her four more runs to work with in the seventh.

Carter started the inning with a triple to rightcenter, motoring around the bases, and Prince walked before an RBI single to center by Carpenter. A sacrifice bunt from Decker pushed the runners to second and third and Kaylyn Graham’s single to center scored Prince.

Another run came across on a passed ball and Jordan Burton’s RBI single to right plated the final run of the contest.

Things unraveled quickly for Cumberland in the second game, with Freed-Hardeman sending 11 batters to the plate in the second inning.

Decker walked and Weeks singled to the right side before the first of Prince’s doubles to leftcenter. Decker scored easily but Weeks found a sniper rounding third, falling halfway down the line. The throw in from Tessa Tomaselli went to third and Weeks broke for the plate, sliding around the tag of the catcher Bryant for the second run on the play.

Jenna Graham drove in Prince with a single to right and Carter and Sholl both followed with singles to load the bases, with Sholl reaching on a bunt single. Carpenter walked, forcing in a run, and Spurlock followed with an RBI single to left. Decker’s groundout plated the last run of the inning.

Cumberland stranded four runners in the first three innings, with Benavides walking to leadoff the first and Gonzalez singling to start the second. Torregano walked and Tomaselli was hit with two outs in the third, but none of those runners made it past second base.

Gonzalez blasted her home run to begin the fourth inning and Benavides and Torregano both reached on singles to start the fifth, but again they did not get further than second base.

Freed-Hardeman added two more runs in the fifth when Weeks singled through the left side and moved to third on Prince’s double to center, her third two-bagger of the game. Jenna Graham’s single up the middle plated a run and Carter’s groundout to short scored another.

Hernandez and Bryant both singled to leadoff the sixth as well, but Abatti’s line drive to right turned into a doubleplay and even after Maryah Cohen’s walk, Benavides lined out to end the inning.

Sholl bunted her way on in the seventh for FHU and Malorie Prince followed with an RBI double down the leftfield line for the final run of the game for the Lions.

In the bottom of the seventh Montgomery singled to start the frame and pinch-runner Alisa Walker took second on a passed ball. Gonzalez then doubled down the rightfield line to score the final run.

Cumberland does not play again until March 10 at 14th-ranked USC-Beaufort. The Phoenix host Maryville College on Wednesday, March 16 at Noon.