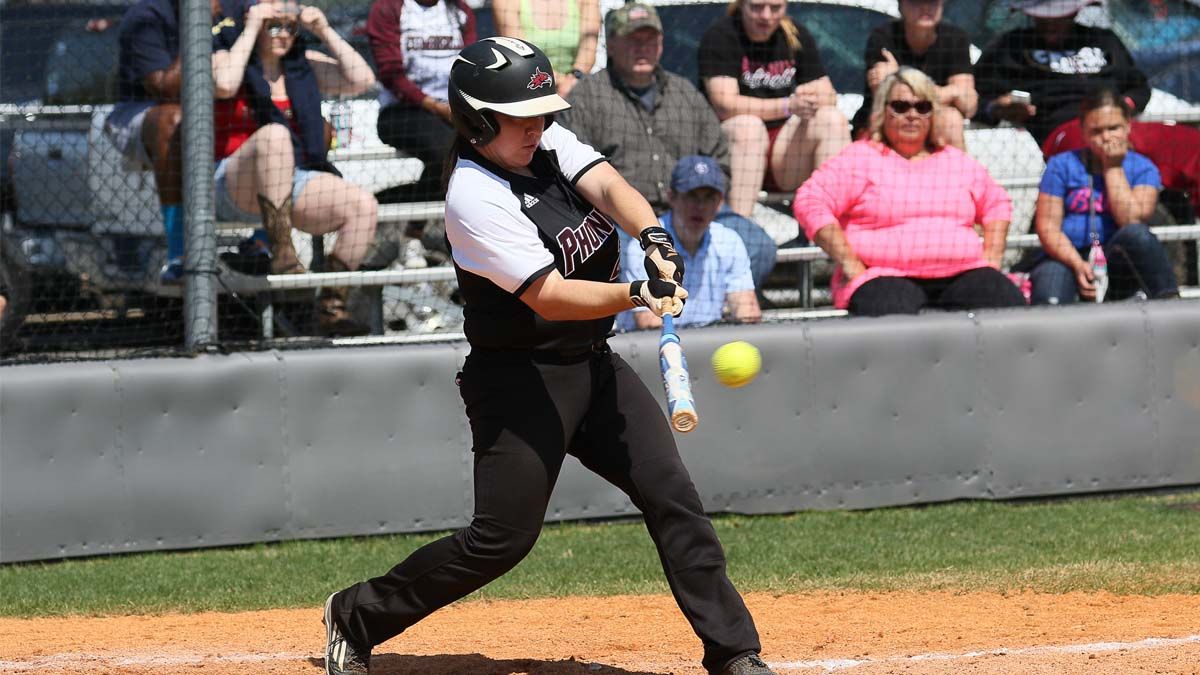 PLANT CITY, Fla. – Cumberland collected two wins in their first two games of the day with a 5-4 edge over Ave Maria University and a 14-12 victory past Warner University but dropped a 19-4 decision to Keiser University in their final game on Saturday, in Plant City, Fla.

The Phoenix scored two runs in the second inning to giving them an early lead as Sara Jordan allowed no runs in the first inning and Cumberland came out strong in the second, with a single from Jocelyn Hernandez to center field.

Kassydi Montgomery’s double to left center plated Hernandez for the first run of the game. Ave Maria’s Mosher threw two wild pitches in a row to advance Montgomery to third and then home to put CU up 2-0. Woodring flied out to Rachel Curtiss for the final out of the inning.

AMU got on base in the bottom of the second as Deanna Stirtzinger was hit by a pitch and Paige Aldred’s base hit advanced Stirtzinger to second. Jordan stuck out the Gyrenes’ next batter, Danielle Garcia but Stirtzinger and Aldred advanced bases on a wild pitch.

Gyrene’s Mckayla Jeter’s hit popped up to Jordan to claim the second out of the inning, but Stirzinger scored on another wild pitch. Pookie Del Pino’s pop up to Kayala Hoppenjans secured the final out.

Imani Torregano bunted at her next at bat, and Tyra Graham’s bunt moved Torregano to second as Graham made it to first on the play. Tessa Tomaselli’s sacrificed bunt grounded out to Garcia advancing Torregano and Graham.

Hernandez reached first on a fielder’s choice, as Hoppenjans was thrown out at second but Torregano came home and Graham moved to third base before Kassydi Montgomery flied out to Stirtzinger.

In the bottom of the fourth, Stirzinger’s single was followed by a base hit by Aldred. Jeter’s RBI advanced Aldred to third and Stirzinger scored on an error by Hernandez, before Del Pino flied out to Torregano to end the inning.

Each team scored their final run in the sixth inning while Courtney Miles was hit by a pitch and Woodring’s single advanced her to second. Torregano’s sacrificed bunt moved both Miles and Woodring one base, before Tomaselli’s double two RBI gave the Phoenix a 5-3 advantage.

Gyrenes’ Del Pino singled to center field to bring home Garcia for their final run of the game.

Tomaselli recorded her first homerun of the season in the first inning against Warner University, helping the Phoenix take an early lead, 1-0.

Shae Dunn walked in the second inning and Miles’ homer put CU ahead by 3. Woodring doubled to left field, and moved to third base off a sacrifice bunt by Torregano. Graham’s base hit plated Woodring for the final run of the inning.

Warner University’s Madison Mihok singled and Torey Scott walked advancing Mihok to second. Both players then advanced on a wild pitch before Caylin Delones’ ground out to the first baseman, but plated Mihok on the play. Tori Johnson flied out to the center field, and Scott came home for their final run of the inning pulling them within two, 4-2.

The Royals scored three runs in the top of the fourth to put them ahead 5-4, but Cumberland responded with Mile’s second homer of the day. Woodring doubled down the left line, and Torregano sacrifice bunt moved Woodring to third. Grahams two base hit scored in Woodring and Tomaselli singled to plate Graham.

Hernandez’ single advanced Tomaselli to second, and Montgomery’s sacrifice fly advanced both of them one base. Hernandez took third on a pass ball and Tomaselli scored on the play. Hoppenjans single RBI brought in Hernandez, giving CU a 9-5 advantage.

Cumberland scored three runs in the fifth inning, as Miles walked and Woodring got out on the play, moving Miles to second. Torregano’s single advanced Miles, and Brittany Rasmussen’s single filled the bases for the Phoenix.

Warner University pulled within three during the sixth inning, and Dunn plated the final run for the squad.

CU tried to find their way in the bottom of the fifth scoring their only runs of the game. With bases loaded Torregano singled scoring in Hoppenjans. Woodring’s base hit plated Shea Smith and Tomaselli’s double brought in Torregano and Dunn.

The Seahawks closed out the final inning scoring eight runs to lead them to a 19-4 victory.

Cumberland is back in action for their final day in Plant City, Fla., to take on Southeastern University at 11:30 a.m. and Keiser University at 2 p.m.