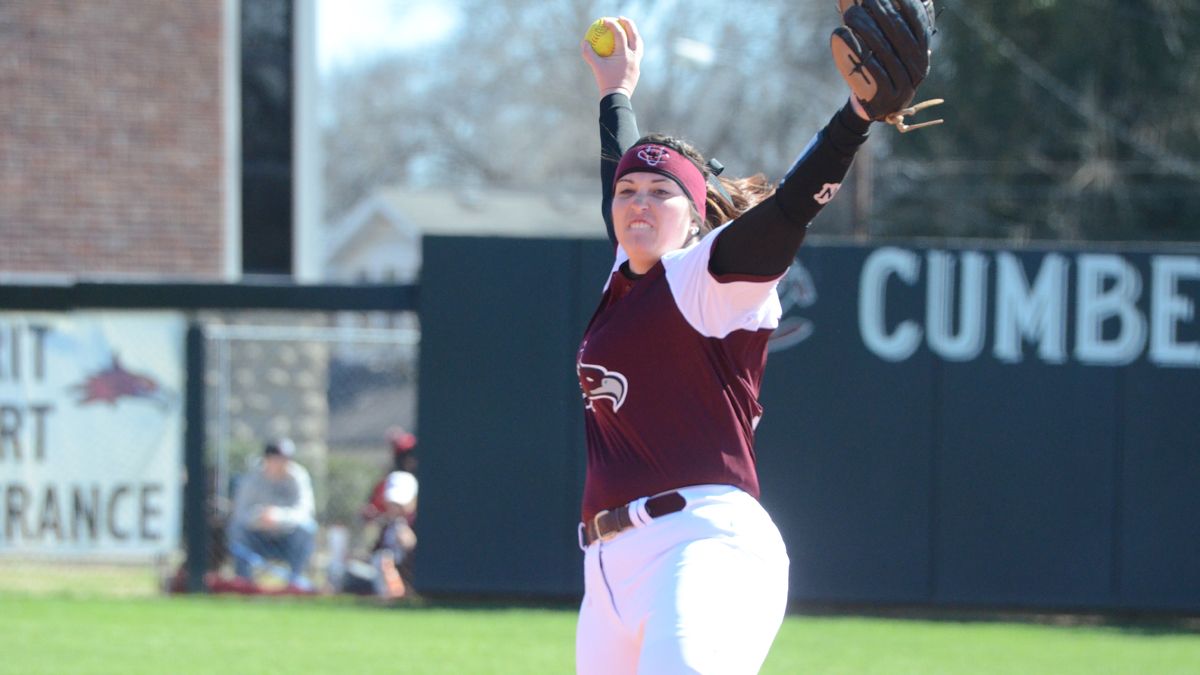 LEBANON, Tenn. – Kaitlin Kralj struck out 10 in a complete game in the opener, Tyra Graham collected five hits and five RBIs in the two games and Shae Dunn was 3-for-4 with two RBIs in the second contest, as Cumberland swept a doubleheader from Midway University, 3-0 and 9-5, here Sunday at the CU Softball Field.

Graham led off the bottom of the first with a solo homer and added an RBI double in the fourth in the first game, providing all of the offense that Kralj (3-0) would need. The righthander stranded 10 baserunners in the contest, including two each in the fifth and seventh innings and the bases loaded in the sixth.

Cumberland’s other run in the contest scored on a two-out single in the first by Courtney Miles, who also homered in the second contest.

Tiffany Wickline (0-2) suffered the loss for the Eagles, giving up three runs, one earned, on seven hits in six innings.

The Phoenix scored three times in the first inning of the second game, the first of three innings of three runs in the victory. Tessa Tomaselli’s two-out single to center plated Graham and after Miles reached on an error, Dunn’s two-RBI double to rightcenter gave CU a 3-0 lead.

The Eagles knotted the game in the third inning on a three-run homer from Katelynn Mogelberg-Kauffman, a deep shot to left that cleared both fences and the air conditioning unit in front of Labry Hall.

Midway took the lead in the fourth with two more runs, one on a wild pitch and another on a throwing error by Cumberland.

The Phoenix answered in the bottom of the inning, though, to remain the lead. Brianna Gregory’s RBI groundout made it a one-run game before a double to leftcenter from Graham tied the contest. Taylor Woodring then singled up the middle, plating Graham for a 6-5 edge.

Cumberland added insurance runs in the fifth, starting with the solo homer from Miles. Graham’s two-run single later in the frame drove home pinch-runner Gianna Abatti and Kayala Hoppenjans with the final two runs of the contest.

Cumberland hosts Tennessee Wesleyan on Tuesday and Bethel University on Wednesday before heading to Nashville to take on Trevecca University on Thursday.

Graham’s homer started the game for the Phoenix and Jocelyn Hernandez reached on an error with one out before a Tomaselli walk. Miles then delivered a single to rightcenter for a 2-0 CU lead after an inning.

Wickline kept Cumberland at bay, allowing just five baserunners the rest of the game, but another error opened the door for the third run.

With two outs in the fourth Brianna Gregory’s slow-roller to the left side was fielded by Mogelberg-Kauffman at third, but no one was covering first base. The throw sailed past the bag, banged off the wall and back into play down the rightfield line. Gregory went all the way to third and scored on Graham’s double high off the centerfield wall for a 3-0 advantage.

In the fifth Mogelberg-Kauffman was hit to leadoff for the Eagles and Lynsie Clark singled with one out, but Kralj struck out Carly Benz and Reilly Anderson to end the threat.

Kelsey Gravens doubled with one out in the Midway sixth and Wickline singled, but Gravens was thrown out trying to score on a ground ball to second by Kolbi Mitchell. Mogelberg-Kauffman was hit again before Kendall Horn ended the inning with a groundout.

Anderson and Gabby Bruner both singled with two outs for the Eagles in the seventh, but Gravens fouled out to end the contest.

The second game started quickly for Cumberland, with Graham singling and taking second on Woodring’s bunt. Tomaselli singled with two outs before the error and two-run double by Dunn made it 3-0 for the home team.

Gravens doubled and Wickline walked with one out in the third for Midway before the three-run blast by Mogelberg-Kauffman tied the game at three.

In the fourth Clark led off with a single and Bruner doubled before a wild pitch plated a run. Anderson’s ground ball to second did not score Bruner, but an errant throw allowed her to come across for a 5-3 lead.

Dunn led off with a double and Kassydi Montgomery walked in the fifth for CU, with a wild pitch moving the runners to second and third. Gregory’s groundout scored Dunn and Abatti came across on Graham’s two-out double to center. Woodring then delivered the go-ahead single for a 6-5 edge.

In the fifth Miles led off with a solo shot to dead centerfield, her fourth of the year, and Dunn followed with a single. After a groundout Hoppenjans doubled to leftcenter and pinch-hitter Hollie Kepley walked, loading the bases.

Graham delivered a two-run single down the leftfield line to score the final two runs for CU.