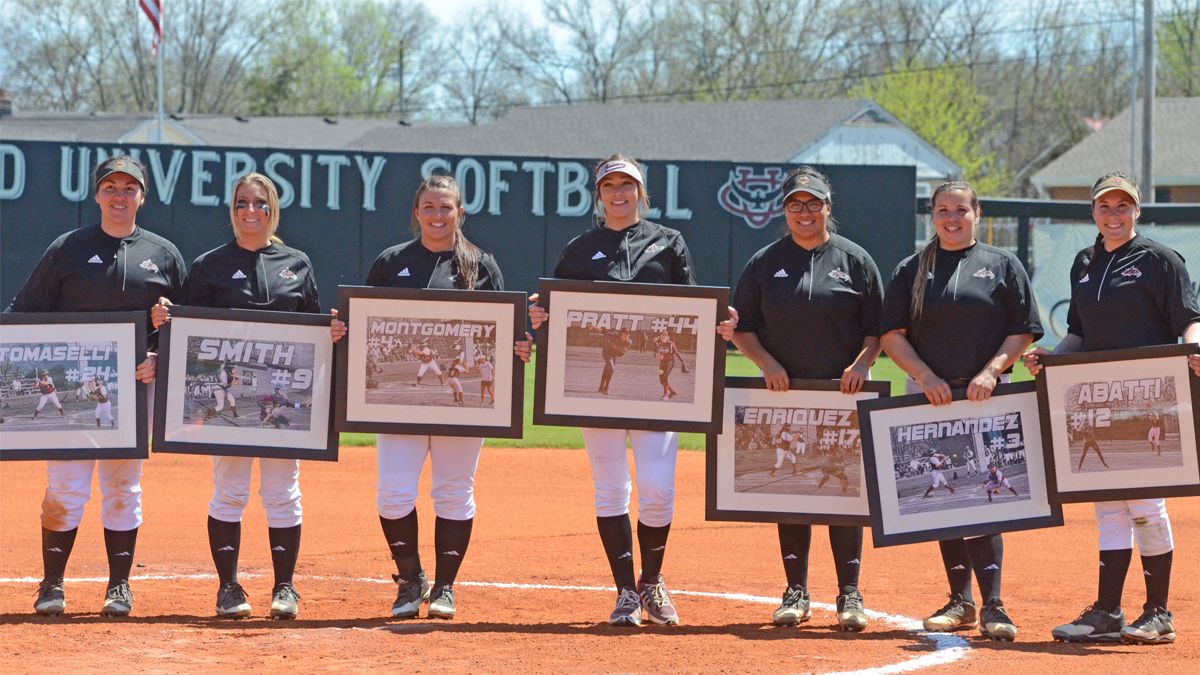 LEBANON, Tenn. – The University of Pikeville’s Alexandra Quill pitched a complete game allowing just six hits and no runs in a 4-0 victory and the Bears plated four runs in the fourth inning to win the second game 4-2 on senior day at the CU Softball Field on Saturday.

Jillian Bohnert’s RBI single to right field brought across Hannah Absher in the first and Logan Cline singled up the middle in the third inning to plate Jordan Gentry. In the top of the fifth the Bears’ Floyd ripped a single through the left side and Ashley Goines scored on the play. A double by Goines in the sixth inning brought home Gentry for the final run of the game, 4-0.

Alexandra Quill (4-8) pitched a complete game allowing just six hits and no runs for the Bears, picking up her fourth win of the season.

For the Phoenix Tessa Tomaselli went 2-for-3 at the plate as Tyra Graham, Courtney Miles, Shae Dunn and Jocelyn Hernandez each collected one hit apiece.

Kaitlin Kralj (4-8) took the loss, allowing four runs, two earned and 11 hits in five plus innings of work while Alexa Snyder came in to relief for the remainder of the game, allowing just one hit, no runs and striking out one batter.

Graham’s solo homer in the third inning gave Cumberland their only lead in the second game, putting them ahead 1-0.

Pikeville plated four runs in the fourth inning with errors playing in their favor. Gentry singled to and advanced to second on an error, as Lee Griffin and Floyd both scored, taking the lead, 2-1. A sac fly to the second baseman scored in Absher, but a fielding error by the catcher allowed Gentry to score for the 4-1 advantage.

Cumberland scored just one final run in the bottom of the seventh, as Taylor Woodring single bringing Tomaselli home.

Hannah Skaggs (3-4) got the win, allowing two runs on four hits and striking out five in all seven innings of work.

The Phoenix travel to Columbia, Ky., on Monday, April 10 to take on host Lindsey Wilson for a doubleheader beginning at 3 pm.

An early error on the Phoenix helped Pikeville’s Absher reach first to start off the lineup in the first inning. Gentry struck out swinging, and Absher stole second on the play to get into scoring position. A RBI single to right field scored in Absher for the first run of the game, 1-0.

In the top of the third Gentry reached on an error and Bohnert singled through the left side advancing Gentry to second. Raymond’s 2-2 sac bunt moved both runners to second and third. A single up the middle by Cline scored in Gentry for the unearned run.

Goines doubled to left field in the fifth inning and a sac bunt by Molden advanced Goines to third. Goines came home on a Floyd single through the left side with two outs in the inning for the 3-0 advantage.

Another single by Gentry started off the sixth inning and Raymond grounded out to the second baseman but Gentry advanced on the play. Cline’s double down the right field line was all Pikeville needed to score in Gentry and secure the 4-0 victory.

Graham’s solo home run to left field put the Phoenix on the board early in the first but Cumberland could not seem to find their way, collecting just four hits total in the second game.

The Bears responded in the fourth, with a Floyd single to left field and a bunt single by Lee Griffin who advanced to second on an error and moved Floyd to third. Absher reached first on a bunt single and Gentry singled and advanced on the error, and both Griffin and Floyd scored.

Bohnert sac fly to the second baseman plated Absher but an error on the catcher allowed Gentry to score as well for the 4-2 lead.

CU tried to come back late in the seventh, with a double to left center by Tomaselli with one out in the inning. Woodring singled and advanced to second on a fielding error, allowing Tomaselli to score on the play to pull the Phoenix within two, 4-2.