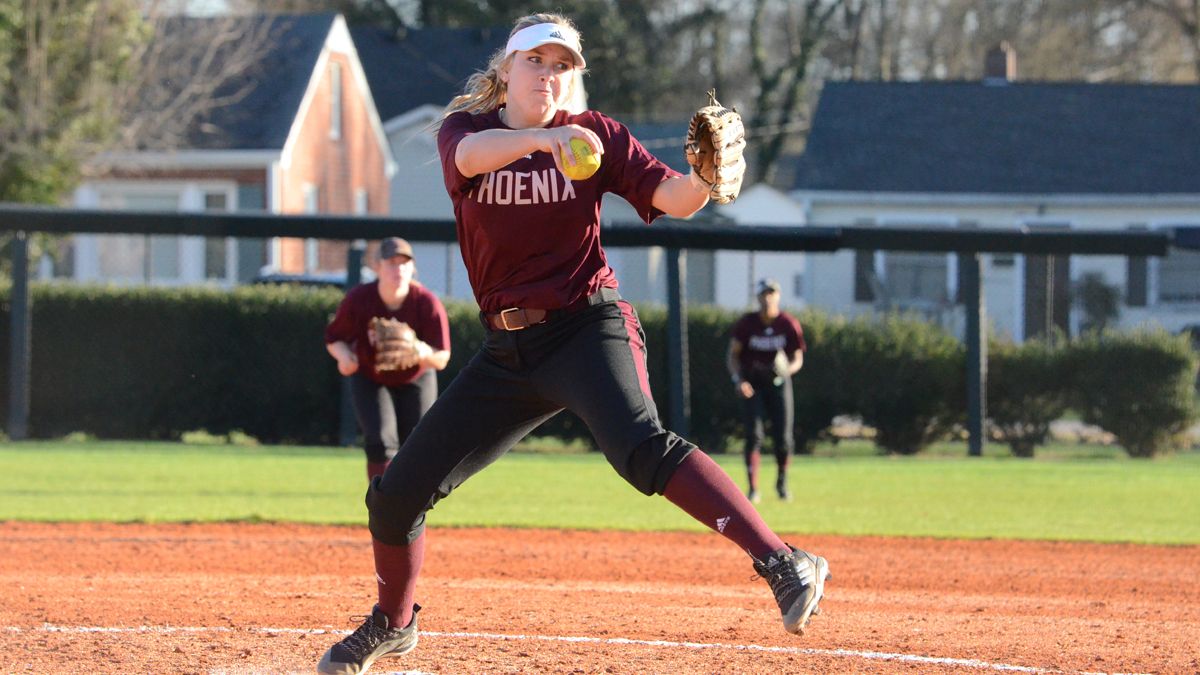 LEBANON, Tenn. – Alexis Smith hit three homers and drove in seven runs in the opener and Morgan Gailor allowed one run on four hits in the second contest, helping fourth-ranked Campbellsville University to 9-4 and 3-1 victories over Cumberland in softball action Saturday at the CU Softball Field.

It marks the first two-game losing streak for the Phoenix (24-7, 2-4 Mid-South) since dropping both games in the season-opening doubleheader against Truett-McConnell on February 20.

Smith belted a three-run homer in the first inning and two-run shots in the fifth and sixth, expanding the Tigers lead whenever the Phoenix pulled close. Tori Humphrey collected three hits and scored on all three of Smith’s home runs in the contest while Jacqueline Roof added three hits for Campbellsville (24-3, 6-0).

Gailor (7-3) allowed a double to Tyra Graham and a single by Imani Torregano to start the second contest but retired 13 straight batters until a walk in the fifth. The righthander walked one, struck out five and worked around a single and a fielder’s choice where no out was recorded in the sixth with the Tigers clinging to a 2-1 edge.

Roof hit a solo homer to leadoff the second contest and Ryleigh Oldham posted an RBI single in the second to give Campbellsville the lead for good. Humphrey’s run-scoring double down the rightfield line added an insurance run in the seventh for the visitors.

Phoenix hurler Morgan Arndt (7-4) pitched well but took the loss, giving up three runs on eight hits. She walked three and struck out four. Graham finished 2-for-3 with a run scored for CU.

In the opener Rebecca Miller reached on an error with one out and Humphrey singled before Smith delivered a three-run homer for a quick 3-0 Campbellsville lead.

Quint retired seven of the first eight batters for the Phoenix before Woodring and Graham both singled with one out in the third, but Torregano grounded out and Caplinger flied out to end the threat.

Cumberland got on the board in the fourth when Brigid Antonelli singled and Tawnee Hegre reached on an errant throw from Humphrey on a sacrifice attempt. A groundout by Courtney Miles pulled Cumberland within 3-1.

Humphrey singled and Smith followed with a two-run homer to right in the fifth, extending the Campbellsville lead to 5-1, but the Phoenix answered with two runs in the bottom of the inning.

Woodring singled and Graham was hit before Torregano grounded to the pitcher, but Quint’s throw got away, allowing Woodring to score on the play. Cumberland executed the double steal for the second run of the inning, making it 5-3.

Campbellsville came right back in the sixth, though, starting with a leadoff single by Oldham, who moved to second on Miller’s sac bunt. Humphrey then singled to right, plating Oldham, and Smith followed with her third home run of the game, pushing the Tigers advantage to 8-3.

In the bottom of the inning Miles reached on an error and Kayala Hoppenjans beat out a bunt for a single before a single up the middle by Shelby Phelps loaded the bases. Woodring walked, forcing in a run, but Cumberland failed to push across any more runs thanks to a pair of ground balls and a strikeout.

The Tigers added another run in the seventh when Mia Aldridge led off with a single and moved to second on Kelly Wheeler’s sac bunt. Roof’s two-out single to left plated the final run of the first contest.

Roof started the second game with a solo homer to leftcenter, but the Phoenix answered with a double by Graham and a single from Torregano. Antonelli’s groundout plated Graham, evening the contest at one.

Ryley Whitney singled to leadoff the second inning for Campbellsville but was erased on a groundout by Aldridge. Wheeler’s sac bunt set up a two-out RBI single by center by Oldham for a 2-1 Tigers advantage.

Cumberland did not manage another baserunner against Gailor until a one-out walk to Hoppenjans in the fifth inning while Arndt continued to work in-and-out of trouble, including a single, walk and hit by pitch in the third, an error in the fourth and a double in the fifth.

Graham singled and stole second in the sixth inning and Torregano got about via a ground ball, but a strikeout, a popout and a flyout ended the threat.

Roof and Miller both singled with one out in the seventh for Campbellsville and Humphrey followed with the RBI double, pushing the Tigers lead to 3-1.

Cumberland and Campbellsville finish the four-game series Saturday with a Noon doubleheader.