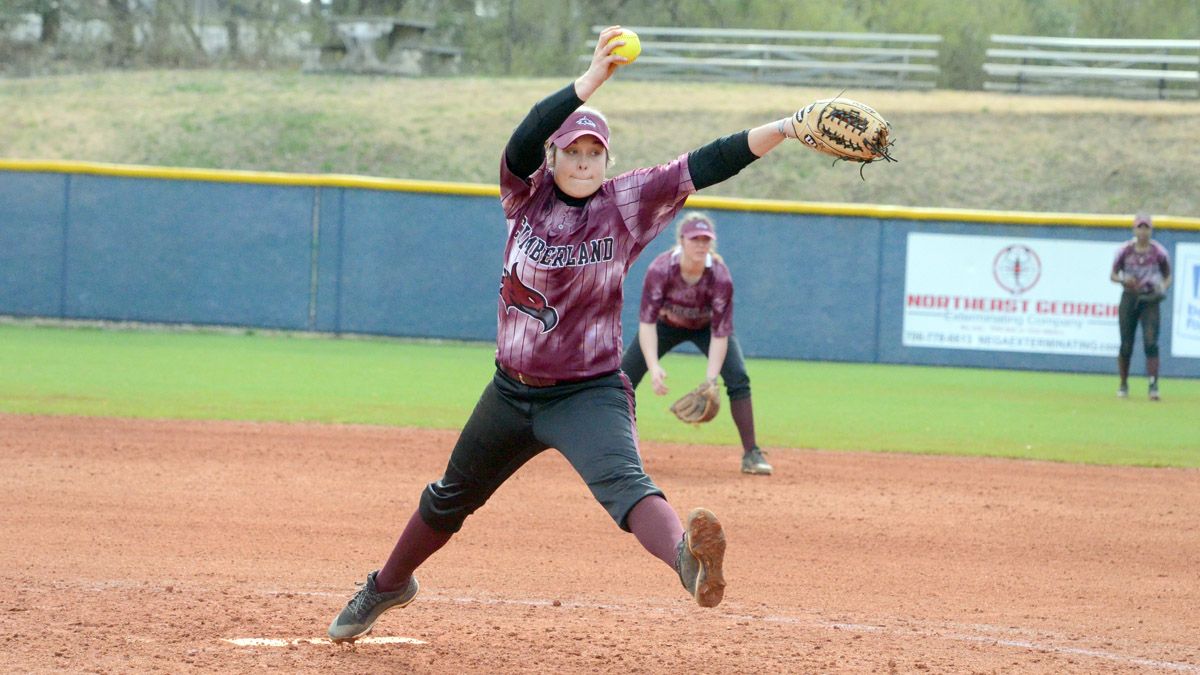 CLEVELAND, Ga. – Kayley Caplinger tossed a four-hit shutout, striking out six, and Brigid Antonelli delivered a two-run single in a four-run fourth inning, helping Cumberland to a 5-0 victory and a doubleheader split with 20th-ranked Truett-McConnell in softball action here Wednesday.

The Phoenix (7-2) lost the first game, 7-6, in eight innings despite scoring five times in the first and once more in the eighth.

Caplinger (3-1) allowed just seven total baserunners in the victory, walking two and hitting another, but the Bears (12-3) managed two runners in the same inning in the second and sixth innings. The CU righthander got a strikeout and lineout to end the second and a pop-out to finish the sixth.

Cumberland led 1-0 thanks to an RBI double from Caitlyn Griffin in the second inning and Imani Torregano’s bases-loaded bunt for a single pushed across the first run in the fourth inning. Two batters later Antonelli ripped a two-run single to left and Torregano scored from first on the play when the throw from the outfield got away.

The Phoenix committed six errors and gave up three unearned runs in the first contest. Courtney Miles drove in two runs with a single and Madison Woodruff’s two-run double gave CU a 5-0 advantage after a half inning.

The Bears countered with two runs in the first and second innings and tied the contest in the fourth. Cumberland reliever Natasha Trujillo worked in-and-out of trouble in the fifth and sixth innings to keep the game knotted at five.

Antonelli’s sacrifice fly to shallow center plated Torregano with the go-ahead run in the eighth, but Truett-McConnell countered with an RBI triple from Sara Sullivan and a groundout by Lawson that drove in the winning run.

Karley Hobbs (7-0) entered the game in relief in the first inning for TMU and allowed just a single and a walk after the first. She gave up two runs, one earned, on four hits with four strikeouts in 7.1 innings.

Sullivan finished with two hits, two RBIs and three runs scored while Morrison had two hits and scored twice for the Bears.

Cumberland got started quickly in the opener thanks to wildness from TMU starter Bethany Hyde, who walked Torregano, Caplinger and Paolo Del Valle. Torregano scored on a wild pitch and Miles delivered a two-run single.

Griffin singled to right and Woodruff drilled a two-run double to leftcenter, putting the Phoenix ahead, 5-0, and forcing a pitching change by the Bears.

Truett-McConnell posted two runs in the bottom of the inning thanks to an error and two fly balls that could have been caught.

Kaitlynn Johnson doubled over the head of Griffin in leftfield and Sullivan reached on an error, plating a run. Brie Levy bunted the runner to second and after a groundout, Kathrine Kozlowski’s deep fly ball to deep rightcenter went off the glove of Torregano, allowing the second run to come across and cutting the CU advantage to 5-2 after an inning.

In the second Macey Dunaway walked with one out for TWU and Jaden Morrison beat out a bunt between the plate and circle. Johnson drilled a triple into the gap in rightcenter, plating both runners and making it 5-4 Phoenix.

Morrison’s speed played a factor again in the fourth when she bunted her way on for the second time in two at-bats. She stole second and moved to third when the throw got away. Sullivan dumped a single into short leftcenter, plating the run and tying the contest at five.

Peyton Wilson’s grounder went off the glove of Trujillo to start the fifth for the Bears and Alicia Price’s bunt was thrown away trying to get the out at second. Dunaway pushed the runners to second and third with a sac bunt, but Morrison grounded back to the pitcher and Johnson grounded out to end the threat.

In the sixth Lawson singled to center with two outs and Kozlowski walked, but Wilson grounded out to third to end the inning.

Truett-McConnell got another chance in the seventh with a leadoff single by Price, but a sac bunt attempt was caught by a diving Antonelli and the game headed to extra innings.

Caplinger moved Torregano to third with a sac bunt to start the eighth and Antonelli’s short fly ball to center scored the run, but the lead was short-lived.

Sullivan failed to get the bunt down but her soft liner into leftcenter got past a diving Taylor Woodring and went all the way to the wall. Johnson scored and Sullivan had a triple on the play. She scored two batters later on a groundout by Lawson and the Bears won the opener, 7-6.

Cumberland struck first in the second contest, with Del Valle drawing a one-out walk in the second inning. Tawnee Hegre grounded into a fielder’s choice, but Kaylee Luckett walked. Griffin’s soft liner went off the glove of the TMU third baseman and down the leftfield line for a double, plating double for a 1-0 CU edge.

The Phoenix loaded the bases in the third with a hit batter, a walk and an error but Hegre lined out to center to end the threat.

Luckett singled to center to leadoff the fourth inning and Woodring singled to center with one out. Graham’s bloop single to short rightcenter loaded the bases, setting up a beautiful bunt from Torregano between the circle and third base, plating a run.

Antonelli then delivered the two-run single and Kataryna Fuller’s throw to the plate got away, allowing Torregano to come around for the final run.