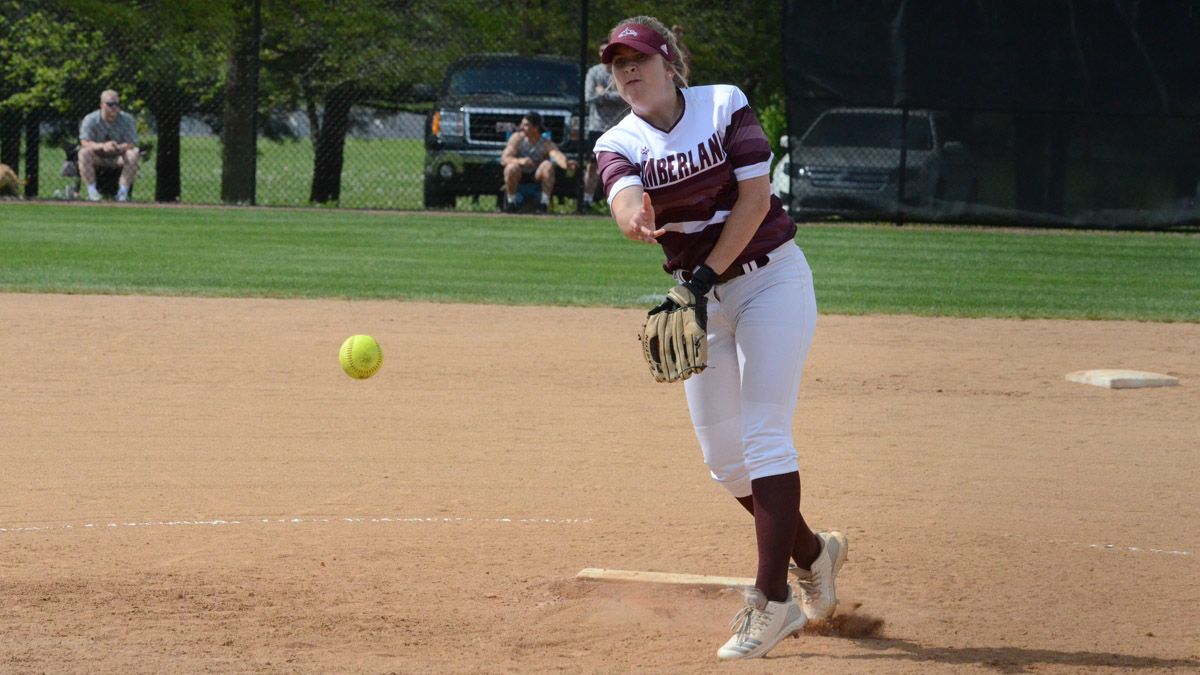 GEORGETOWN, Ky. – Morgan Arndt tossed a complete game and Kayley Caplinger drove in both runs in a 2-1 Cumberland victory in the opener but Georgetown College rebounded with a 7-5 win in the second contest thanks to four CU errors in softball action here Monday.

The Phoenix (21-20, 7-15 Mid-South) end the regular season with a four-game series this weekend at home against Kentucky Christian beginning Friday at 2 p.m.

Arndt (11-7) allowed one run on five hits, walking two and striking out three in seven innings of work. The righthander got out of trouble in the first inning, loading the bases with a pair of walks and an infield single, and retired 12 straight before a two-out single in the fifth.

The Tigers got a run in the sixth but the senior set down the side in order in the seventh, including a terrific backhand stab on a line drive to end the game by Brigid Antonelli.

Tyra Graham and Caplinger each posted two hits and Graham scored both runs for CU in the victory. Kristen Klemish tallied two of Georgetown’s five hits.

Hannah Morton (11-9) gave up two runs on five hits in a complete game, striking out four.

Georgetown (23-20, 10-10) plated two runs in the second inning and three more in the third, three of those unearned because of four Cumberland errors in the second contest. Cassidy Janes also hit a pair of homers, a solo shot and a two-run blast, for the Tigers in a 7-5 win.

Graham collected three hits and scored twice while Taylor Woodring added three hits, a run and one RBI before leaving the game with an injury. Caplinger (7-9) allowed five runs, two earned, on five hits in 2.1 innings to take the loss.

Georgetown starter Audrey Dodd allowed four runs on seven hits in 3.1 innings. Megan Brankamp (1-1) got the win, giving up one run on three hits in 3.2 innings of relief.

Graham dumped a leadoff single just inside the leftfield line to leadoff the opener and Madison Woodruff followed with a single to left. The runners moved up on a sacrifice bunt by Antonelli and with two outs, Caplinger’s single in the hole on the leftside plated Graham for a 1-0 CU edge.

Cumberland followed a similar script in the third with a leadoff single to left by Graham, who took second on a sac bunt from Woodruff and third on a wild pitch. Paola Del Valle was hit with two outs and Caplinger singled sharply to left, scoring Graham for a 2-0 Phoenix advantage.

Klimesh singled off the glove of Arndt to start the sixth for the Tigers and Cassie Rannells beat out an infield single. The runners moved up on a sacrifice bunt by Janes. Arndt got a pop-out but Mallory Myers plated a run with an infield single up the middle, cutting the CU lead to 2-1.

The Phoenix got on the board first in the second contest after a two-out single in the second inning by Kaylee Luckett. Woodring followed with a double down the leftfield line, plating Luckett for a 1-0 CU edge.

Poor defense by Cumberland led to a pair of runs for Georgetown in the bottom of the inning.

Morton singled to center to leadoff and with one out, Allison Watson grounded to third, but Antonelli’s throw to second was wild. Grace Mullins was hit, loading the bases, and a chopper to short by Hannah Howes was bobbled by Graham, allowing a run to come across.

Klimesh also grounded to short but Graham got an out this time, though Watson scored for a 2-1 Tigers lead.

Janes lined a homer to leftcenter with one out in the third and Morton followed with a single to center. Pinch-runner Kodi Forish stole second and scored on a single to left from Corrin Robinson, ending the day in the circle for Caplinger.

With two outs in the inning Mullins reached on a fielding error by Graham, with Robinson scoring for a 5-1 Georgetown advantage.

Cumberland got back into the game with three runs on three hits in the fourth, beginning with a leadoff single by Woodring. With one out Imani Torregano walked and Graham’s grounder through the left side loaded the bases.

Woodruff chopped a single off the glove of the third baseman into leftfield, plating two runs, and Antonelli’s grounder to short plated Graham, pulling the Phoenix within 5-4.

The Tigers answered in the bottom of the inning, though, with a leadoff single to center by Myers and a two-run homer to left from Janes, extending the advantage to 7-4.

In the sixth Graham singled, stole second and scored on a pair of groundouts.

In the seventh Caplinger led off with a single and pinch-runner Kelsei Boyle took second on a wild pitch. Luckett lined out to deep center and pinch-hitter Kristian Davis lined out to second. Pinch-hitter Courtney Miles flied out to left to end the contest.