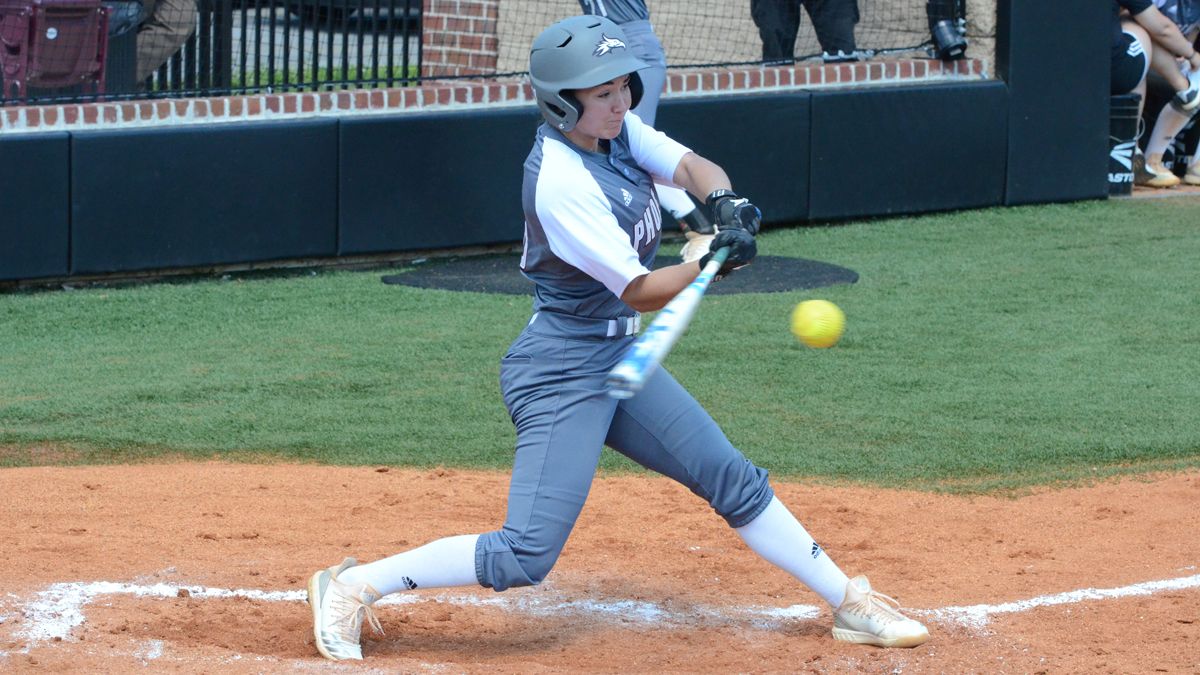 LEBANON, Tenn. – Morgan Arndt allowed one run in a complete-game in the opener and Kaylee Luckett posted two hits and two runs in the second contest, as Cumberland held off Kentucky Christian in the final inning to complete a doubleheader sweep, 3-1 and 5-4, in softball action Friday at Billy Dee Ross Stadium.

The Phoenix (23-20, 9-15 Mid-South) and Knights (22-27, 4-18) complete the series with another doubleheader Saturday beginning at 11 a.m. Senior Day activities for seven players will take place between games.

Arndt (12-7) allowed one run on seven hits, walking four and striking out four in the opener. The righthander stranded the bases loaded three times and 11 KCU runners in all, working in-and-out of trouble in the first, fourth and sixth innings.

Lora Thompson (7-15) took the loss for the Knights, giving up two earned runs on seven hits with three strikeouts. Summer Collins was 4-for-4 and Whitney McKay added two hits for KCU.

Kentucky Christian scored twice in the first inning but Cumberland gained the lead with three runs in the third, including an RBI double by Luckett and a run-scoring single from Taylor Woodring. Luckett drove in what proved to be the game-winning run with an RBI single in the fifth.

KCU trailed 5-2 headed to the seventh but an RBI single by Taylor Jording and a run-scoring double from Taylor Coleman cut the Cumberland lead to 5-4. Rachel Purser grounded out to end the game with the tying and winning runs in scoring position.

Kayley Caplinger (8-9) got the win for CU, giving up four runs on 12 hits. She walked one and struck out six, leaving 11 KCU runners on base as well. Caplinger, Woodring and Brigid Antonelli each posted two hits for the Phoenix.

Coleman (13-10) suffered the defeat in the circle for the Knights, allowing three earned runs on 12 hits. McKay was 3-for-4 with an RBI and Collins, Coleman and Jade Spurlock each finished with two hits.

The Knights loaded the bases in the first inning in the opener after a bunt single by Collins and a walk to Spurlock. With two outs Sydney Houck reached on an error by Antonelli, but Jording struck out to end the inning.

Tyra Graham hit an inside-the-park home run to start the bottom of the first for the Phoenix.

Arndt retired 6-of-7 batters in the second and third innings before the Knights tied the game in the fourth.

Houck singled to right to leadoff and moved to second on a sacrifice bunt by Jording. McKay singled to right as well, putting runners on the corners, but McKay was thrown out trying to steal second.

Thompson and Lili Cortese both walked, loading the bases, and Collins delivered an RBI single through the left side.

Kentucky Christian loaded the bases again in the sixth, starting with a one-out single by McKay and a two-out walk to Cortese. Collins reached on another bunt single, but Katerina Anthony grounded out to keep the contest tied at one.

Cumberland took the lead for good in the bottom of the inning, with Del Valle and Caplinger both singling the leadoff the frame. The runners moved up on a wild pitch and one run scored on Luckett’s grounder to third that was booted by Anthony. Woodring followed with a sacrifice fly, plating pinch-runner Bailey Giordano.

Kentucky Christian started fast in the second game after a leadoff single and stolen base by Collins. Anthony reached on a throwing error by Graham, taking second on the play, and Collins ended up at third. Spurlock and McKay posted RBI singles up the middle for a quick 2-0 KCU advantage.

Cumberland answered with a run in the bottom of the frame when Antonelli recorded a two-out single and Del Valle reached on an error by Spurlock. Caplinger singled to center, scoring a run to cut the deficit in half.

Coleman led off the second inning for the Knights with a single but was doubled off on a line drive by Purser. Collins bunted her way on again and Anthony reached on a fielder’s choice, with no out recorded on the play, but Caplinger induced another groundout to end the inning.

The Phoenix took advantage of an error in the third, pushing across three runs.

Graham led off with a single and stole second and Woodruff bunted, but her sacrifice attempt was thrown away by Zoe Deaton, with Graham scoring on the play. With two outs Caplinger singled to right and Luckett followed with an RBI double to rightcenter. Woodring drove in a run with an infield single, giving CU a 4-2 advantage.

Kentucky Christian put two runners aboard in the fifth inning with a leadoff single by Anthony and a two-out base hit by McKay, but Gracie Robinson popped out to end the frame.

In the bottom of the inning Del Valle singled with one out and pinch-runner Jasmine Krauss stole second. Luckett plated the run with a two-out single to left, extending the lead to 5-2.

The Knights again got two baserunners in the sixth after a leadoff walk to Jording and a fielder’s choice by Collins where no out was recorded, but Anthony grounded out in the six-hole to end the threat.

In the seventh Spurlock and Houck both singled to start the inning but McKay struck out and Robinson grounded to third, with the runners moving to second and third on the play. Jording singled up the middle, scoring a run, and Coleman doubled to right, plating another, before the game-winning groundout by Purser.