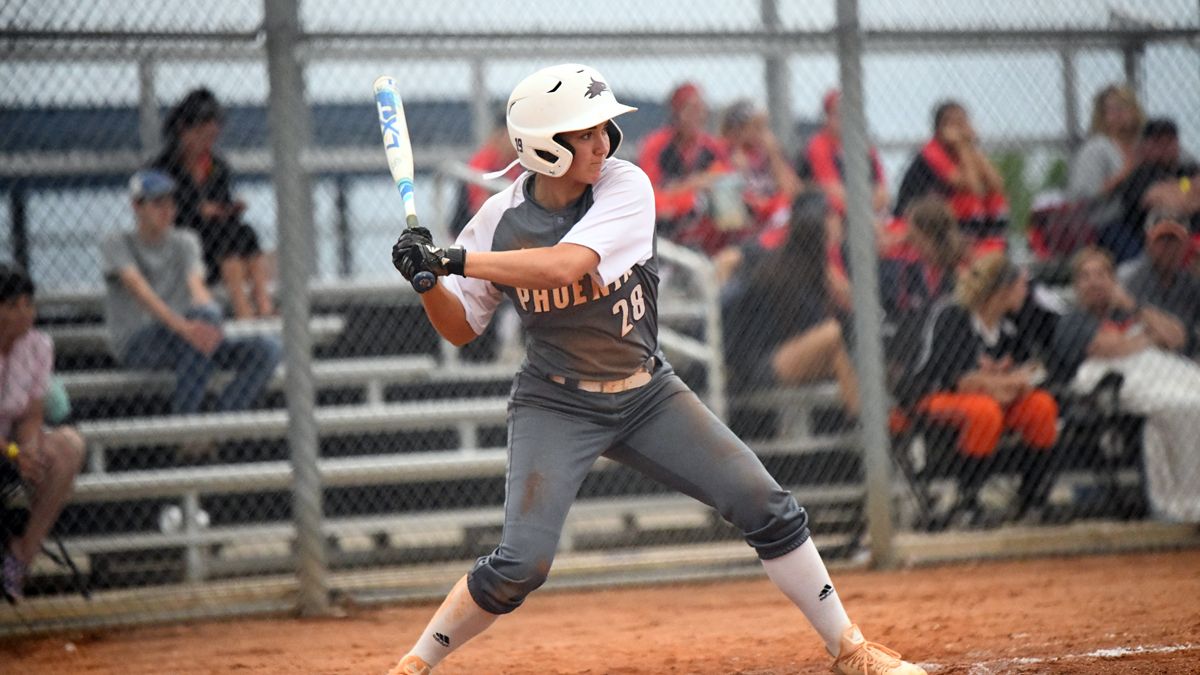 LEBANON, Tenn. – Cumberland softball lost 5-2 to Georgetown College in its first game of the Mid-South Conference Championships on Friday but Madison Woodruff, Kayley Caplinger and Kaylee Luckett each drove in two runs, as CU held off Kentucky Christian, 12-9, later in the day at Michael O. Buchanon Park in Bowling Green, Ky.

The Phoenix (26-21) advance to take on either Campbellsville University or Shawnee State at 5 p.m. on Saturday in another loser’s bracket game, weather permitting.

Cumberland scored three times in the first, four more runs in the second and five runs in the fourth, taking a 12-5 advantage, but the Knights plated four runs in the sixth to get close. KCU stranded 12 runners in the game, including the bases loaded in the fifth and two in the third, fourth and sixth innings.

Luckett drove in two runs with a two-out triple in the first for CU and Caplinger’s two-out single in the second inning put the Phoenix ahead, 7-3. Woodruff added a two-run double to cap a five-run fourth inning.

Caplinger (10-9) allowed four earned runs on nine hits in four innings for the win. She posted one and struck out three. Natasha Trujillo picked up the save, her second of the year, getting the final five outs without giving up a hit or a run with one walk and one strikeout.

Paola Del Valle and Imani Torregano each posted two hits for the Phoenix.

Tyra Graham walked to leadoff the bottom of the first and stole second before moving to third on a sacrifice bunt by Woodruff. Brigid Antonelli struck out but reached on a wild pitch and Graham scored on the play. Taylor Woodring followed with a double and with two outs, Luckett tripled to deep leftcenter, driving in two runs for a quick 3-0 CU advantage.

Kentucky Christian answered with three runs in the second, starting with leadoff singles by Gracie Robinson and Taylor Jording. Sydney Houck’s sac bunt pushed the runners to second and third and Taylor Coleman doubled, scoring both runners. With two outs, Summer Collins also hit a two-bagger for an RBI, evening the game at three.

Cumberland came right back in the bottom of the inning when Tawnee Hegre singled to left and pinch-runner DeeDee Dunn went to second on a groundout by Torregano. Graham reached on an error and stole second before a fielder’s choice where no out was recorded loaded the bases.

Antonelli’s infield single plated a run and Graham came across after a throwing error on the play. With two outs Caplinger helped herself with a two-run single to center for a 7-3 CU lead.

Coleman singled to leadoff the fourth for the Knights and pinch-runner Shaylee Hiestad scored on a double by Thompson. Collins bunted her way on and pinch-runner Lili Cortese moved to third on the play and scored on an errant throw by Del Valle, pulling KCU within 7-5.

Caplinger and Luckett both walked with one out in the bottom of the inning and Del Valle singled to left, scoring pinch-runner Baylee Giordano. Dunn bunted for a base hit, plating Luckett, and pinch-runner Kelsie Boyle came around on a bad throw by Houck.

With two outs Torregano singled and Graham walked before Woodruff’s two-run double to deep centerfield, extending the lead to 12-5.

In the sixth Jade Spurlock drew a leadoff walk and Whitney McKay reached on an error by Woodruff. Gracie Robinson doubled home a run and McKay came across on a wild pitch. Jording and Houck both singled, with McKay scoring on Houck’s hit but Robinson was thrown out at the plate by Woodring.

The Knights were not done though, as Coleman doubled to score Jording and Thompson’s single to left pushed across Houck, making it 12-9 Phoenix. Trujillo entered and got a pair of groundouts to end the inning and gave up just a two-out walk in the seventh to post the save.

Caplinger collected two hits and she and Luckett each drove in a run, but Cumberland stranded seven runners in a 5-2 loss to Georgetown earlier in the day. The Tigers plated all of their runs in the first three innings against CU starter Morgan Arndt.

Graham struck out to start the game but reached on a passed ball and moved to second on a sac bunt from Woodruff. Caplinger’s single to shallow left plated Graham for a quick 1-0 edge for the Phoenix.

The Tigers answered in the bottom of the inning, starting with a leadoff single by Kristen Klimesh, who moved to second and third on passed balls. Cassie Rannells singled through the hole at second for an RBI and with two outs, Allison Watson tripled to left, scoring Rannells for a 2-1 Georgetown advantage after an inning.

In the second Hannah Howes walked and Abigail James moved the runner to second with a sacrifice bunt. Grace Mullins bunted her way on for runners on the corners. She was thrown out trying to steal second but Howes scored on the play for a 3-1 Tigers lead.

Georgetown got two more runs in the third when Rannells singled with one out, but she was erased on a fielder’s choice by Cassidy Janes. Watson walked and Corrin Robinson singled to center, loading the bases. Howes followed with a two-run single to leftcenter, making it 5-1 Tigers.

Cumberland got two runners on base in the fifth thanks to a walk to Torregano and a single by Graham, but Woodruff struck out and Antonelli grounded out to end the threat.

In the sixth Caplinger singled and pinch-runner Jasmine Krauss stole second. Luckett followed with an RBI double down the leftfield line, but she was stranded at third with CU trailing 5-2.

Arndt (13-8) took the loss, giving up five runs on seven hits with two walks and two strikeouts in three innings. Trujillo worked three scoreless frames of relief, allowing just one hit with one walk and one strikeout.

Hannah Morton posted the victory for Georgetown, giving up two runs on six hits in six innings. She walked one and struck out four. Audrey Dodd got the final three outs for the save.