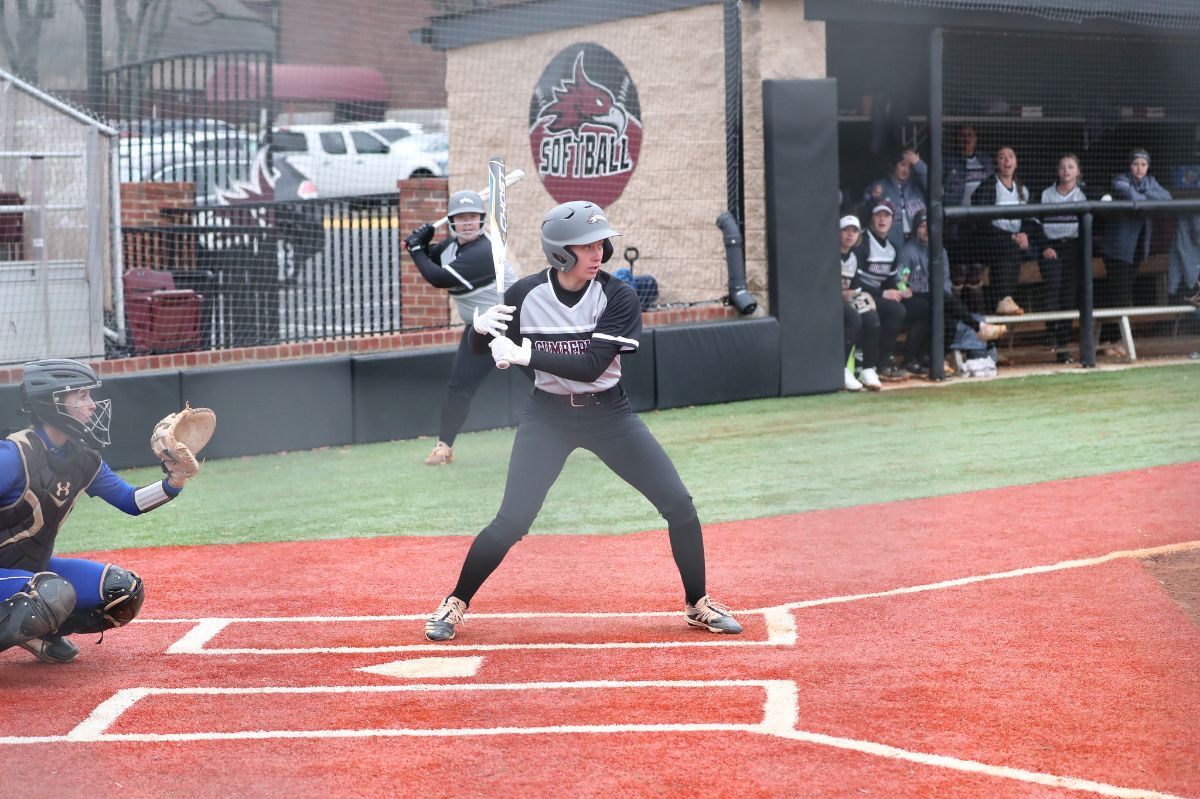 LEBANON, Tenn.-- Cumberland Softball (2-4, 2-2 MSC) split their second doubleheader of the year against Thomas More (2-4, 2-2 MSC). The Phoenix won the first game 12-11 in an exciting fashion as both teams combined to post 31 total hits. The Saints got the better of the Phoenix in game two as the Saints won 6-5.

Thomas More struck fist in the first game of the doubleheader as Elana Harrison singled up the middle to give the Saints a 1-0 lead. The Phoenix responded in the bottom of the first as Madison Koczersut hit an RBI single, bringing home Allie Burleson. The Saints had a big third inning and put up three runs to lead 4-1 over the Phoenix.

CU responded again in the bottom of the third with three runs of their own to tie it up at 4-4. Kenzie France collected an RBI single to right field, and Allyson Shoulders grounded out to the second basemen with loaded bases for an RBI. Macy Powell collected the final RBI of the inning on a single down the right-field line.

The very next inning, Thomas More went up 6-4 on the Phoenix after a triple from Hailey Mcadoo scored two runs. Cumberland's Ashtyn Blair had an answer for that when the bases were loaded as she blasted a grand slam out of left field to give CU an 8-6 lead over the Saints. In the fifth inning, after Thomas More scored a run to make the score 8-7.

The Phoenix scored two runs in the bottom of the fifth to expand their lead to 10-7. Abby Peach reached first on a bunt, and Macy Powell scored on a throwing error by the catcher. Koczersut followed that up with an RBI single into left field, giving the Phoenix a three-run advantage. Thomas More had a big sixth inning to reclaim the lead 11-10 over the Phoenix. A single by Adrian Marquez and a double by Harrison brought in four combined runs to give the Saints the late advantage.

The Phoenix had done as they did all game and responded in the bottom of the sixth. Abby Peach came up to bat and hit a two-RBI triple to give the Phoenix a 12-11 lead. Annalee Moore closed out the game for the Phoenix pitching the final three innings of the game and earning the win.

Mariah Clark tossed the first four innings of the game and finished with five strikeouts while giving up six earned runs. Cumberland and Thomas More combined to post 31 hits in total during the game, with CU leading the way with 16 hits overall. The Phoenix also did not commit an error in the game for the first time this year.

Three Phoenix batters had three-hit performances in the game, beginning with Burleson, Koczersut, and Blair. Kenzie France, Macy Powell, and Abby Peach each had two hits apiece in the game, while Clark ended the day with one hit. Ahstyn Blair led the Phoenix with four RBIs in the game, followed by Peach and Koczersut with two each.

Cumberland could not get their bats rolling in game two as they only pick up five hits. Powell picked up two hits with an RBI double in the game.

Thomas More got things started in the top of the first after an error by Cooper brought home a runner from third giving the Saints an early 1-0 lead.

The Phoenix wasted no time answering in the bottom half of the second. A walk and a hit batter put two runners on before a passed ball advanced them to second and third. Clark singled down the right-field line to drive home a run and advance Koczersut to third. Blair stepped into the box with two on and one out and was able to bring home a run on a groundball to third.

Back-to-back singles and a walk loaded the bases for the Saints with one out in the top of the third. Burleson picked up a hard ground ball to third and had enough time to throw it home to keep the bases loaded with two outs. Unfortunately, Cooper hit the next batter to bring home a run tying the game at 2-2. Lauren Taylor hit an RBI single into center field and tried to stretch it into a double but was thrown out at second right before another Thomas More runner could cross the plate.

Powell started the bottom of the fifth with a lead-off single through the right side. Peach walked to put runners on first and second to set up a sac bunt from Evans to advance them to second and third with one out. Burleson sent a rocket through the left side to bring home a run. Waiting on deck was Koczersut who hit a deep sac fly to left for the second run of the inning giving the Phoenix a 4-3 lead.

Thomas More had two-out magic in the top of the sixth when Dawson sent a double to the wall in left-center to bring home a runner from second. Harrison came up next and hit a ball up the middle for an RBI single while advancing Dawson to third. Hobeika hit a line drive right over third base to bring home another run and give the Saints a 6-4 lead.

Things looked really promising for the Phoenix in the bottom of the sixth after two walks to start the inning. Powell came up to the plate with two on and one out and sent a double down the left-field line to drive in a run and force a pitching change. Kent came on to pitch out of the pen and worked herself out of the jam forcing a ground out and a flyout.

Higgins went on to pitch for Cumberland in the top of the seventh and produced a 1-2-3 inning bringing up the Phoenix hitters for one last chance where they would go down in order to end the game 6-5.

The Phoenix take the field tomorrow on the road at Union College in a doubleheader, with the first game beginning at noon.