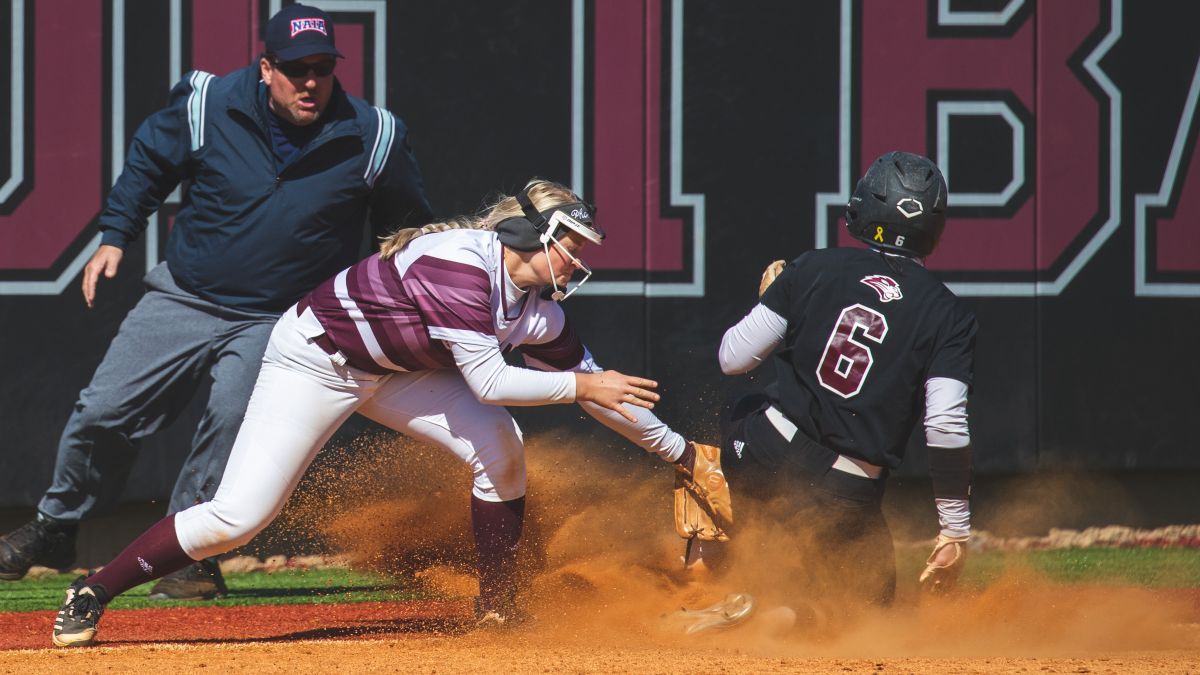 LEBANON, Tenn.--Cumberland softball held a 2-0 in the sixth inning of the second game, but No. 3 Freed-Hardeman tacked seven unanswered runs to win the series finale and sweep the Mid-South Conference series with the Phoenix.

Allie Burleson roped a one-out triple in the first inning, to give the Phoenix a golden opportunity to jump ahead of Freed-Hardeman, but Lady Lions starter Brittany Adiar punched out  two batters to get out of the inning unscaved.

Mariah Clark matched the performance by until the fourth inning when the Lady Lions scored four runs and never looked back.

Clark helped her cause in the bottom half of the inning by taking Adair deep to center field to cut the lead in half 2-1.

In the fifth, Annalee Moore came in relief top throw for Clark. Allie Mitchell greeted her with a leadoff double and Kennedy Harris reached on an error. Next batter, Catherine Crabb laid down a bunt that catcher Ashton Blair threw into right field allowing both runners to score on the play for a 4-1 lead.

The Lady Lion added two insurance runs in the seventh inning as Crabb singled home Harris and Annalise Jarnagin brought home Crabb with an RBI fielder's choice. The Phoenix went down in order in the bottom half to end the game.

Freed starter Brittany Adair picked up the win in a complete game five-hitter. She allowed just one run on Clark's home run in the fourth and struck out 17 batters.  Clark took the loss after giving up two runs in four innings.

Cumberland battled the entirety of game two but gave up a big inning in the seventh as they fell 7-2.

Emily Cooper got the ball in game two as she pitched seven complete innings with three strikeouts. Cooper threw five scoreless innings but the Lions found their rhythm in the sixth and eventually took the lead in the seventh while scoring seven runs.

Six different Phoenix hitters picked up a hit in the game while Koczersut and Peach recorded RBIs.

Cumberland struck first in game two after Peach drove in Clark from second with a two-out double.

The Phoenix extended their lead to 2-0 in the bottom of the fifth after Koczersut sent a two-out double into the right-center gap to bring home a run.

Everything looked like it was going in favor of the Phoenix until the top of the sixth inning. A leadoff single got things started for the Lions before Mitchell drove in a run with a double. Later in the inning, Norton hit a double of her own down the left-field line to bring home the tying run. Cooper worked her way out of trouble to end the inning before any more damage could be done.

Freed-Hardeman quickly found themselves with a lead in the top of the seventh after two home runs put them in front 5-2. The Lions pushed two more runs across in the inning thanks to three singles and an error.

Powell led off the final frame for the Phoenix and reached base on an error to get Cumberland started. Unfortunately for Cumberland, the next three batters would go down in order to fall 7-2 against Freed-Hardeman.

Cumberland will be back at home for a doubleheader on Tuesday starting at 1:00 p.m. as they take on Lane College.