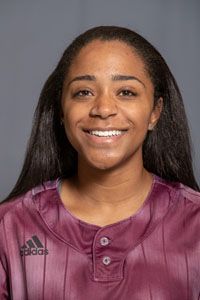 Imani Torregano is beginning her second year with the Phoenix as a Graduate Assistant with the softball team.

Torregano remains with the Phoenix after a successful 4 year playing career.  The Laurel, Maryland native was a four year starter and made an instant impact upon arrival, as she led the team in numerous categories her freshman year such as batting average, hits, runs, and stolen bases.  As a sophomore, she picked up right where she led off and even boasted her average up from .350 to .362.  Her junior and senior seasons seen her numbers continue to impress as she helped the Phoenix rebound from two losing seasons, to two strong winning seasons. Torregano earned three Second Team All Mid-South Conference selection from 2016-2018.

Torregano made 186 starts in her career and was a .337 career hitter in her time with the Phoenix.

Torregano recently graduated from Cumberland and is curruntly pursuing her master's degree.