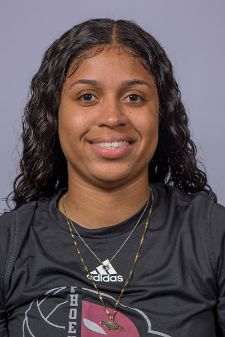 Anneka Harris begins her second season as a graduate assistant for the women's volleyball program this year.

Harris started her playing career at Florida State College at Jacksonville. While there she appeared in 33 matches posting 156 kills and 117 blocks. From FSCJ, she transfered to New Jersey Institute of Technology in Newark, New Jersey for her final two collegiate playing seasons. Over the two seasons, Harris appeared in 62 matches accumulating 272 kills, 126 blocks with 53 digs and 11 assists. Her senior year there she was voted team captain by her teammates.

Harris recieved her Associate's Degree in Liberal Arts from Florida State College at Jacksonville in May 2015. She continued to earn her Bachelor's in Science Technology & Society from New Jersey Institute of Technology in May 2017. Harris is currently pursuing her Master's at Cumberland.