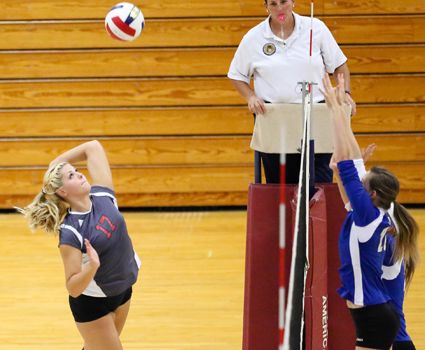 LEBANON, Tenn. – Mackenzie Gass led Cumberland with a game-high 18 kills as the Bulldogs fought to victories in three extremely close sets en route to a straight-set win over Rio Grande on Tuesday night at the Dallas Floyd Recreation Center.

Rio Grande began the first set, as it would throughout the match, taking control early. The Red Storm opened the night on a 7-2 run, leaving the Bulldogs fighting from behind.

CU would do just that, scoring eight of the next 10 points including kills from Danielle Girardeau, Abby Shaw and Jennifer Daniels. A pair of kills from Gass brought the score even at 10.

The two squads played a fairly even rest of the set, again meeting at a 22-22 tie. Cumberland would rattle off three of the next four points to take the all-important first set. A strong swing by Shaw from a set by Kasi Wells proved to be the final point.

The Red Storm again broke out to an early, albeit small, advantage in the second, taking a 12-7 lead. Rio would continue to control the set, earning three straight set-point opportunities. The Bulldogs would again respond.

Three straight kills from Shaw, Gass and Daniels knotted the score at 24, forcing one team to score consecutively for the win. After trading points to a 28-28 tie, Sheridan Jones completed a kill and McCrea Barney landed a service ace, giving the Bulldogs a 2-0 match lead.

In what would be the third and final set, Rio Grande again jumped out to a commanding lead, scoring eight of the first nine points. Again, CU responded with a run, eventually evening the score at 14.

The two squads continued the even play to a 23-23 score, setting up the final two points for the Bulldogs. On serves from Barney, a pair of errors from the Red Storm sealed their fate in the loss.

Cumberland recorded a total of 44 kills in the match to go with a .173 attack percentage. Wells tabbed a team-high 22 assists while Barney added 14 digs.

The Bulldogs conclude an 11-game homestand this weekend while hosting the Cumberland Classic. CU will play matches against Tennessee Temple (1 p.m.) and Kentucky Christian (3 p.m.) on Friday before taking on Ohio Valley (9 a.m.) and Freed-Hardeman (3 p.m.) on Saturday.