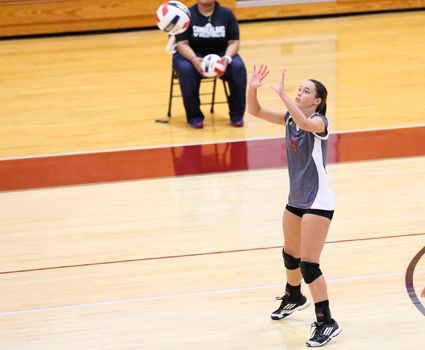 LEBANON, Tenn. – Cumberland hit just .142 in the final two matches of the Cumberland Classic, falling twice to Ohio Valley and Freed-Hardeman on Saturday at the Dallas Floyd Recreation Center. The Bulldogs finished 2-2 in the classic.

Abby Shaw recorded a team-high 20 kills on the day, including a season high 16 against Freed-Hardeman in the second match. Setter Kasi Wells recorded 33 assists and, in her first appearance at libero this season, Laura Peavy added 31 digs to pace CU.

Against Ohio Valley, the Bulldogs were unable to match a ferocious attack in the first set as the Scots recorded a strong .324 attack percentage. OVU recorded 19 kills in the set, including six from both Amanda Weatherwax and Imani Ward.

CU was not overmatch in the set however, as the two squads battled back and forth for much of the frame. The set featured 15 ties and eight lead changes.

Cumberland looked to hold the advantage taking a late 23-20 lead after a service error from the Scots and a Laura Peavy service ace.
Needing a run, OVU recorded four of the next five points, taking advantage of three errors from the Bulldogs. A kill from Ward and a service ace from Weatherwax would put a cap on the set, giving Ohio Valley the 26-24 win.

In the second set, the two teams again remained close throughout the early going. Following a 10-10 tie, OVU used a 6-2 run to take control of the match.

The Bulldogs would respond with a late run Jennifer Daniels, Jena Whitt and Sheridan Jones each recorded kills to bring CU within a point at 21-20. But again the steady attack of the Scots allowed OVU to notch four of the final five points en route to a 25-22 win.

The Scots took control a bit earlier in the third and final set to put a cap on the sweep. Tied at 12, OVU 8-4 run to grab a lead it would never relinquish. As Imani Ward swung for her match-high 13th kill, the Bulldogs found themselves defeated 25-20 and 3-0 in the match.

Cumberland entered the second match of the day looking like a team on a mission, taking the opening set against Freed-Hardeman, 25-11. The Bulldogs registered a .467 attack percentage, tallying 15 kills.

The Lions were able to even the score in set two, breaking out to a 12-6 advantage and holding on for the win at 25-25. Unlike the first set, CU was unable to control the attack, hitting .000 in the second.

The third set proved to be pivotal as both teams refused to give an inch, playing to a 25-25 tie before Freed-Hardeman grabbed the final two points. Cumberland played from behind after taking a 21-20 advantage.

Deflated after dropping the third, Cumberland never found a rhythm in the final set as FHU coasted to its easiest win of the match. FHU controlled the point of attack, recording 15 kills and a .270 attack percentage. Freed-Hardeman’s Daymari Brito notched a match-high 21 kills on the afternoon.

Ending an 11-match homestand, Cumberland returns to action Wednesday at Georgetown College at 6 p.m. A win would return the Bulldogs to .500 in Mid-South Conference play.