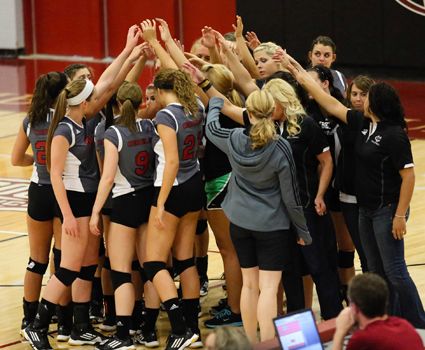 Cumberland was unable to find an answer for the Georgetown attack as the Tigers won in straight sets. (Credit Steve Wampler)

GEORGETOWN, Ky. – Nationally ranked No. 18 Georgetown College controlled nearly every facet of a straight-set sweep over the Cumberland volleyball squad Wednesday night at the Davis-Reid Alumni Gym, including recording 47 kills to the Bulldogs’ 20.

Georgetown junior Allyson Wilbourn led the match with 11 kills on an impressive .458 attack percentage, leading the Tigers to a team-total .330 attack mark in the match. CU was unable to match the attack-heavy GC, hitting just .020.

The Tigers jumped out to an early lead in the first set, grabbing an 8-0 lead before Cumberland got on the scoreboard. GC continued to dominate the set, leading by as much as 17 points. The Bulldogs were able to rally late, scoring five of the final seven points to take some momentum into the second set.

CU found an energy to open set two, matching the Georgetown attack with two kills from Jenifer Daniels and one from Sheridan Jones.

Following a Cumberland timeout with the score 15-12 in favor of GC, the Tiger attack woke up as the squad rattled off eight straight points to take a 23-12 advantage. Cumberland scored the next three but it was again too late to mount a comeback as Georgetown took the set 25-15.

The third and would-be final set reflected that of the second as the two squads played close in the early going. Cumberland trailed by just our points late in the match at 18-14 before, for the third-straight set, the Tigers used a run to put the game out of reach.

This time, it would be seven consecutive points to bring the set and the match to a close with a 25-14 victory.

The Bulldogs face another tough road test Tuesday, traveling to University of the Cumberlands for a 4 p.m. match in Williamsburg. The Patriots bested CU in straight sets in their first meeting of the season on September 24 at the Dallas Floyd Recreation Center.