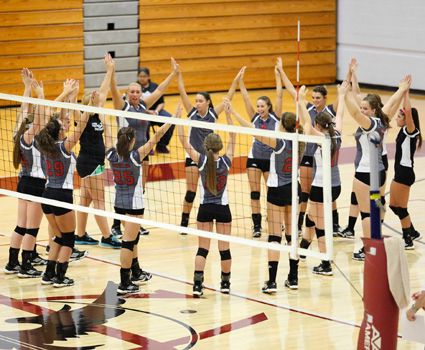 ST. CATHARINE, Ky. – Junior Shauna Stone and sophomore Rebecca Just each recorded 10 kills as St. Catharine hit .305 as a team to take down Cumberland in straight sets at Lourdes Hall on Thursday night.

CU responded in the second set, playing point-for-point with St. Catharine for much of the frame. Trailing 20-17, the Bulldogs answered with a 4-1 run to knot the score at 21. The two squads exchanged points before SCC took a 23-22 lead.

Cumberland seemingly tied the contest at 23 with a kill, however a Bulldog player was deemed in the net, allowing the Patriots a pair of set points. The home team answered on the second attempt, grabbing a 25-23 win.

The Patriots wasted no time in the third and final set, taking hold of an 18-8 advantage and coasting to a 25-10 win.

Freshman Abby Shaw led the Bulldogs with 5 of just 15 recorded kills in the match. Setter Kasi Wells paced the squad with 13 assists.

CU now returns home for five straight matches at the Dallas Floyd Recreation Center, beginning with an October 15 contest at 6 p.m. against Georgetown College. The Tigers defeated Cumberland in straight sets on October 2.