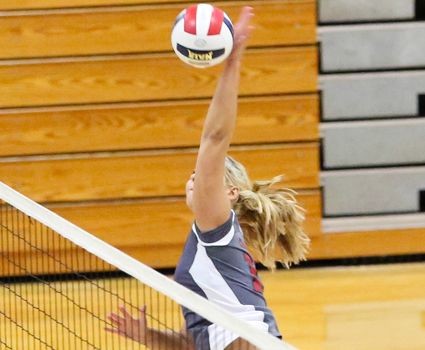 LEBANON, Tenn. – Cumberland started slowly in the first two sets and 24th-ranked Georgetown College pulled away in all three, sweeping the Bulldogs behind eight kills from Caraline Maher in volleyball action Tuesday night at the Dallas Floyd Recreation Center.

Cumberland (12-14, 3-8 Mid-South) lost for the sixth straight outing, struggling out of the gate in the first two sets and hitting -.143 in the match. Mackenzie Gass led the Bulldog with six kills, but CU committed 23 errors to 13 kills overall.

Lindsey Martindale and Stephanie Gurren posted 14 and 11 assists, respectively, for the Tigers (22-6, 11-1) and Kathryn Smith added six kills, four in the second set.

Georgetown jumped ahead 6-0 in the first set thanks to four errors from CU, a kill by Rachel Eubanks and a service ace from Martindale. Kills by Abby Shaw and Sheridan Jones helped the Bulldogs cut the deficit to 111-7, but that was as close as the home team would get. Three straight errors by Cumberland and two service aces for Martindale pushed the advantage to 19-11 en route to a 25-12 opening set.

The second set was almost identical, with Georgetown going up 5-0 thanks to four Bulldog errors and a service ace from Maher. Smith posted three kills in helping the Tigers build a 17-4 advantage before a pair of kills from Gass. Maddie Kunkel registered a service ace and Emily Weber collected a kill before the final spike from Maher secured a 25-11 set for GC.

Cumberland started much better in the final set behind an opening kill from Shaw, but three straight errors for the Bulldogs and a service ace by Mariah Tesarz helped the Tigers take a 5-3 edge. Two kills from Maher and another by Smith along with a second ace from Tesarz pushed the Georgetown advantage to 10-5.

Kills by Gass and Shaw kept CU in the set for a while, but too many errors once again aided the Tigers. Maher netted a kill and then posted two service aces before the final kill by Eubanks finished off the set, 25-14.

The outing began a five-match homestand for Cumberland that will finish the home schedule for the 2013 season. The Bulldogs take on St. Catharine College on Thursday at 6 p.m.