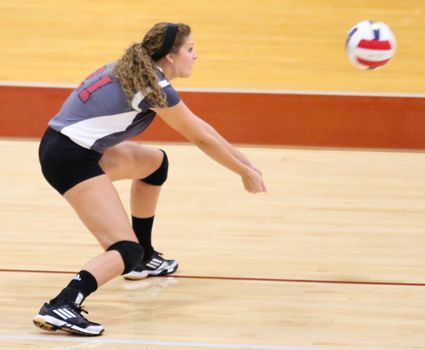 The Bulldogs (14-16, 5-9) were led by senior Mackenzie Gass who recorded 10 kills in her final home contest in a CU uniform. Gass’ sister Meghan, also playing in her final home game, led the team in both assists and digs with 18 and nine, respectively.

Cumberland controlled the pace from the opening serve in the first set, leading throughout in a 25-11 victory. Already leading 10-3, the Bulldogs used three kills from Abby Shaw and several attack errors from the Rams on a 10-5 run to extend the lead.

Back-to-back kills from Sheridan Jones off of assists from Kasi Wells completed a 4-0 run to give CU the opening set win.

Bluefield responded, opening the second frame on a 7-0 run forcing a Bulldog timeout. Cumberland answered with one of its strongest performances of the season, scoring the next seven points and 18 of the next 21, grabbing an 18-10 advantage. The squad would go on to win the set 25-15.

The third set proved to be the closest of the day, as the Rams played point-for-point with CU throughout. Mackenzie Gass kept the Bulldogs in the set with her best of the match, recording seven kills.

Following a kill from Michelle Evans to give Cumberland a 23-21 advantage, Gass put down a pair of kills to finish off the Rams, 25-23, and complete the three-set sweep.

Cumberland will finish off the season with four-straight road contests while gearing up for the Mid-South Conference Championships, set to begin November 15 in Louisville, Ky. The Bulldogs currently sit in seventh place in the conference with the top eight squads qualifying for the tournament.

CU’s next contest will come Friday at Shawnee State at 3 p.m. The club will remain in the state of Ohio on Saturday for a 10 a.m. match against the University of Rio Grande.