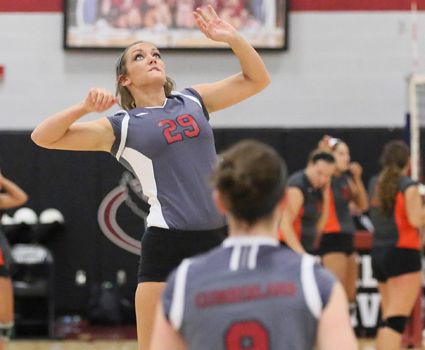 Abby Shaw led the Bulldogs with 12 kills in the match. (Credit Steve Wampler)

The Red Storm proved to be too much in the final set, as the squad jumped out to a 5-1 lead and holding on to a 15-8 victory to win the Mid-South Conference match.

Meghan Gass and Kasi wells combined for 30 assists, 16 and 14, respectively, to lead the squad. Laura Peavy and Jenna Pavan added 11 and 10 digs, respectively, for the Bulldogs.

CU has just two games remaining in the regular season before heading to Louisville for the Mid-South Conference Championships beginning November 15. The first of those final two games will feature the nationally-ranked No. 9 Lindsey Wilson. That match is set for Tuesday at 2 p.m. in Columbia, Ky.