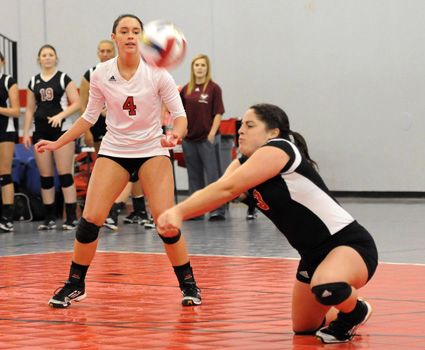 LOUISVILLE, Ky. – Abby Shaw led the Bulldogs with 11 kills while Kasi Wells handed out 11 assists and Meghan Gass posted 11 digs, but Cumberland started slowly in the final two sets and dropped a 3-0 decision to ninth-ranked Lindsey Wilson here Friday in the quarterfinals of the Mid-South Conference Volleyball Championships at Mid-America Sports Center.

The Bulldogs (14-21) end their season with the loss, the second one to the Blue Raiders (35-2) in the last 10 days. Sarah Anderson paced Lindsey Wilson with 12 kills and Kailey Moorhead and Alexa Just posted eight kills apiece. Just added 33 assists, keeping LWC undefeated in Mid-South action this season.

Cumberland started the match well, with Shaw posting three kills in the first eight points for a 5-3 CU edge. The Bulldogs and Blue Raiders were tied at 10 before LWC put together a 6-2 mini-run that included two kills from Anderson and one by Taylor Hayne. Moorhead tallied two kills during the stretch as well and two more kills by Anderson and one from Mattie Tigges pushed the Lindsey Wilson advantage to 22-18.

Shaw and Rylee Butler combined for a block, Shaw added another kill and Jenny Daniels and Michelle Evans had a block as well, but kills from Hayne and Moorhead closed out a 25-21 opening set for LWC.

Lindsey Wilson started quickly in the final two sets, taking an 11-1 lead in the second set behind three blocks from Anderson and Emily Meeks and kills from Anderson and Audra McNabney. The Bulldogs closed the gap to 12-7 thanks to a service error and two hitting errors by the Blue Raiders along with a service ace from McCrea Barney, but three setter attacks from Just and a kill by Moorhead pushed the lead back to 16-8.

Anderson had two more kills and McNabney added the final point in a 25-16 set victory for LWC.

The final set looked much like the previous one, with Lindsey Wilson rushing out to an 11-1 advantage thanks to two kills and three blocks from Hayne. Shaw and Mackenzie Gass collected kills and Sheridan Jones and Daniels combined for a block, but the Bulldogs never pulled closer than 12-4.

Anderson tallied three straight kills late in the set and Cumberland committed a pair of errors to finish off the 25-9 set for LWC, who advances to Saturday’s semifinals to take on the winner of St. Catharine College and Shawnee State.