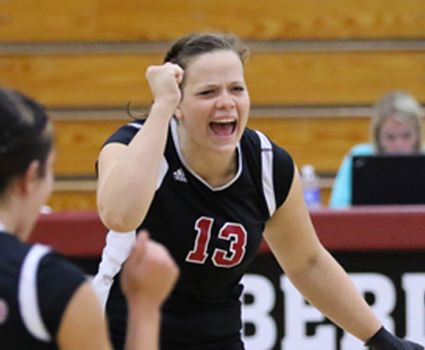 LEBANON, Tenn. – Michelle Evans and Maci Lerno each recorded double-digit kill efforts in Cumberland’s 3-0 loss at the hands of No. 5 Lindsey Wilson Thursday night at the Dallas Floyd Recreation Center.

Both the Bulldogs (8-7, 3-2 MSC) and Blue Raiders (15-3, 5-1 MSC) exchanged the lead three times and tied 10 times in the first set until Lindsey Wilson took a three point advantage at the 17-14 mark, forcing a Cumberland timeout. CU brought the score back within two, but fell in the first set 25-21.

Set two saw Lindsey Wilson take an early lead but Cumberland came back to tie the frame up at 11. LWC went on a 3-0 run before CU scored its next point, taking control of the set. The Bulldogs scored once more in the remainder of the set, falling 25-16.

Cumberland came out of the break strong to open play in the third stanza scoring five of the first eight points. The Bulldogs held a lead as large as four, two separate times during the frame but the Blue Raiders battled back to tie it up at 20 apiece. Lindsey Wilson scored five of the next seven points to win the match in three sets.

Cumberland wraps up its four-match homestand against Pikeville on Saturday.