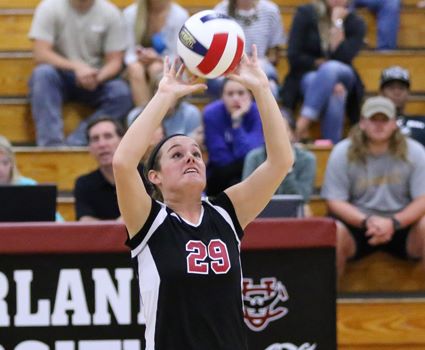 LEBANON, Tenn. – Maci Lerno posted her sixth double-double of the season, Sara Glassman handed out 41 assists and Kara Snell added 23 digs in Cumberland’s 3-1 volleyball victory over the University of the Cumberlands here Thursday night at the Dallas Floyd Recreation Center.

The Bulldogs (10-8, 5-3 Mid-South) won the first meeting against the Patriots in five sets nearly four weeks ago in Williamsburg but turned the tide on the visitors in Thursday’s match, overcoming deficits in the first and third sets and then jumping out to a big lead in the final set before hanging on for the win.

Lerno finished with 13 kills and 12 digs, leading three players with double-digit kills. Michelle Evans added 11 kills and Ashley Sherrick had 10. Caprisha Webster tallied the final three kills of the match and ended with nine kills while Amanda Worrell recorded eight in the balanced Bulldog attack. Glassman registered nine digs to go with her 41 assists as well.

The Bulldogs hit .203 as a team and won the opening set with a .290 hitting percentage despite seven service errors.

Cumberland led only twice in the set before the final points, at 12-11 and 13-12 after service errors for the Patriots. CU trailed 18-14 and 20-16, but kills from Webster and Lerno, a solo block from Lerno and another block by Lerno and Glassman pushed the home team ahead, 22-21. Two kills from Worrell and a block by Worrell and Lerno ended the set for the Bulldogs.

The second set played out about the same way, with the Patriots pulling ahead early but CU keeping it close thanks to consecutive kills by Worrell, Lerno and Evans. Sherrick had three straight kills midway through the set the tie it at 16 and Webster’s kill gave CU a 21-20 edge, but kills by Morgan Schlatter and Megan Ganser and an error by Cumberland gave the visitors the set, 25-23.

Neither team led by more than two points the entire third set and three kills from Lerno and one by Webster tied it at 11. Worrell and Evans added kills and the Patriots helped with three attack errors for an 18-16 CU advantage, but two kills by Schlatter tied the set at 20. After another kill from Schlatter, the Bulldogs finished off the set with consecutive spikes by Evans, Worrell and then Sherrick for a 25-21 set win.

The Cumberlands (16-4, 5-3) began the fourth set with four consecutive attack errors and kills by Webster, Worrell and Lerno made it 6-2 Bulldogs. Evans added a kill and Sherrick had three to push the advantage to 15-5, the biggest lead of the match for either team.

That’s when the Patriots made their comeback in the set though, this time thanks to three attack errors and a service error from Cumberland. Jessica Severs and Jennifer Philpot posted kills for UC, cutting the deficit to 16-12, but Lerno answered twice for the Bulldogs, ended mini-runs by the visitors.

Another service error from CU made it a 19-17 set, but Worrell’s block gave the Bulldogs a point and then the sophomore added a kill before Webster’s final three finished off the match.

Cumberland heads to Shawnee State this Saturday for an 11 a.m. Central Time match, the first of nine straight away from home for the Bulldogs.