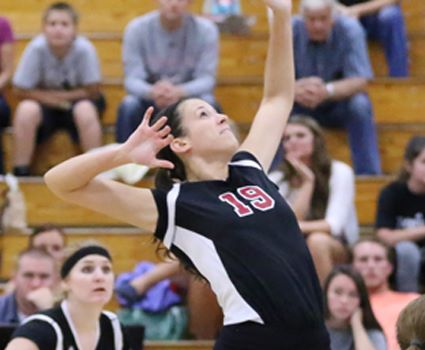 Sara Glassman collected three aces to go along with 53 assists while Kara Snell led the defense with 22 digs.

Both teams remained fairly even throughout the first set as there were 10 ties and four lead changes. Cumberland held its largest lead at four points at the 22-18 mark following an ace from Sara Glassman. Milligan scored just three more points before Evans recorded the last two points of the set giving Cumberland a 25-22 first set victory. Evans collected six kills while Worrell added five to aid the Bulldog attack.

The Bulldogs took an early lead to open play in the second, holding a lead of five with the score slated at 9-5. A run from the Buffaloes tied the set at 12 and MC took the lead on the next possession. Each team remained within one point of one another for most of the frame. Milligan took its largest lead at 22-19 following a kill from Emilee Linkous, but an Evans kill and two kills from Sherrick tied the set at 22. The score remained tied at 23 MC scored on the next two possessions to take the set 25-23.

Cumberland and Milligan exchanged points for the early portion of the third set. CU controlled much of the frame following a 5-0 run taking the lead at 15-10. Following a Glassman ace and an attacking error, the Buffaloes called a timeout. The Bulldogs remained in control out of the break as Lerno, Sherrick and Worrell each recorded kills. An attacking error from Milligan’s Samantha Bruinius gave Cumberland a 2-1 lead with a 25-21 set win. Seven services aces aided in the Bulldog attack in the frame, Lerno collected three while Glassman, Snell, Webster and Wiseman each added one.

CU stormed out of the gates in the fourth set scoring 11 of the first 15 points forcing an early Milligan timeout. Out of the timeout, CU scored two straight points to take a commanding nine point advantage. The lead moved to 10 after a Webster kill. Following a block from Evans and a Lerno kill, the Bulldogs reached match point. Cumberland won the match on an attacking error from Bruinius.

The Bulldogs wore pink jerseys in today’s match to recognize those who have been effected by breast cancer.

Cumberland will play Martin Methodist on Tuesday before wrapping up the season at home against Georgetown College and Shawnee State.