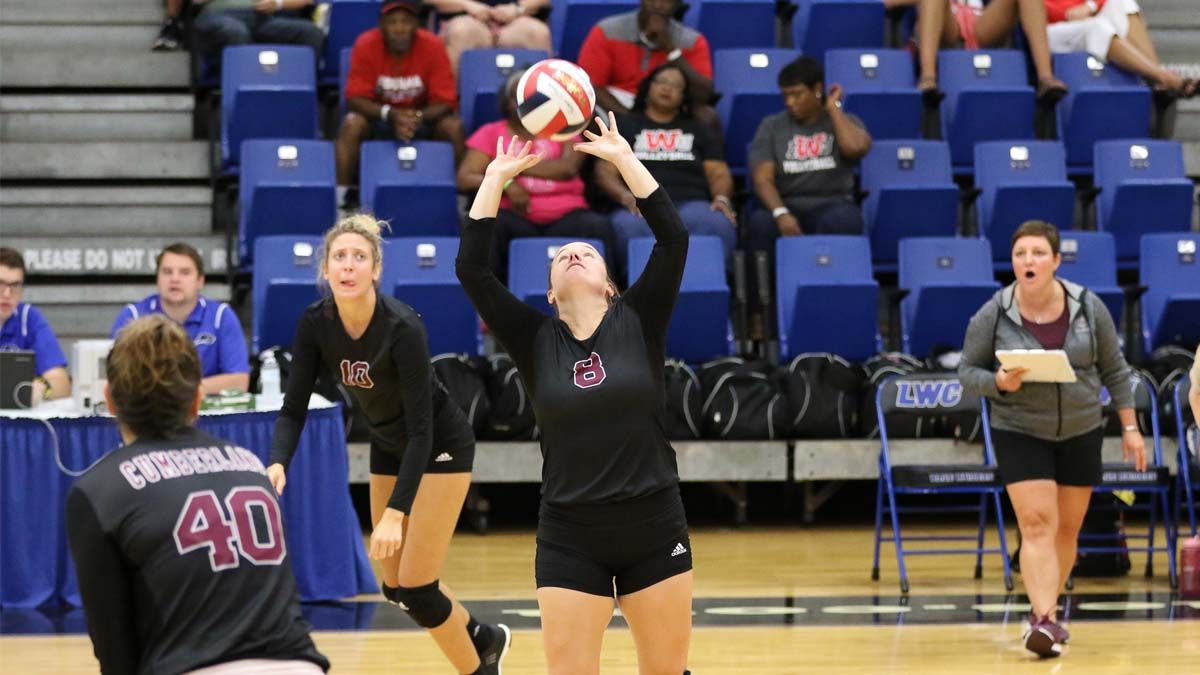 LEBANON, Tenn. – Junior Rachel Poole posted 34 assists for 11th-ranked Missouri Baptist leading the Spartans to a sweep over Cumberland in the opening match. Sara Glassman collected 27 assists, her ninth double-figure outing this season to help the Phoenix defeat St. Ambrose in three sets in the second game of the day at the Battle of the Arch on Friday in Belleville, Ill.

Errors played a huge factor in the opening match versus Missouri Baptist who had 22 and the Phoenix had 17. Cumberland (6-5) hit .250 in the opening set but just a total of .061 for the game and MBU hit .198. Cumberland added nine blocks and had 23 kills on 98 total attacks.

Cumberland found their way in the second match against St. Ambrose with two players posting double-figure assists and two others adding double-figure digs to help them defeat the Fighting Bees in three sets.

The Phoenix kept within two points of Missouri Baptist in the opening set before going on a 5-2 point run to take the lead for the first time, 14-12. The Spartans made a quick comeback with a kill and a service ace by Cigarini and an attack error on Cumberland. Three consecutive points for MBU extended their lead by four, 19-15.

A point from Caprisha Webster and an attack error on Marion Couraud pulled the squad within two points. The Spartans limited Cumberland to scoring just two more points in the set and a 5-2 run for Missouri Baptist closed out the opening frame, 25-20.

MBU got off to a quick start in the third set scoring three straight points but three errors on the Spartans and a point from Masa Nalovic and Abby Akins evened the score at five. Each team went point-for-point and tied the score three times but the Spartans tallied three points in a row to regain the advantage, 15-11. Cumberland notched two more points but Missouri Baptist went on to score six straight points to stretch the lead, 21-13. Errors on the Spartans scored six of Cumberlands last eight points of the set but MBU’s Ana Oliveira and Courad posted one point each to win the second set, 25-21.

Cumberland fell behind early in the final set with Missouri Baptist taking a 15-7 lead. Two errors and a kill by Mikayla Wickham kept the squad within nine but the Spartans continue to build on their advantage with two kills from Couraud, one from Cigarini and Oliveira and an error. Masa Nalovic posted the final kill for the Phoenix and two errors on the Spartans gave them their final two points. Errors were the deciding factor in the game with two on the Phoenix giving Missouri Baptist the 25-12 final set victory.

Cumberland seemed to find their way as they game went on, defeating St. Ambrose in the first set by just three points, the second by six and the third by nine.

A kill by Riley Hummert and two errors on the Phoenix gave SAU three consecutive points to start the second set. A point by Markovic and an error pulled them within one point and a 4-1 spurt tied the game at six. Six uninterrupted points for CU allowed them to regain a 12-6 lead. A point from Natalie Bocheneck ended the streak but the Phoenix quickly responded with a 4-2 run to stay ahead, 17-10.

St. Ambrose pulled within five points of the Phoenix but a kill from Nalovic, two from Amanda Worrell and a ball handling error helped the squad take the second stanza, 25-19.

A combined effort behind the offense gave CU a 7-1 lead in the third frame with two kills from Akins, two from Markovic and two from Mikayla Wickham. Cumberland stretched that lead to 11-3 and continue to pull ahead throughout the set. Five errors and three kills for the Fighting Bees cut their deficit to seven, 17-10.

The squad is back in action tomorrow, September 9 against Friends University at 9 a.m. and their final match of the tournament versus Lindenwood-Belleville at 1 p.m. The Phoenix host Lindsey Wilson College for their first conference game of the season on Tuesday, September 12 at 7 p.m.