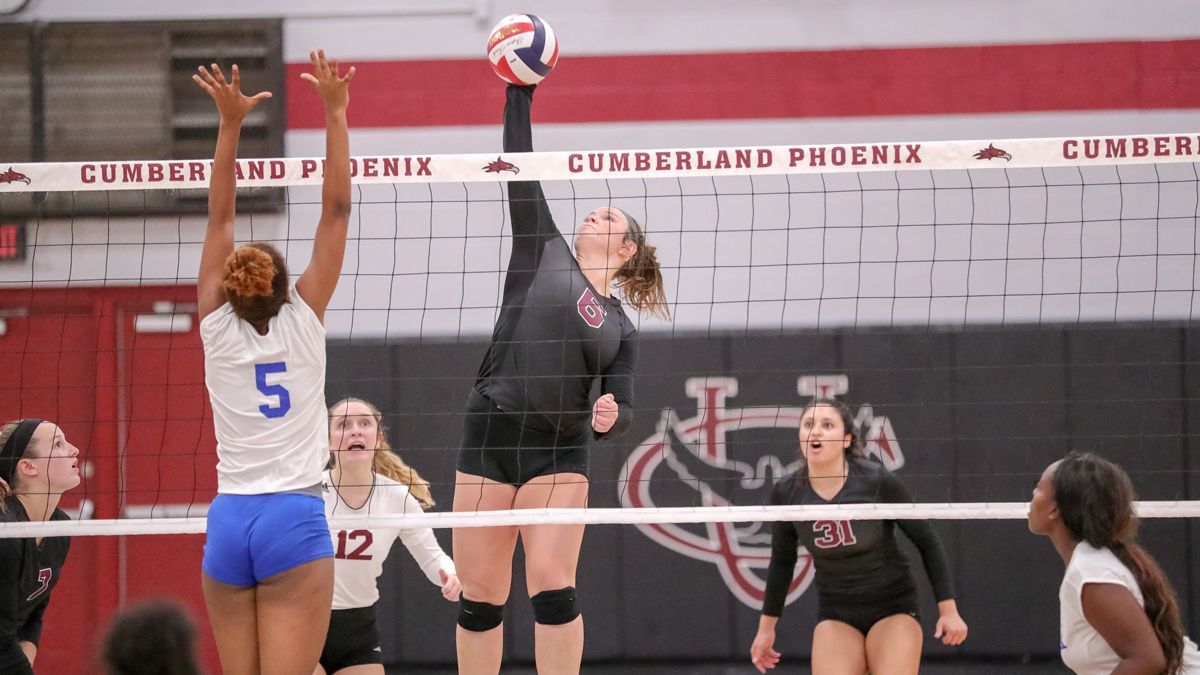 Campbellsville registered the last four points of the match, though, with kills from Miranda Wright and Savannah Moss as well as two errors by the Phoenix.

Cumberland jumped out to an 8-3 advantage in the first set thanks to kills from Akins, Nalovic, Mikayla Wickham and Nicole Carey, and two kills apiece for Akins and Moeller made it 14-8 Phoenix. Akins added another kill in the set before a final one by Nalovic.

Six Cumberland errors helped the Tigers take a 9-3 lead in the second set and two kills by Paige Merrick and one from Irene Baroni extended the advantage to 17-7.

The Phoenix trailed 22-13 in the set before a block by Luciana Arena and Nalovic ignited an 8-1 spurt highlighted by three kills from Akins and one by Arena as well as the duo combining for a block. The Tigers finished off the set, 25-22, thanks to a block by Sonia Flendrich, who led the home team with 17 kills, and Yelysaveta Sjarkova.

Akins started the third set with two kills and Nalovic and Arena added one apiece for an 8-4 CU edge. Wickham and Moeller added kills and Moeller collected a solo block for a 13-8 CU advantage.

Nalovic’s spike and a block by Akins and Moeller extended the lead the 17-10. Nalovic posted another kill and Arena collected a kill and a block before a service ace from Glassman made it 22-13. Arena and Wickham tallied a block and Wickham’s final kill finished the set for the Phoenix.

Two kills from Flendrich and one by Baroni helped Campbellsville to a 7-1 advantage to start the fourth set. Arena collected two kills and Moeller and Akins added one apiece to pull CU within 10-7, but kills from Flendrich, Cassidy Mull and Baroni got the home team back in front, 17-10.

Cumberland never got closer than five the rest of the set and kills by Mull and Sharkova kept the Tigers in the lead before a final spike by Flendrich ended the set, 25-19.

Moeller, Wickham and Akins recorded kills for the Phoenix early in the fifth set, but an 8-2 spurt by Campbellsville that included three kills by Flendrich put the Tigers ahead, 10-6. Kills by Nalovic and Serna helped the Phoenix get close before taking the lead and setting up the final points.